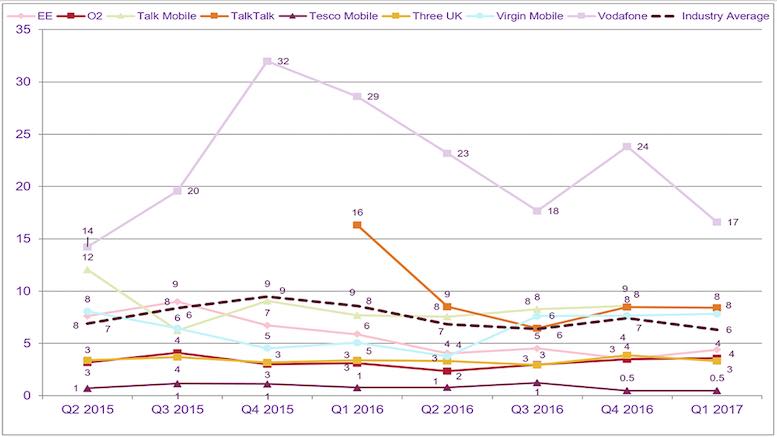 Every three months I write an article about Vodafone UK, and how inaccurate billing forces their customers to complain far more than any other mobile provider in the UK. This is the tenth such post. For two and a half years Ofcom, the UK regulator, has published quarterly stats which show they have received a level of complaints from Vodafone customers that was previously unprecedented for any British mobile telco. For the tenth time in a row, Ofcom says the main causes of Vodafone complaints are “issues about billing, pricing and charges” but fails to be more specific, fails to provide more granular data, fails to help customers, and makes excuses for Vodafone. I can only feel sorry for Vodafone’s long-suffering customers, though the relative good news is that Vodafone complaint rates have fallen to slightly less than three times the industry average, and is only double that of the next worst performing telco.

It is a sign of Ofcom’s institutional delusion that they once again observed in their report that:

The increase in Vodafone’s complaints per 100,000 subscribers in Q4 2016 was affected by a spike in complaint numbers following the news, published in October 2016, that Ofcom had fined Vodafone for mis-selling, inaccurate billing and poor complaints handling procedures.

The implication is that customers are only complaining because Ofcom has taken enforcement action. However, a quick look at the results in the quarters before and after the Q4 2016 ‘spike’ makes it clear that Vodafone would still have had much worse complaints figures than any other provider, irrespective of the impact of this bad news. And the ‘spike’ was still way below the peak level of complaints experienced back in Q4 2015, at a time when Ofcom was doing absolutely nothing to punish Vodafone for its woeful performance.

Ofcom is eager to excuse the Q4 2016 spike because it spoils a story where Ofcom will pretend their inept approach to billing accuracy regulation is somehow responsible for the eventual fall in complaints. This would be like King Canute ordering the tide to stop, being swallowed by the tide, drowning in the tide, having his dead body left on the shore when the tide recedes, and then one of his supporters claiming that Canute was successful because the tide has now rolled back.

Ignoring the Q4 2016 spike, whose supposed justification is not supported by any objective data that Ofcom has deigned to make available to the public, we can still compare complaint rates in Q3 2016 (18 per every 100,000 customers) and Q1 2017 (17 per every 100,000 customers). From this we can extrapolate that Vodafone’s level of complaints will fall back down to the industry average within three years from now. ***Slow handclap***