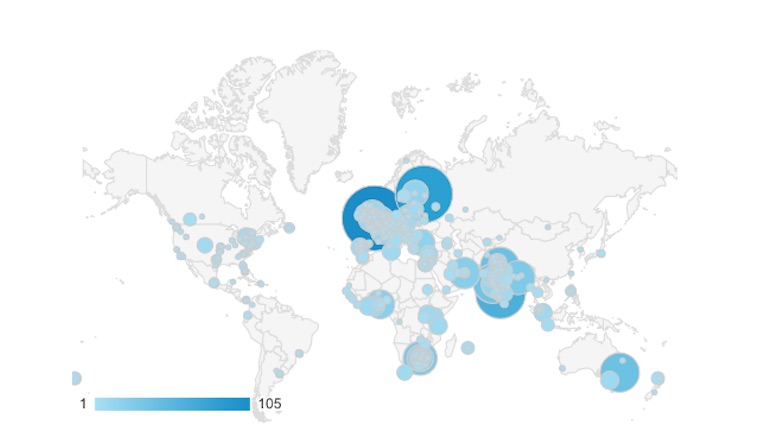 I admit that the headline for this article is a form of bragging. But look for yourselves at Google’s map (pictured) of who visited RAG’s website during RAG Online, the virtual conference run last week by the Risk & Assurance Group (RAG). Though far from complete, I have never heard of an event for telecoms risk and assurance professionals securing such a broad global audience. Google’s statistics say there were visitors from 470 cities across 93 different countries during the two days of the conference.

The longitude of the most Easterly visitor was 175.7° East, in Whitianga on the North Island of New Zealand. I can guess who it might have been, because a famous telecoms fraud expert lives there. The most Westerly visitor was at 125.3° West, in Campbell River, Canada. I know who that was because she told me she stayed up late to watch Joseph Nderitu’s presentation. Campbell River is 19 hours behind Whitianga, but the advantage of an online conference is that it could reach both of them, and many people between.

RAG Online took the place of RAG’s London conference, which was postponed because of coronavirus restrictions. It is hence unsurprising that London topped Google’s charts by being the location of 105 visitors. Google reported that London was followed by Saint Petersburg (81), Bangalore (60), Delhi (40), Sydney (39), Mumbai (36), Randburg (29), Kolkata (28), Dubai (23), Reading (21) and Lagos (21). Analyzed by country, the United Kingdom and India generated just under 20 percent of traffic each. India had been slightly ahead at the close of the first day, but the UK crept into the lead by the end of the final day. South Africa was a long way back in third place, representing six percent of all visitors, narrowly ahead of the USA and Russia in fourth and fifth place respectively. Some of these results might also be linked to the audience of Commsrisk, which has always been greatest in the USA, UK and India.

45 percent of RAG’s traffic came from Europe, 27 percent from Asia, and 15 percent from Africa. The audience was patchiest in South America, which is to be expected for a conference held in English. There were no visitors from mainland China, despite it being the world’s most populous country, but there were some in Taiwan and Singapore. The American audience was likely impacted by the time differences, with most of the content streamed before the average North or South American gets out of bed. However, that did not stop Timo Vainionpää, boss of AurorA International Telecommunications in Waterloo, Canada, from rising early to watch the whole conference. Timo wrote on his blog that:

The sessions began at 7:30 AM London time (2:30 AM in Waterloo, eek!) but I listened to the whole event from start to finish.

Fábio Carvalho of Comcast also tweeted to say he was watching in the middle of the night.

Whilst Fábio and Timo were determined to watch the whole event, Google’s statistics suggest that many viewers chose to join and leave the live stream several times during the day. Google’s method of measuring the duration of sessions fails to work if only one page of a website is viewed, as was the case for the majority of visitors to the conference webpage, but the data still suggests that many viewers watched only the specific talks of interest to them, with the number of viewers changing rapidly in the gaps between. The conference producer monitored the stream at all times, and he observed that audience figures tended to peak during the live Q&A at the end of each session. This might be explained by the audience for one presentation remaining until the Q&A was completed, whilst new viewers were connecting to the stream in anticipation of the following session.

I wish I could tell you how many questions and observations were submitted by the audience, but they had to be deleted at regular intervals to help with their management, and it seems that it will not be possible to recover them. Each presenter and panel certainly received more questions from the audience than could be answered in the time available.

Lengthy breaks were included in the schedule to avoid putting too much strain on the underlying technology. This proved wise, as one break was completely consumed with rewiring broadband connections to reverse the progressive degradation of the live video calls. The need for these gaps in the schedule, coupled with the geographic range of the audience, suggests we should better utilize the audience’s attention by asking them to participate in surveys during future virtual conferences. For example, it would be possible to create an online questionnaire that could be completed in 30 minutes, and then to remind viewers about the survey before the beginning of each break. Only a modest proportion of the total audience would need to respond across the two days of the conference to accumulate more comprehensive data than is typical for telecoms risk surveys. It would also be exciting for viewers to know that the results could be presented to them at the conclusion of the conference, instead of waiting months to learn how they compare to others. However, the challenge would be in constructing a well-designed online questionnaire, then rapidly analyzing the data so the findings could be presented and discussed before the conclusion of the event. This would be too great a burden for RAG to manage alongside the work involved in planning and running a virtual conference, but it would be interesting to hear from any potential partners who would like to conduct such a survey in future.

RAG Online was not perfect, and there were plenty of technical glitches during the two days of the conference, but the results speak for themselves. This virtual conference was eagerly supported by speakers from many different countries, who all appeared for their live sessions at the agreed times. The event reached an audience that was far greater than we expected, and the viewers asked more questions than could be covered in the time available. The workload was intense, and I cannot complain if the conference producer decides he never wants to do another, but many of the participants expressed a desire for more online conferences in future.

We all know that coronavirus has changed the world, and none of us know what will be considered normal when the pandemic is over. Perhaps we will return to the desks in our offices, or we might find there has been a permanent shift towards working from home. However, this event shows the potential to use electronic networks to bring telecoms risk and assurance professionals together like never before. Events of this scale can be used to showcase the very best work done by risk professionals worldwide, and so inspire many more telcos to follow their lead. If you have not seen them already, watch the recordings of the entire conference and judge the quality of the content for yourself.