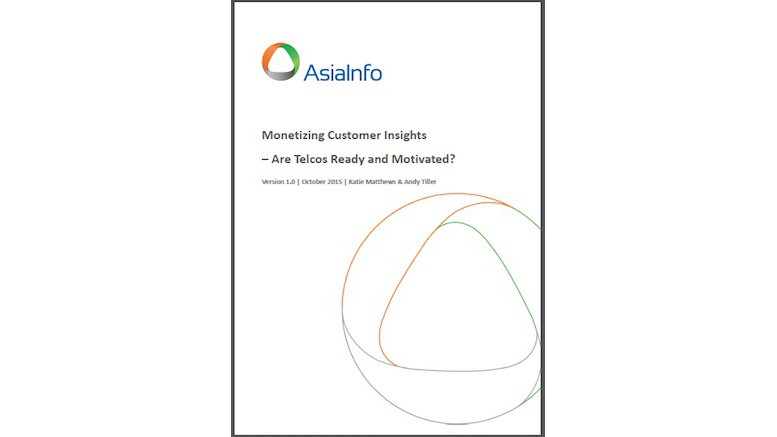 A new telecoms industry survey on how to monetize analytical insights into customers has been conducted by IT and software provider Asiainfo, with help from research firm Analysys Mason. 50 telcos were surveyed around the world, with answers being supplied by a range of managers from Sales, Marketing, IT and Product Management. The results are available in an 18-page white paper, which can be downloaded for free after registering your details. However, I am not sure it was worth giving them your personal data in exchange for what they learned, because they only learned things that you probably know already. To give you a flavor of the report’s contents, here are four observations that the authors considered important.

1. When it comes to making money from customer data, telcos are behind Google, Amazon and Facebook.

I doubt anybody needs to run a survey to reach this conclusion. Of course telcos are behind the big internet players!

It would be more helpful to measure how far telcos are behind. But then, the problem with doing research like this is that asking a Marketing Director for an objective measure of how far they are behind Amazon is like asking a lawyer to objectively measure the difference in quality between two legal systems. Common sense tells us things may be better or worse, but that does not mean we have a useful objective scale for measurement. And even if you did have an objective scale, Marketing Directors never get an unbiased measure of anything. So the big headline ‘fact’ from the report is measured using the peculiar scale of time:

Though the headline is not specific, the report makes it clear that most telcos thought it would take two or more years to ‘close the gap’ on the big internet players. This means they foresee a future where telcos are the equal of Google. Do they really believe this? If the respondents imagine a point in the future when their telco will be as sophisticated as Google, then presumably they also imagine being better than Google. I would argue a radically different picture is much more likely. That picture looks like two lines that start far apart, and diverge even further over time.

2. Only 8 percent of telcos can target a personalized marketing message at an individual subscriber.

Most telco marketing campaigns are aimed at groups of subscribers that number in the thousands, and few telcos have the ability to be more granular in their approach. It was heartening to learn that four of the surveyed telcos could personalize marketing messages to the individual customer. However, the white paper does not follow up by explaining what this means in practice. How personalized is a personalized message? This is the key question, but no real-life examples of campaign personalization are presented.

3. If you do not do something, it is easier to blame the regulator than to blame yourself.

When asked what are the biggest constraints on using data to gain customer insights, respondents said the biggest obstacle was the imposition of regulatory restrictions over the use of data. Forgive me, but that is a lame excuse for business failure. Does anybody in Google or Facebook say they would use data, but they cannot because the regulator will not let them? No. They hire lawyers, they lobby governments, they use the data, they publicly justify how they use the data, and when necessary they fight in court to defend how they used data.

It seems incredible that telco managers believe they can catch-up with the big internet players, whilst also having a timid attitude to compliance. Is Facebook so afraid about how it complies with EU data protection laws? Or to cite a different kind of example, was Volkswagen so timid about environmental safety regulation? And do not tell me that telcos are cautious because they really care about safeguarding personal data; security breach after security breach tells everybody a contrasting story.

All surveys suffer from bias, and the response to this question is the prime example of bias in this survey. When a company lacks the will to do something, it is always easier to blame a convenient external bogeyman like a government or regulator. There are rules to protect customer data, but the scale of the obstacles to using data are routinely and conveniently exaggerated by telcos who never had much impetus to use data anyway. For example, the report cites German rules that prevent data being sent for processing overseas. So what? Germany is an advanced country with the fourth largest economy in the world. Not sending data abroad may increase the cost of processing the data of German customers, but it does not forbid the processing of their data. Treating an increase in costs as an insurmountable barrier suggests the potential for improved monetization must be pretty limited.

It is to the credit of the report writers that they obliquely admitted to the bias in the answers they received.

Interestingly, the survey results suggest that ‘fear of losing customer trust and loyalty’ is a relatively minor concern for operators across all regions. This is perhaps surprising given the criticism operators routinely take when they misuse or fail to protect their customers’ personal data. Indeed McKinsey cites this public perception issue as the most challenging hurdle preventing operators from realizing the opportunities provided by big data and advanced analytics…

…It’s possible that the explanation again lies with the sequential nature of the barriers: if regulation or lack of access to data are preventing an operator from starting out on the journey, it’s unlikely that customer concerns over data privacy will be the primary consideration just yet.

4. Telcos want more real-time context and personalization of marketing offers, but are opposed to boosting marketing through machines learning how customers behave.

When asked about the future use of personal data and analytics, telcos were most in favor of real-time contextual awareness enabling an immediate response to customer needs. They were also very keen on improved personalization of offers made to existing customers. However, the respondents were strongly against the use of machine learning to improve market segmentation.

Again, I suspect that bias explains these answers. If you have a job, you want to make your job more important, not less important. Technology that makes you important is good; technology which makes you redundant is evil. Returning to the question of just how personalized is personalization, it seems that the respondents want telcos to be more responsive to customer needs and to give them a more personalized response so long as somebody in the Sales and Marketing Department gets to define what all those responses will look like. Like taxi drivers faced with Google’s self-driving car, they are unwilling to hand their keys to a machine. They may be right for the moment; the technology may not be ready. But the technology will only be ready after people start experimenting with it.

Machine learning is the obvious end-point for the analytical evolution. Why get a person to define an instant ‘personalized’ response based on predetermined rules, when a machine can learn to do a better job than any human could? That would be like paying a chess grand master to play on your behalf, even though there is software that routinely beats the grand master.

So what did I learn?

In truth, this survey taught me more about human bias than it did about monetizing customer analytics. Analysys Mason did a reasonable job of trying to handle the bias in the answers they received, but they were hamstrung by the problem that opinions are not facts, and what sounds like a good answer may not be the best approach in real life.

The big internet players are successful because their primary model is driven by what technology can do. They continuously push the limit of what is possible, and that leads to fights with governments and regulators. In contrast, telcos feel like organizations where what is possible is defined by observing what others have already done, and asking what employees are willing to do. With that mentality, the telcos will never catch the big internet players.

Perhaps this report really signals that telcos believe customer analytics and monetization can only have a minor impact on their success. A different kind of corporate strategy would care less about advanced analytics that seeks to make a few extra pennies here and there, and be more interested in managing the telco’s relationship with its national government, in the hope of using legal and natural barriers to obtain semi-monopolistic profits. When businesses think like that, it makes more sense not to upset those government relations for the sake of challenging the legal limits for processing customer data.

The overall impression I get from this survey is quite gloomy. Despite saying they intended to catch up with Google within a few years, the respondents admitted that implementing analytics to improve profits is not very important to telcos. Even worse, the people employed to monetize data are comfortable with keeping things that way. The full title of the report is: “Monetizing Customer Insights – Are Telcos Ready and Motivated?” Sadly, the answer is no.