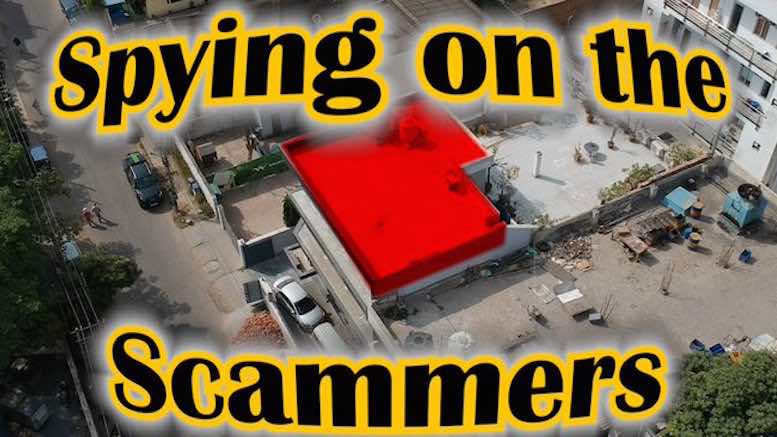 Jim Browning deserves a medal for hacking into call centers run by fraudsters, and revealing the ways they work. His most recent exposé forced Indian police to arrest the bosses of a scam call center that charged thousands of dollars to remove fake malware from the computers of victims in Australia, Britain and the USA. Browning spied on the scammers by hacking into their own CCTV and call recording systems. Through patient and determined detective work, Browning was then able to identify the exact location of the call center, in a hidden office behind a legitimate office tower, and the real names of the fraudsters who worked there in shifts. Browning’s YouTube channel has just completed sharing a four-part series about the criminal outfit, entitled Spying on the Scammers. You can watch all of the videos below, but here are five key takeaways before you do.

As well as using CCTV and call recording systems to monitor the work of their employees, the management of the scam call center also forced their staff to hand in their mobile phones at the beginning of each shift, as shown in the second episode of Browning’s series. Perhaps this requirement was imposed to prevent workers from capturing any incriminating information. It is also possible that the bosses were worried about employees conducting their own scams on the side, as the staff received only a tiny fraction of the amount they took from victims.

Browning presents an organization chart for the scammers in episode three of his series, and explains the careful way the bosses who devised the scripts rely on intermediaries to maintain their distance from the staff inside their call centers. These intermediaries pay cash bonuses to the staff who work the phones, if they meet their targets for scamming victims. The wall of the call center even displays an inspiring picture and quote from Steve Jobs:

Great things in business are never done by one person, they’re done by a team of people.

Browning discloses that two people acted like consultants to the boss of the scam call center, advising him about how to make money from fraud. Although they clearly gave instructions for how to commit crimes, these criminal advisors complained to YouTube that their privacy had been violated, even though their faces were blurred on the videos and their full names were not revealed.

4. The Scammers Do Not Care Who They Steal From

It might be tempting to think of the scammers as Robin Hood characters, taking money from people in rich countries in order to feed the poor in India. That illusion is shattered when Browning’s videos show a group of fraudsters laughing about the tears being shed by a vulnerable man who has just been duped into giving them all the money he had, or listening to the audio of a victim who is a multiple sclerosis sufferer who has diabetes and is legally blind. BBC interviews of other phone impersonation fraudsters confirmed the ruthless streak they all share.

Behind a pair of mirrored sunglasses, Piyush is telling me how he made a quarter of a million dollars. “It was easy money,” he says, detailing how he bought fancy cars and wore designer clothes.

“We used to target the old people,” he says. “There are many old people in the US who don’t have families, are alone and are disabled, so it’s very easy to trick them.”

5. The Failure to Deal with Spoofing is Central to the Scams

In Browning’s videos you hear the fraudsters make up stories about living in California and visiting its beaches, although they are actually located in Gurgaon, India. Their lies would not be tenable if the telecoms industry had solved the issue of caller ID spoofing. Browning was able to pinpoint the real location of the criminals and the methods they used to disguise the origin of their calls. Our trillion-dollar industry needs to lead the way on protecting phone users, instead of relying upon a lone hacker to notify law enforcement about the real sources of scam phone calls.

You can watch all four parts of Spying on the Scammers below, and anyone wanting to support Browning’s work can make donations through Patreon or PayPal.