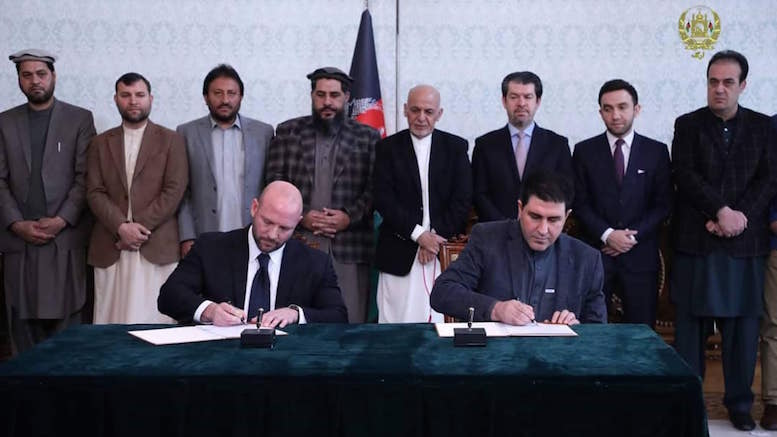 Aghanistan’s Minister of Communications and Information Technology, Shahzad Aryobee (pictured, seated right) has signed a USD11mn deal for the implementation of a ‘Real Time Data Management System (RTDMS)’ that will monitor the revenues of Afghan telcos. The contracted supplier is… nobody that you have ever heard of, unless you take an interest in obscure defunct airlines. Joshua Bustos (pictured, seated left) is described as the Chairman of Bustos Group LLC, and his LinkedIn profile makes it clear he is an airline executive. Bustos’ most important role was CEO of Safi Airways, which was Afghanistan’s largest private airline until it ceased operations in 2016 because of unpaid debts and taxes.

The announcement of the deal from the Ministry of Communications and Information Technology clearly states the scale of the contract:

Based on this contract, BUSTOS Group LLC Company will create a system for collecting 10% tax of the telecommunication services in 4-6 months, and also the Company is responsible of the operation, capacity development and maintenance of the system for up to 15 months.

Refreshingly, at least one local expert has denounced this national revenue assurance contract because of its obvious flaws. Farshid Ghyasi, CEO of Kabul-headquartered ICT business NETLINKS, slammed the deal in an article published by Afghanistan’s Khaama Press News Agency:

The American company who was awarded the $11 Million project by the Afghan Government got their business license a day after the contract award in the United States!

The Ministry of Finance, Ministry of Communications and IT and the Telecom Regulatory Authority failed to in place (sic) an automated system which should meet the global standards of revenue assurance and fraud detection of Telecom revenues. In year 2018 NPA released an expression of interest and only 4 companies submitted their interest and were short listed for the RFP round and were invited to bid for the project:

Sources say that NPA evaluated technical proposal of the above companies but before evaluating their financial proposals, the tender was cancelled for unknown reasons. Vanrise Solutions and Subex Services are both companies with past experience in Telecom and revenue management. It is said that the price proposal for these two companies were in the range of $7 to $8 million dollars and the budget allocated for the project was between $6 to $8 millions. Comparing these companies with Bustos Group LLC, one cannot come up with any logical reason on why the contract was awarded at $11 millions to a company who was not even in the list and was single sourced.

Ghyasi has a point. I cannot comment on all of the above-mentioned businesses, but some will be familiar to regular Commsrisk readers. For example, Subex is the second largest vendor of telecoms revenue assurance products and services in the world. They were founded in the early 90’s and they rank amongst the pioneers of telecoms revenue assurance. Subex’s RAFM systems are now used by telcos all around the planet. This USD11mn contract would be roughly equivalent to 20 percent of Subex’s global annual revenues, but they were beaten by a business whose experience in telecoms revenue assurance is zero. So how does a business with literally no track record of delivering solutions of this type win a contract ahead of the second most popular supplier of these solutions globally?

Bustos may just be a really good salesman. Bustos’ profile for the Air Retail Show Menasa 2016 says he is not only “a commercial aviation executive with over 19 years’ experience of running airlines around the world” but he is also “a professionally trained spokesperson and has done both television and radio interviews along with speaking at major governing institutions”. Perhaps Bustos will give a presentation at a future telecoms conference about the challenge of rapidly recruiting a team to audit real-time network signaling after winning your first ever contract for that kind of work.

Another explanation for this deal may lie in the tendency for national governments to copy the incompetence and corruption of each other. Ghyasi alleges that the real supplier will be LATRO Services, a reputable business that will also be known to regular Commsrisk readers.

LATRO Services who is in the business of SIM card fraud detection is the sub-contractor for this project is expected to do all the job. They are currently working with GSM operators in Afghanistan such as Roshan, AWCC and others in the area of SIM fraud detection or more simply SIM Box detections in Afghanistan. Why wasn’t this contract directly awarded to LATRO Services who will be doing the job?

The likeliest answer to Ghyasi’s question is that Afghanistan is following the precedent of other countries who massively overspend on new technology to do ‘real-time’ auditing when the only genuine financial benefits will flow from their underlying reliance on cheaper but proven methods of detecting bypass, such as those already supplied by LATRO to telcos. That seems to be the outcome with the similarly expensive national RA contract in Ghana.

Ghyasi is not the only Afghan who is critical of the deal. TOLOnews reported that…

…an official from the Integrity Watch Afghanistan said there are deliberate attempts aimed at hindering transparency in the process of collection of telecommunications taxes.

“Our assessments indicate that Bustos Company does not have the ability to implement this system,” said IWA researcher Naser Taimuri. “There are some motives inside and outside government which obstruct the system to be implemented soon.”

Unlike some people in this industry, Ghyasi is not afraid to call out corruption when he sees it.

While writing this report, I have been advised by a number of friends that my article will upset a lot of high level government officials involved that could potentially harm me and my business, however, the harm that the corruption in this project will do to my country is much higher than the harm that I may suffer as a result of this. Furthermore, my strong belief that H.E President Ghani is a honest and clean person who believes in the fight against corruption gives me the strength to stand up and raise my voice.

Due diligence for telecommunications revenue assurance technology providers is not that hard. Intelligent people could find several suppliers more credible than Bustos Group after a few hours of googling, or after ten minutes of reading Commsrisk. But some governments are either unable or unwilling to source revenue assurance systems directly from the suppliers with the most experience and knowhow.

Corruption is made possible by governments willing to pay peculiar middlemen with no relevant experience for the implementation of a single centralized telecoms auditing system. Even if the deal is not actually corrupt, it appears corrupt to use selection processes that hinder and exclude the leading global suppliers of revenue assurance solutions.

The governments of some poor countries have allowed the concept of national telecoms revenue audits to become perverted, suggesting their purpose is to make money by exploiting power, instead of doing anything of real value. I fear some aspire to use the new monitoring systems to milk ordinary people by levying taxes every time they use their phones. The biggest scandal is not that Afghans will pay an excessive price for an unproven system designed to covertly collect tax through higher phone bills, but that the absence of any coordinated cross-border condemnation is encouraging this corrupt practice to become an international norm.