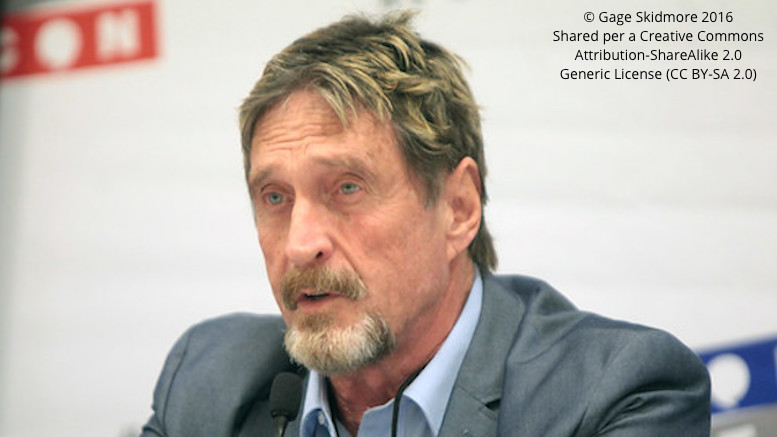 It is a measure of how rapidly the world is changing that the headline for this article would have been gibberish in the year 2000. John McAfee, founder of pioneering anti-virus business McAfee Associates, has been indicted in the US of pump-and-dump securities fraud. McAfee is charged with using his profile on Twitter to promote niche cryptocurrencies to boost the value of investments held in the name of his associates so they could be sold for a quick profit. When challenged on Twitter, McAfee repeatedly denied having any stake in the cryptocurrencies featured in his ‘coin of the week’ tweets. McAfee is also accused of receiving fees to promote initial coin offerings (ICOs) whilst publicly denying that he accepted such incentive payments.

The scale of the alleged profits made by McAfee, his executive advisor Jimmy Watson and their cryptocurrency team was outlined in a statement by Manhattan US Attorney Audrey Strauss.

The defendants allegedly used McAfee’s Twitter account to publish messages to hundreds of thousands of his Twitter followers touting various cryptocurrencies through false and misleading statements to conceal their true, self-interested motives. McAfee, Watson, and other members of McAfee’s cryptocurrency team allegedly raked in more than $13 million from investors they victimized with their fraudulent schemes. Investors should be wary of social media endorsements of investment opportunities.

The pump-and-dump schemes were in effect for a few months at the end of 2017 and beginning of 2018.

From in or about December 2017 through in or about January 2018, McAfee, Watson, and other McAfee Team members collectively earned more than $2 million in illicit profits from their altcoin scalping activities while the long-term value of the recommended altcoins purchased by investors declined substantially as of a year after the promotional tweets.

The fees generated from ICO promotions were even more lucrative than their scalping schemes.

From approximately on or about December 20, 2017 through on or about February 10, 2018, McAfee, Watson, and other McAfee Team members collectively earned more than $11 million in undisclosed compensation that they took steps to affirmatively hide from ICO investors. In each instance, McAfee and Watson failed to disclose to ICO investors that the ICO Issuers were paying the McAfee Team a substantial portion of the funds raised from ICO investors for their touting efforts, despite knowing that they were required to disclose such compensation under federal securities laws.

McAfee may have tried to distance himself from his cryptocurrency promotional schemes soon after they began. On 27th December 2017 McAfee claimed his Twitter account had been hacked after his phone had been compromised.

Other security experts mocked McAfee at the time his Twitter account was hacked, suggesting they found McAfee’s behavior to be suspicious.

The disclaimer after the "help my twitter account's been hacked!'' warning is priceless. No more "coin of the day"? Where ever will I get my altcoin investment advice now? https://t.co/AN4EevLINl

McAfee has already been detained in Spain since October 2020 after he was charged with tax evasion.