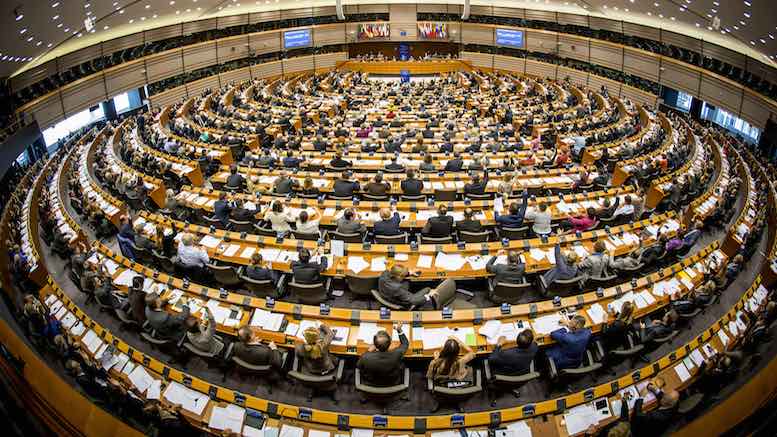 A little over a year ago the European Commission released its proposal for a Directive on copyright in the Digital Single Market, which is currently being discussed in the European Parliament (pictured above).

The content of the proposed directive has attracted substantial commentary, particularly with regard to provisions intended to introduce a new neighbouring right for press publishers (Article 11) and obligations for hosting providers in the context of what has come to be known as the ‘value gap’ problem (Article 13).

Last week Professors Lionel Bently (University of Cambridge) and Valeria Falce (Università Europea di Roma) were in Rome to discuss the content of the proposed directive.

Here’s what they think:

“After a tortuous journey and conflicting opinions amongst the EU institutions (the Commission, the Committees of the European Parliament, the Council), the approval of the draft Directive on copyright in the Digital Single Market is around the corner.

The goals are sound: to adapt copyright to the digital ecosystem and the challenges of new technologies; to strengthen the effectiveness of rights and to promote an enriched relationship between the authors/publishers and the general public; to safeguard a “free and pluralistic press” and to guarantee “quality journalism and easy access to information for all”.

The key challenges are shared by the different parties: addressing the radical changes brought by the digital economy, which overwhelm the publishing industry and requiring adaptation of traditional business models; facilitating circulation of works and the licensing system; and allowing publishers and authors to participate with “equal arms” in the value chain.

The proposed solutions to these problems are however controversial, as the Commission, Council and Parliament swing between compromise attempts and sudden reevaluations.

The divisions are most pronounced in relation to two provisions of the proposed Directive: i) Article 11 — with which the European Commission proposes to introduce a new right in favour of press publishers to ensure the sustainability of the sector against new forms of exploitation promoted by aggregators and online operators; and ii) Article 13 — through which it is intended to control platforms and Internet Service Providers (ISPs) that host and make available content.

Article 11 is inspired by similar rules recently introduced in Germany and Spain. Experience with these regimes as yet does not suggest that the proposed reform will do much to sustain newspaper publishing or the quality of local journalism. Outside Italy, the point has been made that many of the difficulties facing publishers can be more proportionately solved by a presumption that they hold rights in the content of their publications, rather than through the creation of a new “ancillary right” in any “fixation of a collection of literary works of a journalistic nature”, with the uncertainty necessarily attendant on ascertaining the scope of such right. From an Italian perspective, Article 11 does not add much to the legal framework.

Different difficulties arise from the current wording of article 13 and its associated recitals. Many of these difficulties derive from the fact that the proposal seeks to intervene in a complex legal ecosystem, where there are established instruments: the 2000 eCommerce Directive, the 2001 Information Society Directive, the 2004 Enforcement Directive and a raft of jurisprudence of the Court of Justice of the European Union (CJEU) which has interpreted these through the lens of fundamental rights as recognized in the EU Charter.

First and foremost, the definition of legal entities to which the new obligations apply, is hopelessly uncertain. Article 13 refers to “information society service providers that store and provide to the public access to large amounts of works or other subject matter uploaded by their users,” and thus hands over to the CJEU the unenviable task of identifying whether “large” implies 200 items or 200,000 or somewhere in between. The draft JURI Committee Report sensibly seeks to replace “large amounts” with a criterion relating to the character of the activities rather than the volume of content. That amendment would limit the application of the provision to information society service providers that are actively and directly involved in the making available to the public of user uploaded content and where this activity is not of a mere technical, automatic and passive nature.

Secondly, the proposed Directive states that these operators “should take appropriate and proportionate measures to ensure the protection of such works… for example through the use of effective technologies.” The provision refers to the filtering and content tracking techniques already used in other industries, such as the music industry. However, the CJEU has already held (twice) that such technologies are incompatible with Article 15 of the eCommerce Directive and fundamental rights and freedoms of the platforms and their users (including their personal data). For this reason, amendments in several of the Parliamentary Committees and in the Council Working Party would delete specific reference to filtering technology, which appears to be the only acceptable way forward.

Thirdly, the proposal uses the terms “communication to the public” without clearly referencing Article 3 of the Information Society Directive, where it relates to a distinct concept. Implicitly insisting on the conclusion that any service provider that stores and provides access to the public to subject matter uploaded by their users is “communicating to the public,” Recital 38 ignores the CJEU’s instruction that every case should be assessed on its facts. Nor can any assumption be drawn from the recent Pirate Bay decision that hosts that store largely lawful material, but also some unlawfully uploaded subject matter (prior to receiving take down notices) are liable of copyright infringement for communicating the unlawful material to the public. Indeed, the CJEU has stated that communication depends on an awareness of the effects of an intervention (a criterion that is hard to fulfill when the host is unaware of the material that has been uploaded).

A similar objection can be made in relation to the manner in which Recital 38 appears to promote a particular interpretation of Article 14 of the eCommerce Directive, which offers certain hosts immunity from financial liability as regards illegal material. While the CJEU has emphasized the importance of knowledge and control over content as the key matters that transform a host into someone to whom the immunity is inapplicable, the Commission controversially implies that the immunity vanishes as soon as a host is involved in any “optimization of the presentation of materials or promotion of such.”

Ultimately, while the Commission appears to pursue a clear objective (reviewing the set of responsibilities) through a bold framework, because the proposed Directive lies within a network of pre-established instruments Article 13 is likely to become a legislative bull in a fragile legal china-shop. It will at the very least introduce “large amounts” of uncertainty, or, worse, obscure the obligations of the subjects involved.”