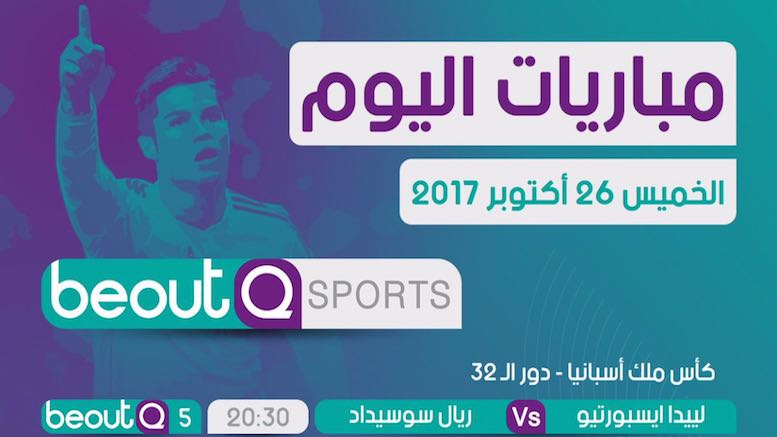 You may have heard of beIN Sports, a spinoff of Qatar’s Al Jazeera network that streams live sporting events such as the English Premier League. But unless you live in Saudi Arabia, you are probably not aware of beoutQ sports, a pirate TV channel. I would share the link, but you cannot reach their pirate website unless you live in Saudi Arabia. However, you may guess what they show on beoutQ: they stream all the channels of beIN Sports, except they cover up the beIN logo with their own!

The crooks behind beoutQ have taken advantage of the breakdown in diplomatic relations between small Gulf emirate Qatar and its big Saudi Arabian neighbor. The Saudi government is critical of the output of Al Jazeera, and so included a block of Qatari television channels amongst the sanctions it has levied this year. Whilst most of those sanctions have no impact on the ordinary Saudi citizen, blocking beIN has cut a legitimate source of English Premiership football… and many Saudis are fans of the English game. The pirate beoutQ channel solves that problem for the Saudis, without forcing them to make an exception for part of the Al Jazeera media empire. As a consequence, the authorities are not very motivated to close down the pirates.

Inside World Football reports that the Qataris are treating the pirate channel as a “thinly veiled direct assault” upon their business. Multiple letters of complaint have been sent to the Saudi government, and each has been ignored. But that will not stop the Qataris from lobbying. On the contrary, they have gone into lobbying overdrive:

To enforce their point and in a bid to shut beoutQ down, beIN has teamed up with FIFA, the English Premier League, UEFA, Spain’s LaLiga, the Ligue de Football Professionnel (LFP) in France, the International Olympics Committee (IOC), the All England Lawn Tennis Club, the United States Tennis Association, Tennis Australia, the American National Basketball Association (NBA), as well as anti-piracy body the Audiovisual Anti-Piracy Alliance (AAPA) to form a lobby group.

Imagine how many letters they will write as a result of consolidating their lobbying! However, beoutQ claim they are doing nothing illegal. Their website asserts:

We do not host any video content on this site. All copyrighted content to their respective owners. We encourage all copyright owners to recognize that the links on this site are located elsewhere on the web. The embedded link refers to the video website. Please direct all copyright infringement issues to the companies that host these files and not to publish them. If you notice something irregular or some copyright abuse please send email to iplay20000@gmail.com.

beoutQ also claims to be a partnership between “Colombian and Cuban broadcasting companies,” which adheres “to laws in both countries.”

This kind of piracy illustrates how intellectual property law relies upon enforcement at a national level. When governments do not play along there is not much overseas rightsholders can do about it. Whilst the diplomatic conflict between Saudi Arabia and Qatar is relatively unusual, the issue of who can effectively police the international streaming of television will keep coming back in many guises.