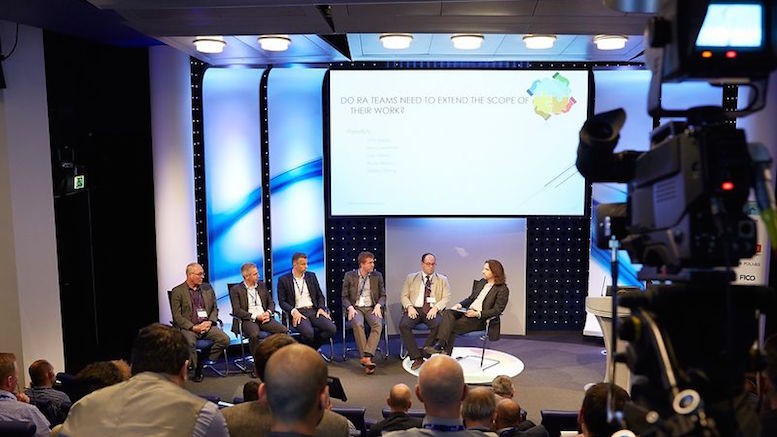 I find myself in an impossible situation. Normally I like to occupy a niche that few others can, providing an impartial perspective on developments in telecoms risk and assurance. Having brought so many speakers, sponsors and attendees together, the Summer Conference of the Risk & Assurance Group deserves to be reviewed. However, as one of the architects of the agenda I must rely on others to supply that review. If asked who was my favorite from the 38 speakers who took part, my answer would have to be all of them! I can only express immense gratitude to everyone who took the time and trouble to contribute to last week’s conference, whether they were on stage, in the audience, providing sponsorship or performing all those supporting tasks which are so vital to success. Thank you all.

Though I cannot provide an objective review, I must find a way to reflect on a conference that I believe will prompt important changes to how we approach our duties. Writing just two days later – when I would like to be relaxing – I must observe how much more work I now need to do. Let me call for your help, just as many of you helped us with the RAG Summer Conference. Many hands make light work, and whether you traveled to London or not, we will need many more helping hands to realize the ambitions that came out of the event. Over the course of two days we were presented with idea after idea that deserves to be acted upon. Based on the surveys we ran and the audience response at the event, there was plenty of support for the proposals. So rather than reviewing the conference, let me summarize some of the big ideas that were put forward, and which we now need to act upon.

It was no surprise that education would feature so heavily, with several telco managers covering education as part of the case studies they presented. Keynote speaker Bernice DeMarco set the tone by emphasizing the importance of developing and retaining the people in her team whilst explaining the evolution that had occurred within BT. The audience’s interest in education partly reflected dissatisfaction with what was available on the market. This was made obvious when Marcus Bryant interrupted his case study on MTN’s RAFM education program to poll the audience about training providers they had used.

I was surprised at how few said they had used GRAPA, though perhaps some were intimidated by anti-GRAPA comments during earlier presentations. Nevertheless, the low scores for effectiveness confirm we have a serious problem with the choice of training options available. I would go further and speculate the scores would be even lower if effectiveness was more explicitly linked to relevance. As Marcus pointed out, accountancy training may be excellent but will not be necessary for most RAFM tasks. One action to take away is to build upon Marcus’ findings by doing more extensive research on the training courses that telcos want for their risk and assurance staff. Marcus may also come under pressure; he was asked to release the MTN training content to a wider audience. I can imagine rival telecoms groups would prefer to buy that content rather than duplicating the effort Marcus put into developing MTN’s program.

Part of the problem with asking for training material to be released for wider use is that it ignores the important role played by the tutor. Online courses are useful, but there are limits to what can be done without a human teacher in the room with the student. But when we get tutors involved, it becomes challenging to find the money to pay a suitably-experienced tutor to fly to the students or vice versa. Nixon Wampamba also observed the difficulties of getting decent RAFM training in Africa during his presentation, and whilst Shoaib Qureshi shared some examples of the excellent ERM training and awareness program that Ooredoo developed he also told us how cunning he had to be in order to get executives to back his program.

There was one aspect of education that needs improvement and which does not need a tutor to be in the room with students. Hugh Roberts pointed out, then Mark Yelland echoed the need to apply statistical science to our work. It was telling that when Hugh asked who had received formal education in statistics only one hand in the audience – Anat Hoida of FICO – went up. I had to sadly counter that the chapter on statistics in Revenue Assurance: Expert Opinions for Communications Providers was probably the chapter readers were most likely to skip. Teaching statistics will achieve little unless practitioners are encouraged to incorporate statistics into their work. But it is right that we should be using more statistics, and that begins with ensuring everybody has the essential skills, raising us toward the standard of data scientists.

On the topic of improving education the conference generated more questions than answers. However, David Smith may have gifted us a way forward. He opened our closing panel with his personal ‘audit report’, which emphasized that most of the challenges we face today are no different to the ones we had ten years ago. With characteristic generosity he offered to share his formal proposal for a collaboratively-developed training program with inputs from both academia and industry practitioners. David’s proposal was also written 10 years ago, when he was a director at the Global Billing Association, but my reading of it confirms it as pertinent to today as it ever was. So now the onus is on me to drive the formation of the working group that David envisioned in his proposal, by pushing the RAG to review and adopt David’s proposal, whilst I promote it on Commsrisk. This will occur in the coming weeks, so stay tuned!

It is easiest to visualize education as a formal, classroom-based activity. However, the importance of networking, communities, informal relationships and the sharing of advice was also reiterated throughout the event. That came through very clearly when I asked Stacy Graham of ANPI why she devoted so much of her own time to the running of the CFCA. After all, Stacy had flown from the USA to talk to us about the CFCA’s global fraud survey. Nobody in the room could fail to be impressed by Stacy’s answer, which expressed the pride and pleasure she takes from the opportunity to meet and connect with her fellow professionals.

Perhaps Hugh Roberts found the best word to summarize where RAG should be headed as an organization. He called for the creation of a guild of professionals in our line of work. I agree with Hugh, and feel that is what we are working towards, though we will only get there through a patient incremental approach. The need for a guild was reinforced when chatting to speakers and other guests during the evenings. Colleagues like Stacy, Rene Felber of the TM Forum and Theresa Whelan of the International Telecoms Risk Forum were keen to explore how we could collaborate further. I was also glad that several of the visitors from overseas talked about bringing RAG-type events to their countries. Given the effort involved in planning the RAG Summer Conference it is important not to promise too much, but we should give this serious consideration.

Jack Wraith knows a few things about managing communities of professionals, after running the Telecommunications UK Fraud Forum for 16 years. His closing advice was that information sharing is most likely to occur when there is a trusted intermediary who can collect the intelligence that telcos are willing to share, then pass it on to others so the source remains anonymous. He also said this would be a full-time job for somebody, which implies raising the money to pay that person’s wages. RAG is not in a position to do that, but I think the advice is sound, and we need to think about funding models as we go forward. On the other hand, I am very keen to ensure we maximize participation by minimizing the costs of taking part. These conflicting goals will be difficult to reconcile, but maybe we can find ways to imaginatively close the gap by ensuring everybody gets valuable intelligence which can equally well be applied to enhancing operations inside telcos or refining products developed by vendors.

It can be hard to visualize progress when we talk about ideas that are so big and intangible that we struggle to imagine the small steps needed to walk towards them. So here is a brief (and incomplete) list of other actionable suggestions that came out of the event. Let us see how many we can put into practice!

Having written myself a long to-do list, I also need to step back and think about what are realistic targets for RAG. We want to keep moving forward, and ambition is good. We also need to be practical; little good will be done if the volunteers on the RAG Committee burn themselves out. Now is a good time to contemplate ways we might reform the structure of RAG, so the load can be spread across a greater number of shoulders. We see we have sympathy and support for what we are trying to do, so let us also see if we can harness that enthusiasm and put it to good use.

A lot of work went into the RAG Summer Conference. I am grateful to everyone, from the fabulous BT auditorium team to the eager microphone handlers to photographer Tom Luddington who captured so many golden moments, some of which have already been uploaded to the front page of the RAG website. Chairman Rob Chapman worked like a Trojan and handled proceedings with aplomb. Hayley Daniels moved mountains and did so much to manage the sponsorship and logistics of the event. Though unable to attend, John Preston continued to provide wise counsel to his fellow committee members. Thanks go to BT for welcoming us to BT Centre, and we are grateful to their executives for already offering their auditorium for next year’s summer conference. And I am doubly thankful to Bernice DeMarco, who was a gracious and generous host, and who gave a compelling keynote presentation.

I expect that Bernice and many of the RAG crew feel the same way as I do today: like a marathon runner recovering from the latest test of his stamina. But the funny thing about endurance events is that after you have accomplished them, you have a strange hankering to go even further next time…

Update 14th July 2016: An earlier version of this article incorrectly stated that Marcus Bryant created the MTN Group RAFM training program. The program was developed by Elgiva Sibisi and Ritu Hukku of the MTN Group Processes and Controls team.

Some RAFM Vendors Should Be Excluded

How Not to Report Telco Tax Compliance

Who Is in Your WhatsApp Group?

Commsrisk Top Ten for May 2020

Fraud Is Not a Source of Competitive Advantage