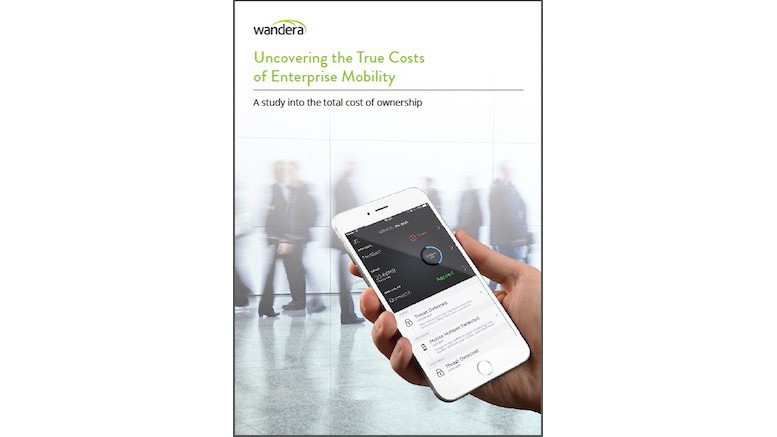 A new white paper from Wandera, specialists in mobile data security, claims to have “uncovered the true costs of enterprise mobility”. Their most startling finding was that:

Wandera engaged Redshift Research to survey 1,000 IT managers in the US and UK, and asked them about the amount their businesses spent on mobile phones during the past year. The focus was on TCO, which allowed them to make the helpful observation that the cost of enterprise communications includes more than the price of the handsets and the operator’s tariff. They also asked the surveyed businesses about the costs of: IT resources required to manage the devices; services deployed to assist with their management e.g. Enterprise Mobility Management (EMM); mobile security software; and the cost of remedying mobile security breaches.

By adding these additional costs, the perceived annual cost per device was more than doubled, to USD1,840 in the USA, and GBP1,272 (USD1,843) in the UK. Included in that cost are unanticipated usage charges – mostly for roaming – all of which have been categorized as ‘bill shock’ by Wandera. I am unclear whether these charges really would come as a shock, but it is valid to ask if these costs should have been budgeted for, and better controlled by educating staff and placing restrictions on data use. The authors explain why big businesses are more susceptible to unexpected usage charges.

Larger enterprises are, generally speaking, less cost sensitive than smaller ones – this is illustrated by the typical spend on devices. Larger enterprises therefore tend to employ less scrutiny over an individual employee’s excessive data use or roaming charges, and they are more likely to require their employees to travel to emerging countries where data costs can be extraordinarily high.

The survey also found that:

I am not surprised at the reported cost of cleaning up breaches; it is the nature of risk visibility that sensible amounts are spent on prevention only after experience has taught an expensive lesson. But the number of reported mobile breaches was much higher than I anticipated. Verizon’s data breach report said that mobile malware had only a peripheral impact compared to other causes of breaches. It is possible that Wandera are including lost and stolen handsets within the number of breaches. A missing handset can also mean data has been compromised, but the relevant mitigation involves training staff about the appropriate use of mobile devices and storage of data, as much as it demands an investment in security software.

The authors observe there are several ways for businesses to reduce the TCO for mobile communications. Investments in security software and training are likely to pay for themselves by reducing the amount spent on dealing with data breaches. Data compression can be used to reduce usage, and caps would prevent bill shock.

Anyone interested in security and risk management for enterprise mobile communications will find more useful detail in Wandera’s survey. Their white paper can be downloaded for free, by registering here.