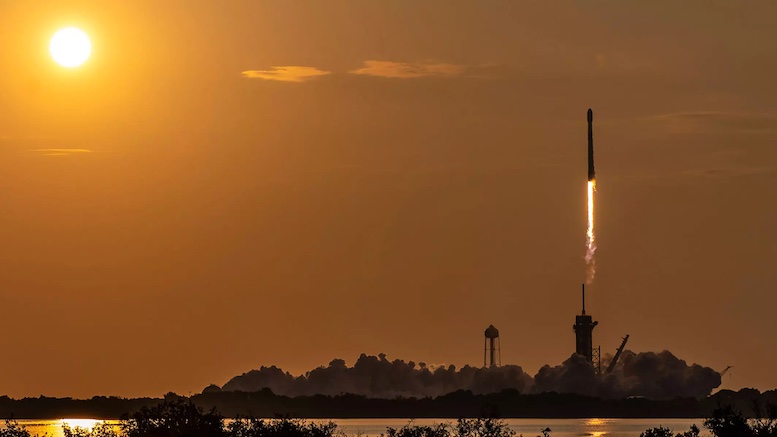 Followers of Chinese military propaganda have observed a burst of warnings about US investment in communications satellites, with a particular focus on the Starlink low-Earth orbit satellites launched by Elon Musk’s SpaceX (pictured). Although these satellites are clearly designed for peaceful communication, some within China would like them to be perceived as offensive weapons. They are now establishing the rhetoric that will be used to tell ordinary Chinese people why their military is investing in technologies designed to destroy Starlink communications satellites.

Commsrisk readers will be aware that the purpose of Starlink is to rapidly expand the delivery of broadband internet to rural areas. Many more Starlink launches are planned for the future, but their coverage is already so extensive that Starlink quickly agreed to turn on their service in Ukraine and send dishes to the government after they asked for assistance with keeping their communications systems online in the immediate aftermath of the Russian invasion. Starlink’s mission is inherently peaceful, but that will not stop some from trying to denounce it. For example, there are people who claim that harsh language on the web is the equivalent of physical violence; they will use this rationalization to argue they should censor the service provided by Starlink. However, if words can be violence then China’s government would already have conquered all its detractors, given their routinely bellicose condemnations of anyone they oppose. Per the South China Morning Post, one especially paranoid article in the official newspaper of the Chinese military claimed the true objective of Starlink is ‘barbaric’.

The ambition to militarise Starlink and its barbaric expansion deserve high alert from the international community.

This new propaganda message follows recent strategic research funded by the Chinese military which recommended they develop weaponry capable of destroying Starlink satellites. The study was published in a peer-reviewed Chinese journal entitled Modern Defence Technology and was jointly authored by several leading Chinese military scientists led by Ren Yuanzhen, who works for the Beijing Institute of Tracking and Telecommunications, part of the Strategic Support Force of the People’s Liberation Army (PLA), the principle military force in China and the armed wing of the Chinese Communist Party. They concluded that the Chinese military needs “a combination of soft and hard kill methods” to disrupt thousands of Starlink satellites in a cost-effective way, given that the satellite constellation could continue to function adequately if losses were fewer. The researchers noted that China is already capable of using missiles to destroy satellites, but the cost of using missiles to disable Starlink would be prohibitive. Though not described in the article, it is more likely that the Chinese military would seek to disrupt Starlink using a mixture of hacking, jamming and microwave weapons that could fry sensitive satellite components.

The researchers sought to justify their recommendation by observing how the engines on board a Starlink satellite could be used to ram it into other space hardware. Whilst this would be possible in practice, it seems unlikely that the Chinese military are genuinely concerned by this risk. Any such ramming mission would also damage the Starlink satellite too. It is much more likely that Starlink satellites will fail to maintain their orbit and will fall downward than being boosted upwards to clash with hardware that the Chinese could choose to place at higher altitudes. If the US intended to destroy Chinese space hardware via one-for-one ramming raids then their enormous numerical advantage means China is very unlikely to ever develop a technology that could wipe out every US satellite before the US attack had succeeded. And whilst the success of SpaceX means the Chinese government has control of far fewer satellites, the truly cost-effective solution would involve launching many more Chinese satellites into low-Earth orbit, thus negating the numerical advantage the US currently enjoys.

The real reason the Chinese government fears Starlink is that it threatens their control over the information presented to Chinese citizens. As demonstrated in Ukraine, even the incomplete roll-out of Starlink satellites is enough to keep people connected to the internet. The Chinese government knows that they could destroy the majority of Starlink satellites but the remainder could still be used to communicate with millions of Chinese citizens. Their policy is hence to intimidate through the threat of destroying billions of dollars’ worth of assets if Starlink ever adopts policies that clash with those of the Chinese Communist Party. Musk often presents himself as a free speech absolutist, which makes him unlike Western media bosses who have typically acceded to the censorship demands of the Chinese government just to gain access to Chinese markets.

It is especially notable that many of the people who normally claim to be worried about foreign disinformation campaigns seem completely unconcerned about a recent barrage of attacks upon Musk’s character. The kinds of autocrats they supposedly fear are signaling their intention to destroy Musk’s communications satellites but none of Musk’s harshest critics stop to ponder if the social media accounts used to denounce Musk might not all be as genuine as they first appear. This makes me wonder if foreign disinformation campaigns have already succeeded in fundamentally shifting the axis of public debate in Western countries. If Musk is correct that platforms like Twitter are massively underestimating the number of fake accounts then there may be widespread error in perceptions about the extent to which public debate has been manipulated. Even if he is wrong, there should be more robust and independent examination of the extent to which private communications businesses like Twitter have allowed their services to be compromised through the use of accounts that are covertly controlled by governments and other propagandists.

The Chinese and Russian governments have adopted increasingly convergent attitudes towards media censorship within their own countries and media influence in other countries, whilst also ramping up investment in military hardware and increasing the frequency with which they test the resolve of NATO and various governments in Asia and Eastern Europe. Though ideologically distinct, their strategies are converging and becoming mutually dependent because they are the two permanent members of the UN Security Council who can be relied upon to excuse each other’s abuses. China’s interest in anti-satellite weapons mirrors that of Russia, which conducted an overtly aggressive test of their missile systems by destroying one of their old satellites in November. This prompted an agitated US government to talk about respect for property rights in outer space, as if the tyrants who sent 100,000 troops to invade Ukraine would fret about violating international law. The missile test was one way for Russia to warn Western democracies about the potential response if satellites were used to work around state censorship. However, the superior economic and technological strength of China means they discuss more effective countermeasures without resorting to a grandstanding exhibition of brute force.

I have written before about US politicians who would like their country to actively pursue a policy of using satellites to deliver uncensored internet access to countries with authoritarian governments. It is difficult to imagine a more credible threat to rulers who believe their survival depends on controlling what ordinary people are told. This also represents a potentially massive shift in the international order, on a scale not seen since the internet first changed how people obtain information and communicate with each other. It is difficult to build up a decisive advantage by possessing more guns, tanks, and fighter planes than your enemy, as Russia demonstrated through their failed attempt to capture the capital of Ukraine. However, the Russian and Chinese governments have successfully strived to give themselves a decisive advantage in the information being presented to their respective populations.

Russians are encouraged to believe the war in Ukraine is just a special military operation designed to protect Ukrainians from neo-Nazis, and that Western support for Ukraine is so costly that the UK will soon resort to cannibalism. Meanwhile, the Chinese are told Uyghurs benefit from special education and training when this is merely a pretext for the brutal annihilation of their culture and ethnicity. Everybody who works in communication needs to be clear about their moral position on the free flow of accurate information because the consequences transcend national laws and borders.