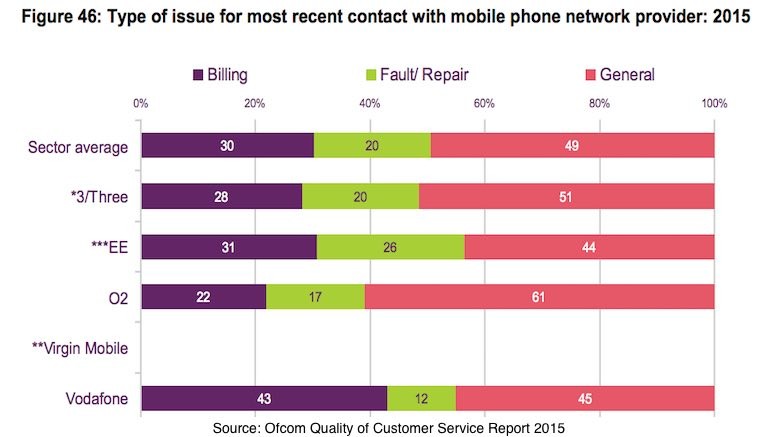 There is no doubt that Vodafone UK has some serious problems with the billing of mobile services. The worst-kept secret in the UK telecoms industry has been corroborated over four consecutive quarters by the complaints data collated by Ofcom, the UK comms regulator. Now further confirmation comes in the shape of Ofcom’s 2015 customer service satisfaction survey. Vodafone’s postpaid mobile customers would find the report to be grim reading – once they have cut through Ofcom’s waffle and found the data that really matters. To make life easy for you, here are the key statistics relating to Vodafone.

Ofcom has three categories for customer contacts: billing issues; faults and repairs; and other queries. Billing issues are common but not dominant; it is rare for any telco to have more than a third of their contacts relate to billing. However, 43 percent of contacts received by Vodafone UK relate to billing (see diagram excerpt above). This is 13 points higher than the mobile sector average of 30 percent. Amongst UK mobile providers, EE has the second-highest proportion of contacts relating to billing, at just 31 percent.

And if you wondered, the total number of Vodafone contacts and complaints was above average for the UK mobile sector, so the significance of Vodafone’s billing contacts is not being exaggerated by receiving fewer contacts in the other two categories.

Customers were asked whether their queries were completely resolved within one contact. For billing issues, Vodafone had the worst record amongst all UK mobile providers; they only resolved 36 percent of billing issues during the initial contact. This was 6 points lower than the sector average of 42 percent, and 6 points lower than the next worst performer, EE. Vodafone’s 2015 performance was down 15 points compared to the 51 percent resolution rate they achieved in 2014.

Customers with complaints are least likely to be satisfied with Vodafone

Though these satisfaction numbers relate to all categories of complaint, we can reasonably infer that billing was a significant cause of dissatisfaction amongst Vodafone customers. This is because Vodafone received so many queries about billing, and resolved so few of them, compared to its competitors.

I am baffled that Ofcom spends public money on surveys like this, but does not release the full data tables. If this were an opinion poll of voting intentions, we could all drill into the detail of the raw data. Because Ofcom refuses to share the base numbers, we are denied the opportunity to perform simple but valuable analysis, such as identifying the relationship between customers who had unresolved billing issues, and those who say they are less likely to use a provider in future.

However, the scale of the numbers presented here is highly suggestive. All of this data indicates that Vodafone’s billing is a mess. Vodafone receives more complaints about billing, and it is struggling to resolve them. When Vodafone customers complain, they are generally left dissatisfied, and they are most likely to switch supplier.

If we cannot map the relationship between the billing-related causes and the effects on customer satisfaction, it is only because the UK regulator only believes in a superficial version of transparency. I believe the full data would teach us all a valuable lesson about the extent to which billing issues can poison the customer’s perception of their telco.

You can obtain the Ofcom Quality of Customer Service Report 2015 from here.