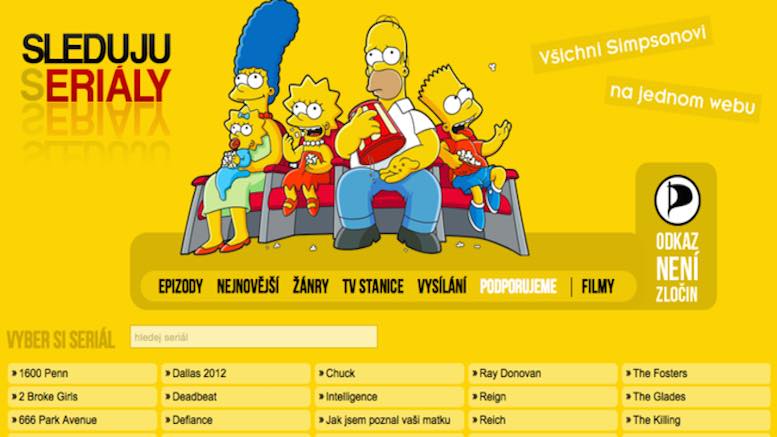 Is it against the law to run a website that has links to other sites where users can obtain TV programs that infringe the rights of the copyright holder? This is a question that is going to keep coming back in one guise or other, so get used to it. A recent legal judgment in the Czech Republic is especially fascinating, as it applies a key decision by the EU’s top court, and relates to a case where politically-motivated pirates deliberately challenged an anti-piracy consortium.

The case before the Czech court follows on the heels of cases in Sweden and Germany about how to apply the seminal decision of the Court of Justice of the European Union in GS Media. The result was considered ‘interesting’ by Juraj Vivoda of Marek & Partners, who goes on to explain…

In 2011 a 16-year old teenager from the Czech town of Liberec was accused and two years later found guilty of a crime that consisted of embedding on his own website (cinemaworld.biz) films protected by copyright. Nicknamed the ‘Liberec Pirate’, this case involved a classic ‘embedded links’ scenario where the embedded links pointed to works uploaded and stored on third-party websites.

The Czech division of the Pirate Party (CPP) strongly criticized the ruling and started a campaign claiming that “linking is not a crime”. The CPP also declared an open war against the Czech Anti-Piracy Union (CAPU) that often represents rightholders in similar cases. To make their argument, the CPP even went as far as creating its own website, sledujuserialy.cz, translated as “I Watch TV Shows” (pictured above). Visitors to the website were able to post embedded links to episodes of various TV series.

The CPP was pleased when the legality of its openly provocative website was tested in criminal proceedings brought before the District Court for Prague 4 (Obvodni soud pro Prahu 4).

Before applying the criteria provided by the CJEU in its recent case law on the right of communication to the public within Article 3(1) of the InfoSoc Directive, the Czech court reviewed earlier national decisions of the Czech Supreme Court on hyperlinking. In particular, the Court highligthed how in all previous cases, a profit-making intention of the operators of websites providing hyperlinks to works protected by copyright and made available without authorization of the rightholders had been present and established. In this way, the Court distinguished the facts of the CPP case from the facts of previous national cases.

The Czech court then turned to CJEU case law, namely the judgments in Svensson, BestWater and – most recently – GS Media.

As for the application of the GS Media test, the Court referred to paragraphs 47 to 49 of the judgment to conclude that where embedded links are provided to works made available on another website without the authorization of the relevant rightholders, it must be first established whether such embedding was carried out with the intention to make a profit. The Court inferred from GS Media that where embedded links are not provided for profit, it must be presumed that the website operator did not know and could not have known that the initial communication was unlawful. In contrast – the Court noted – where links are provided for profit, the knowledge of illegality of initial communication must be presumed.

The Court held that where it can be established that the website operator knew or could have known that the hyperlinks point to works illegally uploaded on the internet, for example on the basis of the fact that the operator has been notified of this fact by the relevant rightholders, it must be concluded that the provision of such hyperlinks constitutes an act of ‘communication to public’ within the meaning of Article 3(1) of the InfoSoc Directive.

In determining whether the CPP website was operated for profit, it satisfied the Court that no advertisements were placed on the CPP website and that no connection had been established between one particular seller of T-shirts (with the slogan “IwatchTVshows.cz and I don’t intend to stop”) and the CPP as an operator of the website. Based on these considerations, the Court held that the CPP had no knowledge of the illegality of the initial communication.

Notify or nothing: the ‘no knowledge’ presumption

In applying this (new) presumption, the Court acknowledged that the CAPU had notified in writing the CPP that its hyperlinks pointed to works initially communicated without the authorization of the relevant rightholders. However, the court concluded at the same time that since the CAPU had failed to demonstrate to the CPP its authorization to represent rightholders by providing the relevant power of attorney as requested by the CPP, the presumption of ‘no knowledge’ could not be rebutted. Taken together, the Court found the CPP not liable of copyright infringement which, under the Czech criminal laws, can be committed only intentionally.

There are two interesting aspects of this case, though note that the decision is only provisional.

The first is that the Court interpreted the notion of ‘profit making’ quite broadly (ie any advertisements on the website and not just profit resulting from clicking on hyperlink – similar to the German application of the GS Media judgment).

The second is that, in determining whether the website operator had knowledge of the illegal nature of initial communication, the court applied the GS Media presumption without considering whether the knowledge and, for that matter, the intent, could have been established in some other way (ie “could have known”). The fact is that the Pirate Party operated its website as a form of protest (although the CPP chairman is cited as saying that it was operated to achieve “a functional balance between the rights of authors, distributors and consumers of works protected by copyright”) and to demonstrate disagreement with the CAPU practices.

All in all, it seems that the Czech judgment is hardly a big win for the Czech Pirate Party. The Czech court established a heightened legal standard for notification, but that does not change the reality that upon its receipt, website operators will probably still be held liable unless they remove the hyperlinks in question.