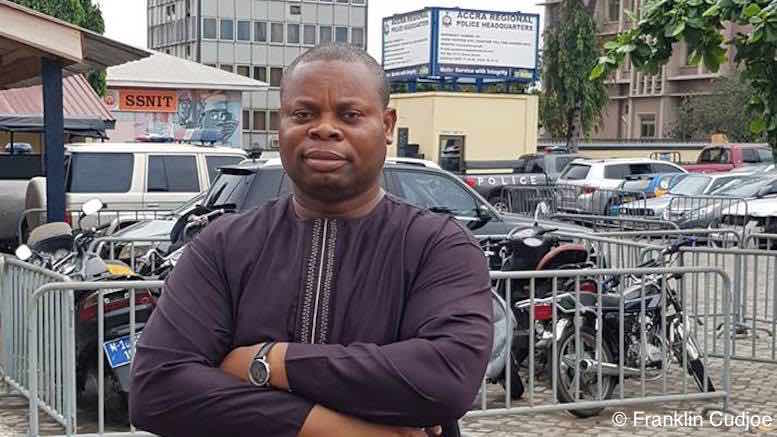 Even before we could get Hollywood to start drafting the script for a blockbuster movie about revenue assurance and government conspiracies, it seems we have to hold off because the plot becomes thicker every day.

Franklin Cudjoe, a prominent critic of a new national RA contract awarded by Ghana’s government, was warned to ‘watch his movements’ by a source in the Ministry of Interior, according to a post on Cudjoe’s Facebook page. Cudjoe then reported the matter to the police as a potential threat to his life. Apparently phrases like ‘let us silence [Cudjoe]’ had been used by people described as ‘security operatives’. Cudjoe appears unshaken by the threats; he used Facebook to post a defiant photograph of himself standing in front of the Accra Regional Police Headquarters (pictured above).

Cudjoe is the President of the IMANI Center for Policy and Education, a think tank based in Accra. IMANI is at the forefront of publicly questioning the government’s reasons for engaging a third national auditor of telecoms revenues after terminating contracts with two other firms who seemingly failed to do the job. The government signed a contract worth USD1,491,225 per month with KelniGVG, which is apparently a Ghanian-registered company with ties to Global Voice Group (GVG), a business that describes itself as specialists in revenue assurance and which was founded by former Haitian Prime Minister Laurent Lamothe. An IMANI press release had the following to say about the government’s choice of supplier:

Interestingly, GVG, or in its latest iteration GVG/Kelni has some history in Ghana and other countries, where it had been cited for unethical practices which led to the abrogation of some of their contracts. It is therefore very surprising that of all the contractors that would have been able to provide this service, we returned to the most controversial of contractors in an area that requires trust, a commitment to ethics and the handling of confidential information.

Responding to IMANI, a pressure group called the Progressive Nationalist Forum (PNF) accused IMANI of being a ‘front’ for telcos and singled out network operator MTN for criticism, saying that the CEO OF MTN Ghana, Ebenezer Asante, was conniving with IMANI ‘against the government policy’. A statement issued by the PNF said the following about the new deal with KelniGVG and the reasons IMANI was resisting it:

The total pre-financed hardware and software costs excluding operational and maintenance costs is valued at over $62 million with the responsibility to guarantee the upgrading and updating the CP Solution resting with KelniGVG. It is therefore palpable falsehood being peddled by the assigns of some of the telecoms companies who don’t want this implemented, that claim that the current system can be done for a paltry sum of 200,000 USD. We challenge them to strict prove (sic).

One wonders what purpose will be achieved by dragging in a mobile operator into the fray. Is this just a deflection tactic? Is it supposed to create the illusion that there are dark forces, supported by corporate giants behind the opposition for this dodgy deal, in the hope that the real dodgy folks will quietly slither away?

…any patriotic Ghanaian, or for that matter good cooperate [sic] citizen will be against an auditing system that seeks to bring transparency and enable government collect taxes due [to] it.

PNF seems to be of the view that the small matter of millions of dollars does not warrant such attention. In contrast, opponents to the deal amongst the Ghanian press observe that the RA auditing contract with KelniGVG will only generate a positive return if it leads tax authorities to collect more than the USD18mn which will be paid to the auditors each year. They have a point, because the value of the national RA audit has never been proven. On the contrary, the two auditors previously engaged in Ghana, Subah and Afriwave, were dismissed because they supposedly delivered nothing, as illustrated when current Communications Minister, Ursula Owusu Ekuful, stated:

The government of Ghana was also paying both entities essentially for no work done.

The patriotism card is played when governments are questioned in Africa and we should not be surprised that it is now being played. The notion that such accusations seek to create is that people who question the use of taxpayer funds are somehow driven by some ulterior motives and are some sort of enemies of progress.

A house of cards falls when one card is not aligned with the other. Now it seems the Communications Minister Ursula Owusu-Ekuful’s views (at least in the past) are not in line with the views that her deputy (George Andah) is now expressing. Mr Andah has been telling us that Subah is incapable of doing this RA project. Well, back in 2015, Ms Owusu-Ekuful categorically stated that Subah is in deed the company for this type of work! As this article observed:

Government has now introduced Kelni GVG as the company to do a similar job which Ursula Owusu said SUBAH could do in 2015 but could not do in 2018.

This comes at a good time. IMANI has asked Ghana MPs not to go easy on the Minister of Communications when she appears before the House.

There are so many plot twists in this story that we will need a script doctor to clean up some of its complexities. For example, Kwabena Donkor MP challenged the government for choosing a foreign firm to audit sensitive data without seeking parliamentary approval. Whilst KelniGVG appears to have been incorporated in Ghana in 1995, it does not seem to have been an active business until recently, and is very clearly basing its offering on the work GVG has done elsewhere. It would be sensible for Ghanians to ask what controls are in place to prevent the abuse of tremendous amounts of personal data that KelniGVG will accumulate by knowing every detail about the calls that people make and receive.

Another twist is that Ghana’s government may be found in contempt of court by progressing its deal with KelniGVG because Subah is resisting the termination of their auditing contract. Subah has obtained a court injunction challenging the cancellation of their contract.

And whilst we try to digest this incredible plot, we also need to decide who are the baddies and who are the goodies. The PNF think the CEO of MTN Ghana is working against the good of the state. Meanwhile, a recent hit piece in Ghana News Online implies that GVG founder Laurent Lamonthe is a scoundrel, rehashing old accusations that he engaged in bribery [update 31 May 10.00am UTC: all links to Ghana News Online have stopped working and now result in a peculiar error message instead]. Lamonthe has rejected claims he is guilty of corruption.

Yes, that just about sums up the story so far.

Wait, no, I am sure there will be more. But whilst you wait for the movie, see below for the TV show, where Ghanian program Newsfile covers a lengthy (but not very helpful) discussion of the issues surrounding the national RA audit by KelniGVG and its predecessors. The debate includes key player George Andah, Deputy Minister of Communications.