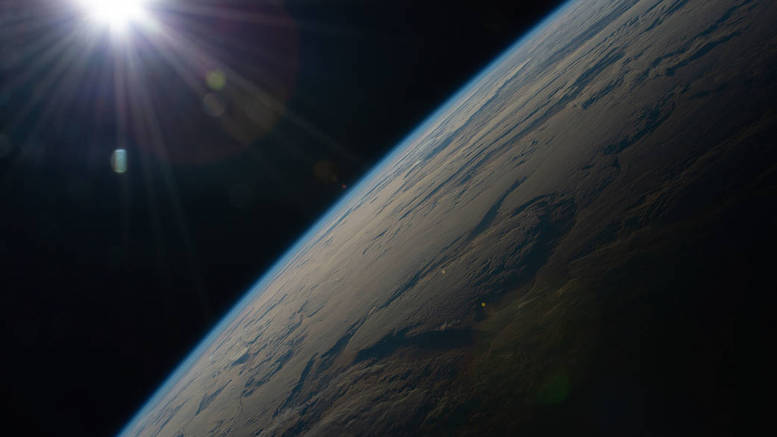 Lord Lindsay: Will [the telephone] not take the same position in [Britain] as it has already done in America?

William Preece: I fancy that the descriptions we get of its use in America are a little exaggerated; but there are conditions in America which necessitate the use of instruments of this kind more there than here. Here we have a superabundance of messengers, errand boys, and things of that kind. In America they are wanted, and one of the most striking things to an Englishman there is to see how the Americans have adopted in their houses call bells and telegraphs, and telephones, and all kinds of aids to their domestic arrangements, which have been forced upon them by necessity.

Elon Musk intends to change the way we receive broadband internet, and given the way Germany is now fretting about the impact of electric cars, Musk’s satellite broadband venture should cause concern for existing ISPs. Starlink, the satellite broadband division of SpaceX, is currently taking orders from early adopters. Their website says:

Starlink is now delivering initial beta service both domestically and internationally, and will continue expansion to near global coverage of the populated world in 2021.

The promised speeds are fast, but there are some caveats about the service too.

During beta, users can expect to see data speeds vary from 50Mb/s to 150Mb/s and latency from 20ms to 40ms in most locations over the next several months as we enhance the Starlink system. There will also be brief periods of no connectivity at all.

I went on the Starlink website to see if I really could order satellite broadband, and what the experience was like. This is the result, with the UK address blurred. 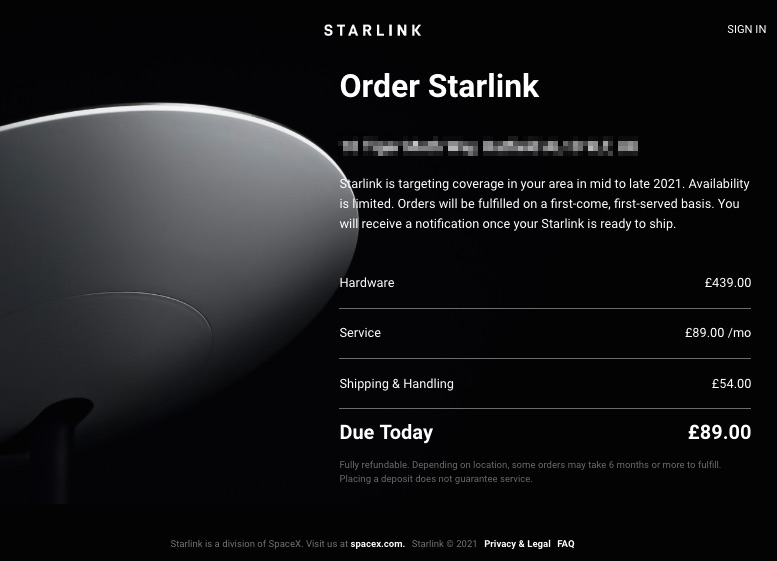 USD120 for monthly access plus almost USD700 in one-off fees is not cheap, but nor is it beyond imagination for wealthy rural customers whose homes and businesses will never be a priority for ISPs that rely on cables to convey the internet.

Starlink received a glowing endorsement from the Hoh Tribe, a native American tribe in a remote part of Washington state. They do not tweet often, but they shared this after being connected to Starlink in October 2020.

What a difference high-speed internet can make! Our children can participate in remote learning, residents can access #healthcare. We felt like we'd been paddling up-river with a spoon on this. @SpaceX Starlink made it happen overnight. Thanks @WAStateCommerce for introduction.

The first UK customer connected his service at the end of January. Philip Hall, who runs an IT business from his home in the scarcely populated county of Devon in South West England, gave a glowing review of Starlink to Insider.

Hall is now seeing average download speeds between 85 and 90 Mbps. “It is absolutely transformational,” he said. The connection has dropped out a couple of times but he said it’s not a problem for people living in rural communities.

Outages are likely to reduce as additional rocket launches put more satellites into space. The 19th Starlink launch occurred earlier this week, and the 20th launch is scheduled for Friday.

There is enormous potential for satellite broadband. The following 2017 map of broadband coverage from the FCC, the US regulator, gives a good indication of how much of the USA is not well served by existing ISPs. 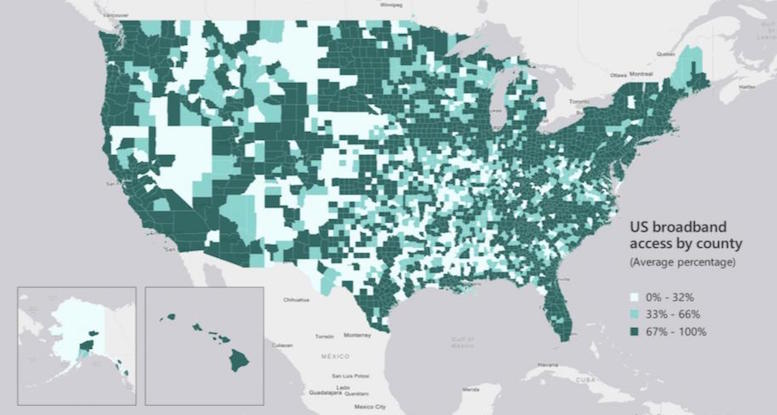 Satellites keep moving, so a vital service for customers in remote parts of one country could just as easily become essential to customers in any other country. If the dishes are made small and discrete there would also be an additional advantage for customers who want to work around the limits imposed by national firewalls and censorship.

Whilst the focus will be on serving rural customers to begin with, existing ISPs should consider how Musk was able to progressively scale up Tesla, his electric car manufacturing business. Tesla still sells fewer than 10 percent of the cars made by either Ford or General Motors. On the other hand, the stock market says Tesla is worth many times more than both of its American rivals put together. That shows what investors think of the future of those businesses.

Capital that feeds into Musk’s business is not being invested elsewhere, and laying cables is an expensive business. Starlink can serve the whole planet, meaning it scales in a way that no earth-bound ISP will ever emulate. If Musk can keep improving the economies of scale then he will become a viable rival to other ISPs even within an urban setting, especially as customers may not feel much loyalty to firms that routinely jack up prices whilst often receiving negative reviews for customer service.

Sometimes futuristic technology never becomes mainstream, and sometimes the conditions are right for sweeping change. ISPs that have been coasting on their past investment in infrastructure will need to raise their game, or they might find demand for their services shrivels like it did for English errand boys.

The impact and risks surrounding satellite broadband will be one of the topics discussed on today’s live streaming episode of RAG TV. You can enjoy the live experience today, Wednesday 17th February, beginning 8am Eastern, 1pm UK, 3pm South Africa and 6.30pm India. If you miss the opportunity to ask questions during the live show then the recording will be available soon after. Every episode of RAG TV can be watched online without needing to register; click here to learn more or to see the show.