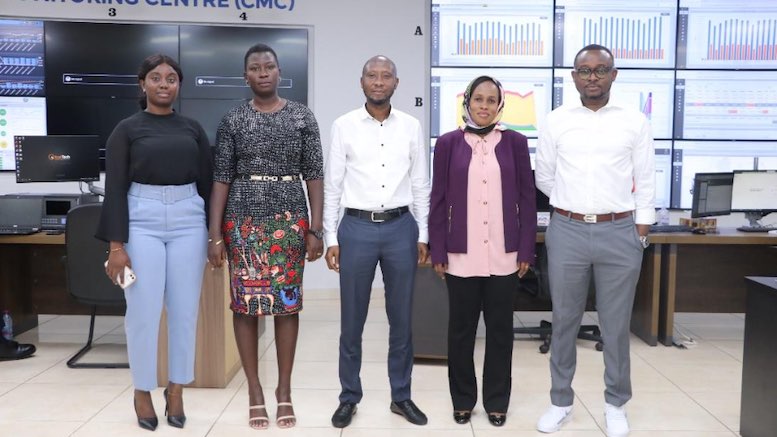 It was just a few years ago that Uganda spent a lavish amount on implementing a national system to monitor telecoms revenues with the promise this would reduce tax evasion and fraud. However, there are now strong indications that Uganda’s Intelligence Network Monitoring System (INMS) has failed to live up to the hype. These come from an unlikely source: an official press release from the comms regulator of Ghana. This stated that employees of the Uganda Communications Commission (UCC) made the 2,300-mile journey to Ghana for a one-day meeting with Ghana’s National Communications Authority (NCA), with the sole purpose of ‘benchmarking’ the national revenue assurance system used in Ghana.

The press release shows photographs of the meeting (reproduced above) and quotes Hamida Kibirige of the Ugandan delegation (pictured second right), describing her as the Chairperson of the Steering Committee, Telecom Intelligent Monitoring System and Data Monitoring System (TIMS and DMS) Project at the UCC.

Ms. Hamida Kibirige said they have heard good things about Ghana and found it the ideal destination to receive key lessons on fraud management, revenue assurance as well as other components of Ghana’s Common Platform. She expressed the hope that Ghana’s lessons will be essential in providing key nuggets for Uganda.

This may seem reasonable, until you wonder what Uganda has learned from its own fraud management and revenue assurance system. If Uganda’s system has stopped fraud and prevented tax evasion then there is nothing more it can be expected to do. But if more money could be generated from the same kind of monitoring activity, that can only mean Uganda’s monitoring system must be failing to some extent.

The notion of benchmarking systems makes perfect sense in most contexts, but not when benchmarking an audit system. Is the implication that an audit system may not always track 100 percent of the revenues it is supposed to be monitoring? If so, then how can this be determined by analyzing the performance of a different audit system that audits different revenues? Either Uganda spent millions of dollars on a system that is fit for purpose or else the system is flawed. The only way to quantify the flaws in an audit is by performing the same audit again, but without repeating the mistakes that were made first time.

The decision to implement a national RA system in Uganda was both expensive and controversial. In 2018 the UCC described their RA monitoring system as being in place and functional at the same time as ordinary Ugandans took to the streets to protest the government raising taxes on the use of mobile money and social media. ITWeb Africa reported the news pushed by the UCC at that time:

The Uganda Communications Commission (UCC) has installed a new Intelligence Network Monitoring System that tracks calls made on all networks and reveals the amount each operator is generating daily.

Other capabilities include fraud detection and billing verification.

The system was first introduced to monitor voice and data – primarily to verify the amounts being generated for tax revenue purposes.

However, the regulator has now confirmed it will use the infrastructure to monitor mobile money and the recently introduced social media tax.

Although the Ugandan RA system was reportedly working in 2018, the legal instrument for its regulation is dated November 2019. This regulation lists various purposes for the system, including fraud management, revenue assurance and verifying the ‘returns’ from Ugandan operators, which presumably refers to their tax returns. These purposes also include the one which caused most concern for opponents of the system who warned it would be used for government surveillance and oppression:

…(b) granting Government through its agencies to monitor communications use and fulfill any other security requirements directed by authorised persons;

The Ugandan press has published a small number of reports about Uganda’s INMS being used to support the collection of taxes from telcos, but none give examples of specific losses that were averted, or estimates of the gross benefits that have been added. The Ugandan government exerts tight control over the country’s media, so it comes as no surprise that nobody wanted to report the cost of implementing the INMS system. The only authoritative source of information comes from The Independent Uganda which conducted an in-depth investigation into the troubled history of procuring the INMS system, saying that it was originally decided to implement a national RA system in the early 2000’s but there were repeated delays because of concerns about links between senior members of government and the multiple companies being touted as potential suppliers. Though the final cost of the eventual system was never disclosed to the public, The Independent Uganda said the system “will cost the Ugandan taxpayer between $20-30 million (Shs. 66 billion—99 billion)”.

Ghana has a five-year contract with Global Voice Group (GVG) for the supply of its national RA system. This has also proven to be controversial, and not just because the system costs USD1,491,225 per month. An opponent of the contract reported death threats to the police. GVG repeatedly insisted it was a ‘local’ business to get the government contract, having set up a front company called KelniGVG, but then trained numerous NCA staff at GVG’s offices in Spain. The government has repeatedly defended the high price of the contract by asserting they have massively reduced tax evasion by telcos, but have refused to provide any detail to back this assertion, and there have been no tax prosecutions as a consequence of implementing GVG’s systems. On the contrary, it is more common for the government and GVG to defend themselves in court, most recently being told they had broken privacy laws by collecting data about mobile money transactions whilst pretending this was needed to reduce the spread of COVID-19.

Kibirige was an interesting choice to send on Uganda’s fact-finding mission. Numerous reports show she has plenty of connections within Uganda’s National Resistance Movement (NRM); the NRM has ruled Uganda since it successfully led a revolution against the previous government in 1986. Kibirige studied computer and electronic engineering in London but she has also been described as an investment consultant and she has seemingly cultivated business connections in a wide range of countries, including Japan and the USA. The press release from Nigeria’s NCA is the first time her name has been linked to Uganda’s national RA system, despite that system being relatively new.

There is nothing wrong with two government agencies comparing how their systems operate. However, there is a need for much greater vigilance surrounding government spending on telecoms revenue assurance systems which often seem to be unnecessarily expensive. Governments make vast promises about the financial benefits these systems will deliver, silencing concerns about their cost. However, there never seem to be any specific examples of these systems adding any value at all. Nobody in Uganda has denied that the government spent a lot of money on implementing a national RA system just a few years ago. Either it has delivered a positive return or it has not. So it seems strange that they now need to fly to Ghana to learn about the benefits delivered by a different national RA system, especially as they are speaking to a regulator that has not provided a single example of those benefits when challenged by Ghanaian taxpayers.