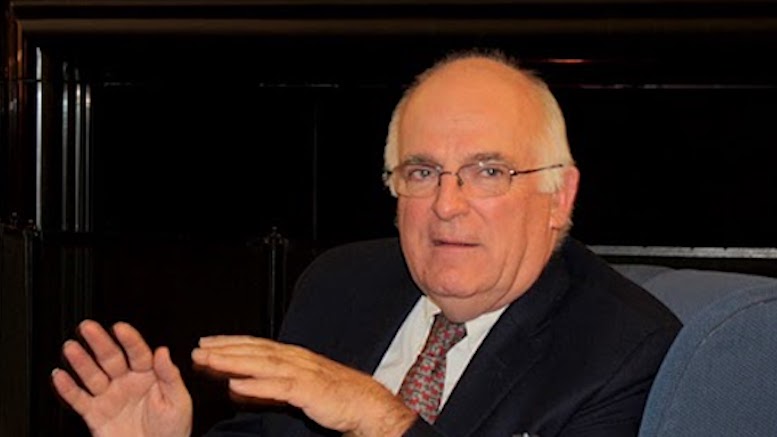 The former Head of the British Secret Intelligence Service, MI6, has written about his emails being hacked by the Russian state despite his taking sensible precautions to keep them secure. Richard Dearlove (pictured) served as the boss of MI6, a role informally known as ‘C’, from 1999 to 2004. But although he stepped down 18 years ago, he wrote in The Spectator how Russia still has an interest in monitoring his communications and using them to sow discord.

I had been using a secure Proton email to ward off hackers (Proton being a supposedly secure Swiss email system which is meant, users beware, to guarantee privacy) but it soon became clear that the emails had been swiped from the computer of a retired professor in deepest England who I had emailed in the past.

The stolen emails were then strung together and published online in an attempt to create this dramatic scenario of farcical proportions. Which is how we were accused of mounting a pro-Brexit coup against the UK government.

Expert examination, since confirmed by Google’s security teams, indicates that this was not some spare-bedroom hacker, but an operation so sophisticated that it could only have been done by a state actor.

Pro-Russian propagandists used the leaked emails to present Dearlove as a ringleader of a successful conspiracy to secretly take control of the UK, having effectively overthrown Britain’s elected government. As Dearlove pointed out, the creation of this story conflicts with common tropes about how Russia manipulates the news agenda of Western democracies. Dearlove was targeted as part of a Russian hacking attack on a loose, informal association of experts who presented arguments in favor of Brexit, the UK’s withdrawal from the European Union (EU). This contradicts simplistic interpretations of Russian motives that fixate on their supposed desire to break up the EU.

As readers will recall, the Remain media often accused Leavers of being manipulated by sinister dark forces. The most discreditable accusation made after the referendum was that Leave was being manipulated by the Russians, who supposedly wanted Brexit to happen. But now we have the Russians making considerable efforts to attack a small Brexit group and – at least objectively, as the Soviets used to say – trying to help the Rejoiner faction that is still unfortunately active.

Russian disinformation uses all levers to promote the maximum degree of conflict within countries that represent a threat to Putin’s objectives. This includes systematic infiltration of the media by openly courting Western journalists who are glad to be paid to produce febrile propaganda.

I found out in April that my emails had been compromised when an ‘investigative reporter’ sent me copies of my own emails asking for comment. The reporter’s online profile quickly showed that he was someone clearly comfortable in the warmth of Putin’s pocket.

Dearlove has a straightforward explanation of why he and his pro-Brexit associates were targeted by Russian spies and their lackies in the media.

How do we explain this? The answer is pretty obvious. Some of our Brexiteers have been quite outspoken in defending Ukraine and criticising Russian aggression.

Last week an attempt was made to hack my encrypted and secure email account. The circumstances of the attack suggest it is highly likely that a Russian state or state-backed unit carried out the attack. I have informed the police and the NCSC [National Cyber Security Centre].

Mason also said emails ‘purporting’ to be by him had been published on a left-wing website that appears to originate in the USA. This same website routinely publishes articles that condemn Ukrainian President Volodymyr Zelenskyy as overseeing a ‘campaign of assassination, kidnapping and torture’ supported by ‘neo-Nazi paramilitaries’ and ‘US-trained extremists’. The website also prominently repeats the conspiracy theory that Dearlove and other advocates of Brexit subverted democracy by changing the government to guarantee ‘a hard withdrawal from the EU’. Mason stated his emails had been targeted by hackers because he has repeatedly denounced the spread of pro-Russian, anti-Ukrainian disinformation.

My determination to expose and counter Russian disinformation campaigns, and attacks on our democracy, is well known. I will not be deterred from this.

A recent article for the New Statesman saw Mason advocating for a sophisticated approach to understanding and countering ‘pro-Kremlin’ disinformation.

We are in the infancy of counter-disinformation, and facing a Russian state that has operated disinfo strategies for decades. Getting it right will take time. Understanding that each and every one of us is on an information battlefield is the first step.

Is it a coincidence that a left-wing opponent of Russian disinformation campaigns had his emails targeted by hackers just a short while after pro-Brexit opponents of Russian aggression had their emails hacked, and that all these emails were used to fuel stories published by people who smear the Ukrainian government whilst arguing the Russian invasion is necessary to defend human rights? Would a serious, balanced and reasonable person find it hard to answer the last question? But social media is awash with people who seemingly do find it difficult to assess the trustworthiness of competing sources of information.

The evidence of Putin’s malign influence on public debate has accumulated over many years. However, some people do not want to be informed, nor do they want to take a balanced view of how Putin pursues his goals. They would rather fall into the trap of indulging their own vanity and pettiness by insisting upon a black-and-white division between those who are on the side of good, with everyone else being on the side of bad. They offer only a crude caricature that appeals to the prejudices of the audiences they seek to amass. In reality, Putin’s objectives do not neatly map to their preoccupations. They allow themselves to become the tools of Putin whilst convincing themselves that they are immune to his disinformation campaigns.

You will find Dearlove’s article for The Spectator here.