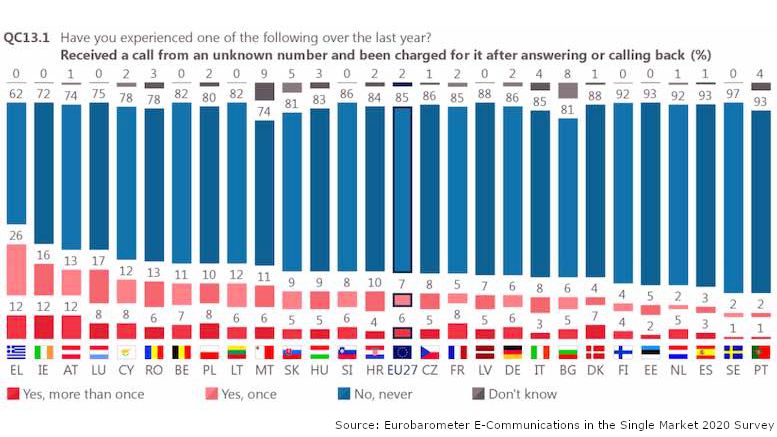 There were two questions relating to unsolicited calls and messages in the recently published Eurobarometer survey of electronic communications in the EU, which interviewed a total of 27,213 people from the EU’s 27 different countries. The headline findings were:

If they are accurate, these figures should cause alarm for telco executives. The majority of Europeans said they had not suffered additional charges as a consequence of receiving unsolicited calls and messages but the communications industry’s reputation cannot survive if 1 in 10 people are regularly being cheated out of money as a consequence of receiving unsolicited communications from unknown parties. We already know that customers in various countries have effectively been trained to ignore their phones if they do not recognize who is trying to contact them. The more that customers perceive phones as a tool exploited by spammers, the greater the harm that will be done to phone company revenues.

Pessimists should still be wary of overinterpreting these results. Surveys that ask people to remember events that happened during the past year are notoriously unreliable, although picking a large and representative sample whilst utilizing an interview format should have limited any bias in the data. It seems peculiar that well over 80 percent of those surveyed said they had suffered no excess charges as a consequence of unsolicited comms, but that approximately half of the people who said they fell victim also claimed to have suffered multiple times during the year.

The wording of the survey was too ambiguous to support much analysis of what went wrong. People were asked if they were charged for receiving unsolicited calls/messages or for responding to them. The fraud most likely to result in additional call charges would be wangiri, but somebody who realizes they were charged for returning a wangiri call would be unlikely to be fooled multiple times. Scams involving premium message services were thought to be in sharp decline, though it is possible that the survey respondents interpreted the word ‘charges’ to also apply to money conned out of them by fraudsters who spent most of 2020 sending fake messages about Amazon deliveries and the like. However, an additional charge could be incurred just if somebody received unsolicited communications whilst roaming, which might be annoying but is not a fraud. On the other hand, roaming declined sharply during 2020 because of the pandemic, begging further questions about the types of charges the survey interviewees thought they were charged. Either way, there is reason to be cautious when interpreting these results.

The need for care when interpreting survey findings was underlined (and undermined) by the writers of this survey report. They have already given bad information to the European Commission because their summary does not match the data they actually collected. The report writers wrongly used the word ‘fraudulent’ when explaining the answers given by interviewees, although the survey questions only asked whether the interviewee had been charged for unsolicited comms, with no mention of whether the unsolicited comms were fraudulent or otherwise. Just because a call or message is unsolicited does not mean it must be fraudulent.

The survey showed sharp discrepancies in results from country to country. The graph displayed above shows that Greeks said they were 13 times more likely to be charged for answering or responding to an unsolicited call compared to Swedes and Portuguese. 38 percent of Greeks said they had suffered such charges during the last year, followed by 28 percent of Irish, and 25 percent each for Austrians and Luxembourgers, compared to 13 percent for the EU average and just 3 percent for Swedes and Portuguese. There appears to be no satisfactory explanation for the discrepancy, especially as frauds like wangiri are both global in nature and independent of language. Countries that speak the same languages showed no correlation in results; Germans reported far fewer charges than Austrians, whilst the Dutch and French rates were far below those of Belgium. In contrast, there was a pronounced correlation between each country’s answers for voice calls and messages, with the Greeks, Irish, Austrians and Luxembourgers also topping the charts for charges for unsolicited messages, whilst the Swedes and Portuguese again complained least. This makes me question if the results really are indicative of fraud, because there is no good rationale for frauds using voice calls being closely correlated to frauds using text messages on a country-by-country level.

Even if we question the accuracy of the figures reported by the public, we should still be conscious of what they tell us about the reputation of comms providers. Telcos need to be mindful of crimes and other anti-social behavior that affects their customers. The inferences that have now been presented to the European Commission do not match the messages that telecoms fraud managers tell each other. Surveys of fraud managers usually neglect the cost of fraud to customers. Just because a fraud manager is not bothering to protect phone users or collect any data to measure the amount they lose does not mean that fraudulent traffic is a net positive generator of revenues. It is an indictment of some quarters of the fraud profession that they routinely ignored those frauds that target subscribers until they became so pervasive that they were featured in regular mainstream news reporting.

The Eurobarometer survey also includes other questions of more general interest to risk managers. For example, 15 percent of Europeans said they switched off their phones when visiting another European country in order to avoid being charged for its use. Perhaps the most troubling statistics relate to the poor appreciation of the fact that 112 can be used to call emergency services worldwide, or that people can use the same 112 number to send SMS messages to emergency services whilst in the EU, which is of importance to people who cannot easily speak or hear. Telco risk managers often talk about raising consumer awareness of various issues but there can be nothing more important than reminding people to dial 112 when faced with an emergency whilst abroad.

You can download the summary and detailed report of the Eurobarometer survey of e-communications within the European Union from this webpage.