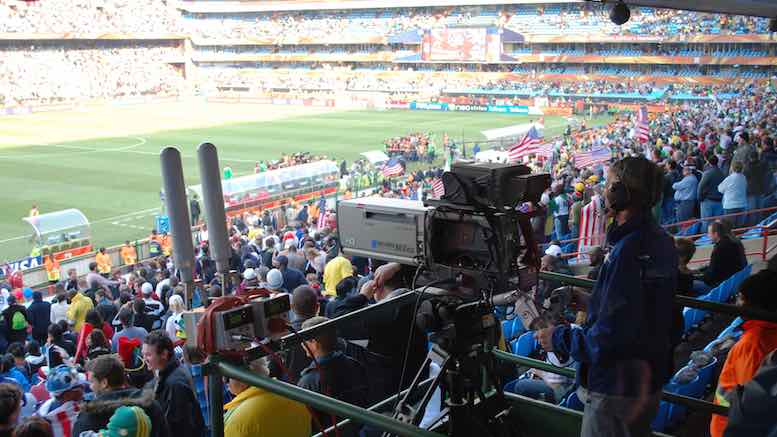 Regular readers may remember Commsrisk reported last year about beoutQ, the Saudi Arabian pirate TV provider that streams all the broadcasts from neighboring Qatar’s beIN Sports channels. The enterprising pirates launched beoutQ when the diplomatic rift between Saudi Arabia prompted the Saudis to block beIN Sports, which is a subsidiary operation of Al Jazeera, the state broadcaster of Qatar and a frequent critic of Saudi policy. The pirates have since expanded their business, offering intermittent service in the UAE as well. In the meantime, Saudi authorities have done nothing to stop beoutQ, although the piracy is blatant: they only change the content by superimposing their own beoutQ logo to cover the beIN logo on the original feed. World Cup organizers FIFA have previously complained about beoutQ’s piracy, but their latest announcement threatens to sue anyone who profits from it:

FIFA is aware that a pirate channel named BeoutQ has illegally distributed the opening matches of 2018 FIFA World Cup™ in the MENA region. FIFA takes infringements of its intellectual property very seriously and is exploring all options to stop the infringement of its rights, including in relation to action against legitimate organisations that are seen to support such illegal activities. We refute that BeoutQ has received any rights from FIFA to broadcast any FIFA event.

FIFA’s anger is understandable; Saudi Arabia’s national team qualified for the World Cup so this blatant piracy will cost them a lucrative source of revenue. However, the lawyers at FIFA are unlikely to find any effective recourse. At a time when the US government has resorted to imposing massive tariffs on Chinese imports as punishment for persistent intellectual property theft, nobody can force the Kingdom of Saudi Arabia to respect laws that are backed by international treaties but which require diligent enforcement at a national level. Put simply, too many Saudis love football for their rulers to risk interrupting the pirate broadcasts and so undermine support for the sanctions they have placed on Qatar.

With limited legal options, beIN has resorted to slapping warnings on its broadcasts aimed at anyone who ‘supports’ beoutQ.

It looks like @FIFAcom and @beINSPORTS are not happy about piracy. Interesting comment about pursuing “action against legitimate organisations seen to support such illegal activities”. #BeOutQ #IP #mediarights #TVrights #copyright pic.twitter.com/0iObYwFa56

Unfortunately, beIN’s trolling of the pirates has proven unpopular with some customers.

😡😡😡😡@beINSPORTS @beINMEDIAGROUP @beINmena we have seen your FIFA message – take it out now!!! #BEOUTQ @dutweets I am not paying to see this all the time …

Some also observed that trolling the pirates has the same effect as advertising.

BeIN keeping that scroller about BeOUTQ is the epitome of the Streisand effect.

The other problem with trolling is that it encourages a response, as shown by the propaganda circulated on social media by beoutQ.

Thereby, it has lost everything.. #beoutQ pic.twitter.com/rtb8CGZLuu

Rightsholders can complain all they like, but there is no such thing as intellectual property without laws that say people and corporations can own intangible rights. Rights that are given by a government can also be taken away. If the relevant government is not on their side, even FIFA’s enormous wealth and power will not enable them to put these pirates out of business. On the contrary, we might speculate that the Saudi government is sending a signal to FIFA about the consequences of awarding the 2022 World Cup to Qatar. FIFA recently awarded the 2026 World Cup to a partnership of three nations: Canada, Mexico and the USA. As such, talk about enforcing copyright laws may prove irrelevant, with beoutQ’s transmissions only coming to an end if FIFA finds a way to schedule some 2022 World Cup games in Saudi Arabia.