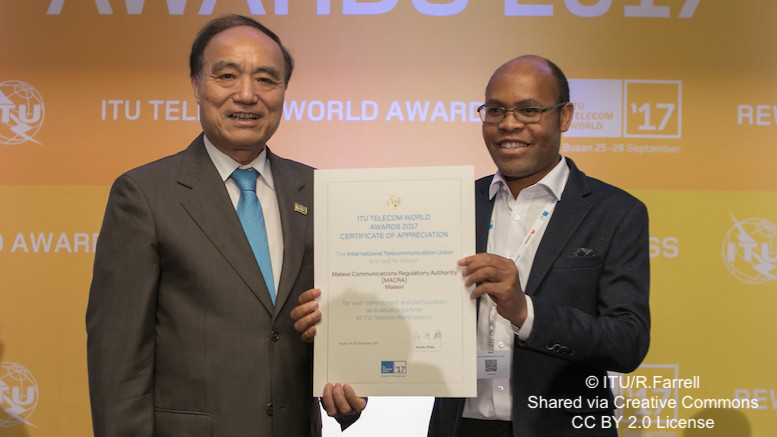 Malawi’s Anti-Corruption Bureau has obtained a warrant to arrest Godfrey Itaye, formerly the Director General of the Malawi Communications Regulatory Authority (MACRA), reports Nyasa Times. Itaye is accused of breaking the Corrupt Practices Act on several occasions whilst he was the boss of Malawi’s comms regulator. The charges include appointing an unqualified individual to serve as MACRA’s Revenue Assurance Manager.

Itaye is said to have repeatedly indulged in nepotism through his choice of appointments to MACRA. The official Ombudsman opened investigations into Itaye’s hiring practices in 2020 and subsequently reported in May 2021 that the way Itaye had been chosen for the job of Malawi’s top comms regulator was “a mockery and maladministration”.

In the photograph above, Itaye is seen to the right, receiving a certificate of appreciation from Houlin Zhao, Secretary General of the International Telecommunication Union.

Many countries make the mistake of treating the job of the comms regulator as a reward for political allegiance. This makes it difficult for outsiders to gauge if accusations about past corruption are a genuine attempt to clean up civil society or an act of revenge after a change in government. More attention should be paid to the ancient proverb that ‘a fish rots from the head’. If a corrupt process is followed when appointing a comms regulator, then more corruption is likely to follow. This is not only because the corrupt leader will appoint corrupt underlings, but also because telecoms is a business sector that provides ample opportunities for corrupt administrators to obtain bribes in exchange for decisions that favor one business over another.