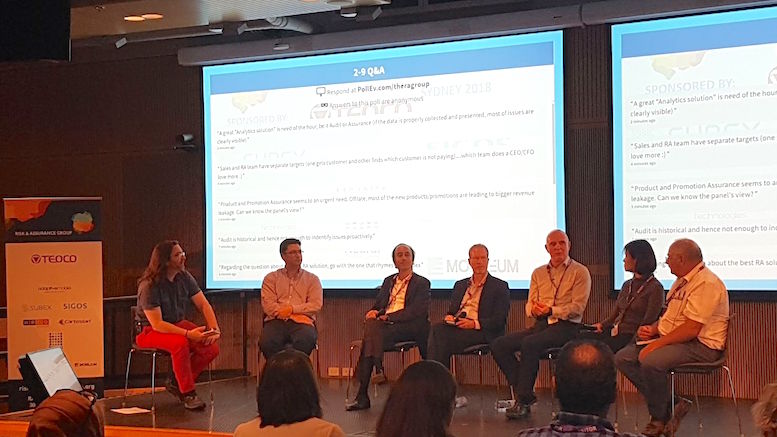 After running conferences in Bonn and Johannesburg, the latest test for the Risk & Assurance Group (RAG) was to see if its formula would also succeed in Sydney, with Optus hosting the first RAG event on Australian soil. Held on Tuesday and Wednesday last week, the conference welcomed guests from Indonesia, Malaysia, India, Singapore, Tonga, Fiji, USA, UK, France, Portugal, New Zealand and several Australian telcos. Energy levels remained high throughout both days, as proven by the 29 questions and comments that the audience submitted by smartphone during the closing Wise Heads panel. You can see a picture of the panel above, with some of the audience’s questions projected behind them.

So what were the hot topics that people talked about during the conference? Here are four themes that kept coming up throughout both days.

Host Anamitra Mukherjee, Associate Director of Revenue Assurance at Optus, opened the event with a keynote presentation that covered the various ways his team had expanded their remit beyond the traditional bounds of RA. This was reinforced on the second day by two members of his team, Sujith Dissanayake and Gihan Samarawickrama, who talked at length about the work they had done to assure revenues from handsets sold by Optus. Andy Jacobs of Subex followed that presentation by sharing with the audience his framework for device and handset assurance. There were connections to the keynote of Atul Jain, who explained how his analytics business, TEOCO, had focused on the accurate settlement of US carrier costs, a challenge which is comparable to revenue assurance.

Andy Jacobs later returned to participate in the final Wise Heads panel, where Andy listed his ‘bingo card’ of all the many kinds of assurance that had been mentioned over the course of the two days. There was widespread agreement that revenue assurance had been overtaken by a broader discipline, best described as business assurance, and participants like Jayne Hunter of Vodafone Hutchinson Australia explained why her job title is Head of Margin Assurance. Much of the work of revenue assurance now covers the management of all sorts of costs and assessing the quality of profits. One significant challenge for the future will be to continue to develop the right skills for RA people without limiting the ways they add value to the business.

Closing the Gray Area Between Assurance and Fraud Management

With so many assurances being tackled by multi-skilled teams, the line between business assurance and fraud management is being blurred. For example, Sujith Dissanayake and Gihan Samarawickrama of Optus openly explained how their handset assurance work has multiple facets, dealing not just with the accuracy of charges but also credit risk and the prevention of crime. Fraud expert Colin Yates was not alone in asserting the need for a broader risk mitigation strategy that addresses issues like OTT bypass instead of ignoring them because they do not violate any existing rules. On the contrary, Colin voiced his frustration with international bodies like the International Telecommunication Union (ITU) who are slow to adapt to persistent problems. Tony Poulos of WeDo talked about synthetic IDs and the use of social media data, highlighting how improved understanding of customers from their activity on networks like Facebook can be used to better identify intentional fraudsters and the legion of never-pay individuals who subscribe to services but who disappear when their bills arrive.

Although there seemed to be a desire to connect fraud management to business assurance, there were more differences of opinion about whether assurance techniques represented the future of internal audit. There was also a healthy debate about whether it would be best for all these functions to ultimately report to a Chief Risk Officer.

Julian Hebden, Chief Data Officer at the Victorian Centre for Data Insights, a branch of the government of the Australian state of Victoria, told the audience about the value that can be created by better exploring and understanding data. However, Julian also emphasized that it is inadequate to simply look for statistical patterns in data, but that good decision-making stemmed from employing individuals who truly understood the significance of the data they were looking at, as put into the context of the real-world activities described by that data. Julian felt that telecoms revenue assurance practitioners were unusually capable at crossing this divide, offering more than just data science. Mike Willett, Data and Analytics Partner at EYC3, agreed with Julian about the need to unlock the power of data and the potential for RA staff to go on a journey that would see them find value in more ways than the prevention of leakage.

The downsides of holding data were also raised by several participants, with frequent mentions of the dangers of lax data integrity and a lack of concern for privacy. Max Miller, formerly of Telstra, was especially vocal about these risks but clearly spoke on behalf of many in the room. Both Belinda Soh of Telenor and Glenn Hovey of Macquarie Telecom were in favor of taking an expansive view of security that protected the customer’s data as well as the business from external threats.

The attitude of workers will have a crucial influence on whether the organization is robust at dealing with criminality, fraud and other forms of corruption, as counter-corruption specialist Allan Yates explained in his presentation. Drawing on his own academic research, Allan illustrated why it is not enough for the company to adopt a policy that encourages the exposure of wrongdoing, but must also convince its staff that their report of wrongdoing will be appreciated and acted upon. If staff fear retaliation, the organization will lose one of the best mechanisms to identify criminal behavior within its ranks.

There are many ways that teams need to keep developing and valuing their staff, because the consensus was that neither automation nor outsourcing would justify a reduction of the headcount dedicated to risk and assurance work. Though they all advocated the use of test devices, Hakim Akayour of BT, Mandy Blackburn of Roscom and George Geronikos of SIGOS also talked about the human skill involved in defining the right test plans. Geoff Ibbett expressed his desire to see better training options for professionals, and Rita Handayani of Indosat explained the relationships between the teams that comprise the Indosat RA Department, with 40 of them covering the almost 100mn Indonesian customers they serve. But perhaps the best argument for more investment in staff came from Hakim Akayour, who was asked by the audience how BT’s RA function justified the engagement of 400 staff in total, with many of them working as contractors who seek to permanently raise the level of long-term performance rather than simply performing recurring tasks.

With many excellent presentations and highly-energized debates, it is impossible to capture the contributions of everybody who spoke, but please allow me to mention a few more names. Simeon Coney of AdaptiveMobile showed a great depth of security understanding in his keynote presentation. WeDo’s Miguel Lopes drew on his many years of experience to give a wry assessment of RAFM during the Wise Heads panel. Nishad Majeed of Mobileum provided crucial insights to the fraud prevention panel. And I would be remiss not to mention cybersecurity expert Alex Taverner, and Darren Rinaldi of Foxtel. Both Darren and Alex expressed robust opinions that were thought-provoking and entertaining. Some other conferences struggle to cultivate interaction, so it is always a pleasure to engage with forceful speakers who are not afraid to fight their corner, because they stimulate the audience and ensure we avoid the trap of politely agreeing with views that we do not honestly share. As such, they helped RAG to accomplish its mission, reproducing the success it has enjoyed elsewhere. The consequence is that there is already talk of RAG returning to Australia in 2019.

Given the tremendous support of Optus, from the greeting they gave as guests arrived, to the warm opening remarks of CFO Murray King, through to the care they showed during the final evening of socializing, there is no doubt they would also be superb hosts for any future RAG conference. And the Aussie spirit also seems to be aligned to that of RAG: honest, transparent, no-nonsense and good-natured. I hope and believe that RAG has made many new friends in Australia and the wider region, and we should look to return in future.