Every so often I like to check in with the websites of the various RA providers. Of course, when I do I know that I should not expect to find much actual information, since finding a fact on these sites is like finding a marble in a kiddie pool full of oatmeal. Instead, I visit simply to be entertained, and I’m rarely disappointed — especially when it comes to the press releases. Here’s a bit of the inside story on how a press release is put together as well as a dramatization of what may have happened between the lines:

RA MANAGER @ CSP: You guys are insane! Why would you want to change something that’s working?

RA MANAGER: Yeah! Well, I mean, it’s kinda weird looking, but we’ve already got all the features configured for it and stuff. Not only that, but we’ve also got all the team members trained and getting used to the screens just right. If you make a new release we’re going to have to figure that stuff out all over again. That could take weeks.

HEAD OF SALES: I see. But don’t you want the RA system to have more advanced features, and to be smarter and faster?

RA MANAGER: Not really, we just run the system as is. Reports are kinda OK I guess. We got used to it.

HEAD OF SALES: We need a totally new fresh look and feel!

R&D LEADER: [Dropping mouse in surprise] What? Why? What would make it fresher?

HEAD OF SALES: Selling more of them, that’s what! What do you think this is, a commune? We’re to behave as a publicly-traded company! You know what our valuation right now? Four cents a share! [Digs in pocket, grabs some pocket change and throws it at the R&D LEADER.] You know what I did just there? I just bought thirty-two percent of the company! Someone could buy us out right now for less than it costs to do a load of delicates at the laundromat! There are literally people standing in front of vending machines right now and asking themselves, “Hmm, I could buy this bag of peanut M&Ms, or I could own half of a world class leading RA vendor.” And you know what they’re doing? They’re buying the freaking candy!

R&D LEADER: All right, all right. But think for a minute. Even small changes are a major pain in the ass, and those changes cost money. What about a skin redesign?

HEAD OF SALES: You don’t think we’re doing that? We just hired an ex-Big 4 ex-telco industry expert. But there’s only so much we can do there. We’ve got one of the better names in the industry and there’s only so many modifications for the new release we can afford. Man, those competitors have it so easy!

R&D LEADER: Okay. What about a system name change, some thing with ‘cloud’ or ‘distributed’ in the title?

HEAD OF SALES: Wow, you’re a genius. You wanna be head of marketing? I think you’d be great at that. Idiot. Scalpel is already the perfect name! We’d be nuts to change it! It’s sharp and precise! Do you know how many names we went through before we picked it? Paring Knife — too culinary. X-Acto Knife — already trademarked. Samurai Sword — too ethnic. The Hedge Clipper — too landscapey.

R&D LEADER: All right, how about this? We move the menu from the left side of the screen to the right and we call it the “Righty.”

HEAD OF SALES: Where the hell are you gonna put the favorites?

HEAD OF SALES: Do you know anything about RA systems at all? 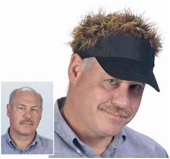 R&D LEADER: No! I told you that when you hired me from Innovate Novelties Corporation.

HEAD OF SALES: Yeah, well call me crazy, but I thought the guy who invented the vizor rug might know a thing or two about innovation.

HEAD OF SALES: I know you are. [Putting his arm around R&D LEADER.] Hey, look, I know I’m being tough on you. I’m under a lot of pressure is all. I’ve got this RA vendor breathing down my neck like a teenager on a date. I just wanna make a hit out of this thing, you know?

HEAD OF SALES: Great. I knew I could count on you. Now let’s have a new release!

HEAD OF SALES: So here it is, the new release.

RA MANAGER: Cool. Menu options are a little cheesy. Why is the menu on the right? What are we supposed to do about the favorites? Where are my reports and analytics?

HEAD OF SALES: Just try the new fresh features on the right.

HEAD OF SALES: No problems!

For an example, I was very happy to read that Wedo has a new patent on Distributed Risk Management Solution, it really makes my day. Would they like to receive unsolicited advice? Of course they would. Well, my advice to them this morning is to search for SLP Infoware patents which are owned by Gemplus which are owned by Gemalto. Gemplus had over 2,400 patents that were issued about 10 years ago covering device resident CLTV analytics, Retention, Churn, Risk management et al all at the device level.

What would be your association when I ask about your user experience with Windows 95? Or even better with Windows 3.11? Mine would be plain and simple bordom. It done the job, we had a myrad of apps on our desktop and we struggled to find our way to do a simple task. In a way, Windows 7, while far from being perfect, is more advanced, many apps are web based, weather, clocks, email even the office suite. Yet our mobile phones remind me Windows 3.11. Telcos are like the PC motherboard, it is vital but no one cares about it.

Why this long intro anyway? Well, my point is that all the RA vendors had beaten the the term business assurance to death, but what business they assure? IT firms should innovate. See Google. See Waze. See Coke!

Business progresses through innovation, not regression. Take for example company like Coca-Cola which is in a B2B business and concerned with streamlined ops and cost cutting and was top innovator comes with mobile solutions in Brazil. See the cooperation between Coca Cola and Ogilvy.

As a result Coke Lands First Appearance on Fast Company Ranking. In case you had missed the connection – Brazil is Wedo’s center’s of gravity and ops.

IMO small and medium players have to innovate to remain relevant. When was the last time an RA vendor demonstrated innovation? Any RA vendor? Business assurance leaders do little to stand to the true meaning of their title. What business do they intend to assure?

Telcos and consiqently RA vendors should know pretty well what apps I use often, how I use them – and then what? Had the RA vendors thought about providing value with this insight, can this be converted to new revenue streams or customer value? With all the insight can they improve the user experience? I hadn’t seen evidence yet, so can they? At least they can try.

Away from the office, David is a keen photographer. Visit davidleshem.com to sample his photographic work.