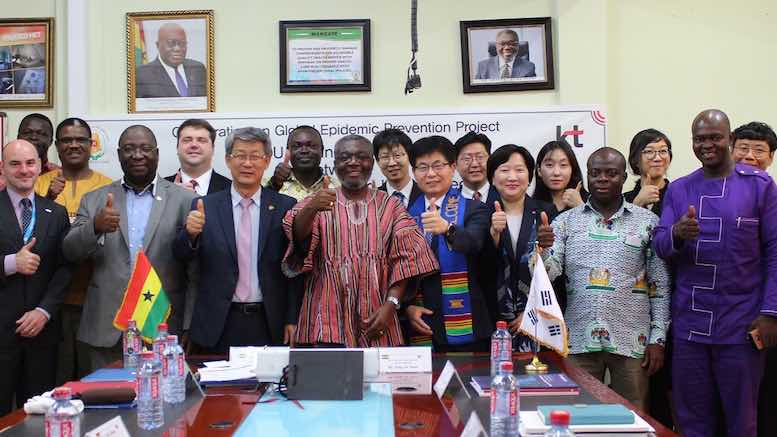 KT Corporation, the largest telco in South Korea, has announced it will help the government of Ghana to fight the spread of infectious diseases by using location data from mobile phones.

KT’s disease prevention system analyzes location-based information including roaming data that it collects, uses the data to guide its customers on preventing epidemics, and builds a monitoring system that helps health authorities assess infection risk at the initial stage of an outbreak.

KT started work on the system in 2016 with the Ministry of Science and ICT and the National Information Society Agency to demonstrate how Big Data can be used in disease control. The project came a year after MERS (Middle East Respiratory Syndrome) hit Korea. Now it is regarded as a showcase of collaboration between the public and private sectors.

The announcement was made following a signing ceremony (pictured above) that included officials from KT, the Ghana Health Service, the US Centers for Disease Control and Prevention (CDC), and the World Health Organization (WHO).

KT would also like to see its location analytics technology adopted by other countries.

Based on the project’s success, KT is seeking collaboration with foreign governments and international organizations on the use of Big Data and information technology in preventing the spread of infectious diseases. To that end, the Korean company suggested a Global Epidemic Prevention Platform at the World Economic Forum’s annual conference in January this year.

As well as helping Africans, the Koreans also want to work with Asians to fully realize the potential of their system.

As a global leader in ICT, KT is also calling on Asian countries to participate in its project. Among the target countries is the Lao People’s Democratic Republic (PDR). KT will seek to launch an epidemic prevention project with both the Lao Ministry of Health and the Korea Foundation for International Healthcare (KOFIH), a public affiliate of South Korea’s Ministry of Health and Welfare.

This news follows another recent announcement about using telecoms CDR data to track the movements of the population following an outbreak of disease or natural disaster. Flowminder, a nonprofit organization, has released the first version of their free open source FlowKit toolkit in the hope that telcos will adopt it and be better prepared to assist medical and aid agencies during times of crisis.