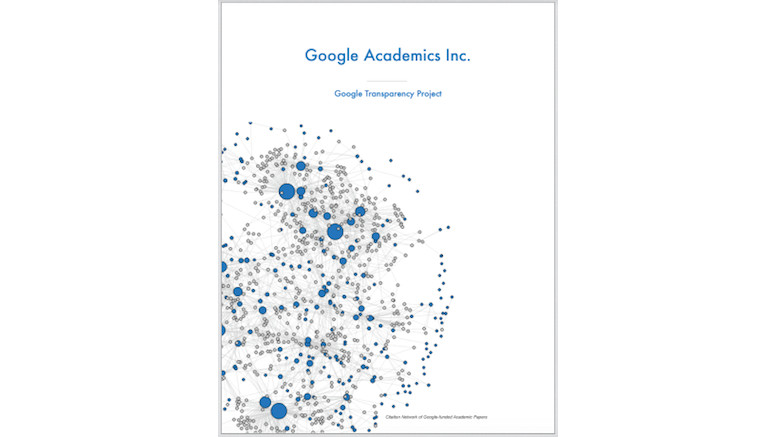 A lot of worldwide news attention has been paid to a new report by the Campaign for Accountability which criticizes Google for using funding to influence academics. As Wired succinctly put it in their headline:

Looks like Google bought favorable research to lobby with

Google uses its immense wealth and power to attempt to influence policy makers at every level. At a minimum, regulators should be aware that the allegedly independent legal and academic work on which they rely has been brought to them by Google.

The writers of the report compare Google’s tactics to those used by tobacco and oil companies. In each case it appears as though seemingly independent academics are being induced to deliver research findings which align with the business interests of their sponsors. Their report concludes that 65 percent of the papers backed by Google’s money fail to mention that Google was a source of funding.

The concern for telcos is that Google is actively influencing the way they are regulated. Net neutrality features heavily amongst the research topics being sponsored by Google. However you dress it up, net neutrality is currently a debate about government control of telcos. Net neutrality translates into lower costs for Google. The titles of some of the papers make it clear where Google’s interests lie:

The Campaign for Accountability’s research comes as no surprise to me; I previously pointed out how Google’s name repeatedly crops up when trying to determine who finances ‘independent’ net neutrality advocacy groups.

As you might expect, Google hit back hard against the criticism. Their response stated:

We run many research programs that provide funding and resources to the external research community. This helps public and private institutions pursue research on important topics in computer science, technology, and a wide range of public policy and legal issues.

They make it sound like Google is a big charity, giving money away because things are ‘important’ and not because Google has any interest in influencing policy decisions made by government. This is the same Google which successfully exerts a lot more influence over the US government than the European Union, as illustrated by the enormous fines which the EU keep levying on Google for anti-competitive behavior.

Google is winning a publicity battle, and paying for academic research is just one front. In contrast, American telcos are losing badly. This is made obvious when the telcos try to do the same as Google, and influence their government to adopt favorable policies. Consider the following headlines:

In contrast, Google unashamedly justifies their spending on academic research by stating:

Our support for the principles underlying an open internet is shared by many academics and institutions who have a long history of undertaking research on these topics—across important areas like copyright, patents, and free expression. We provide support to help them undertake further research, and to raise awareness of their ideas.

Who coined the phrase ‘open internet’? It gets thrown around during these debates, especially by big businesses who enjoy enhanced profits as a consequence of ‘openness’. Everybody wants an internet that is open, right? But in this debate, ‘open’ also means ‘free for Google, paid for by end consumers’. If openness was described that way, it might not seem such an obvious boon for the little people that Google claims to be defending. That is why many dogmatic supporters of net neutrality, such as the Electronic Freedom Foundation, have adopted the position that it is bad for consumers to receive free internet services, as opposed to services charged for at a ‘neutral’ price. Their absurd argument is that free services will never be fair or open!!!

Telecoms Engineer: Minister, minister, I have to warn you about a serious threat to our way of life!

Telecoms Minister: What danger is that?

Minister: Network neutrality sounds totally uninteresting. Why are you telling me this?

Engineer: Isn’t it obvious? If we run our networks according to this principle, then we won’t be able to censor what is on the internet any more.

Minister: Get out of my office, you ****ing idiot! When I want something censored, I just call my good friends at Google and they do what I tell them.

Somebody has to pay for internet infrastructure, and so far Google is doing a great job of ensuring it is not them. They have so successfully manipulated the public mood in the USA that outspoken TV comedians like John Oliver routinely rely on hostility to telcos as a way to boost their own popularity. Oliver loves phrases like the ‘open internet’ and rails against the ‘f**kery’ of ISPs. He positions himself as a champion of ordinary people but the truth is that Oliver is so far up Google’s ass that if he lit a cigarette the smoke would come out of Sergey Brin’s mouth.

I would apologize for the crude language, but this is the language being used by powerful forces who want to hurt telcos. It seems to me that many in the telecoms industry need a wake-up call. Big internet companies like Google are ruthlessly pounding telcos, forcing costs to be borne by telcos, just so the internet companies do not have to pay a fair share for the infrastructure they rely upon. Meanwhile, these enormously wealthy and influential businesses co-opt academics, politicians, and even comedians to join a feel-good coalition that will say and do anything to demonize telcos. The best trick played by Google is to create so many layers between them and their desired results that opposing net neutrality seems to be just how everybody feels, based on some ‘evidence’ that nobody is very clear about, but which they are convinced is reliable because it ultimately comes from an academic source.

Step back and think about your telco colleagues for a moment. Do we really believe all the decent people get recruited by internet companies, whilst all the evil people get recruited by telcos? Do we actually think that Google hires executives because they love an open internet whilst telcos hire wretched executives motivated by greed? Only a child – or a comedian – would be so simplistic. The people who work for Google are no different to the people who work for telcos. The problem that telcos have is their public relations outreach is a dismal failure whilst Google’s is a tremendous success. Google is doing to telcos what telcos would like to do to Google – shifting costs so somebody else carries the burden. That ultimately means telco customers carry the burden – making telcos even more unpopular, and reducing the chances of there being enough telcos to compete effectively in a free market, which further encourages government intervention.

Google is succeeding whilst the telcos are failing, but many lightweight telecoms professionals talk about net neutrality with the same lack of understanding as exhibited by comedians like John Oliver. And that shows how badly the telcos have failed – even their own employees think net neutrality has something to do with freedom. Net neutrality is about money. It used to be about the order of processing packets, but now it is about who pays for what. Google spends their money wisely, including the money they spend on academia. Meanwhile, telcos will be left paying the bill.

The Campaign for Accountability’s report about Google seeking to influence policy via academic research can be read here.