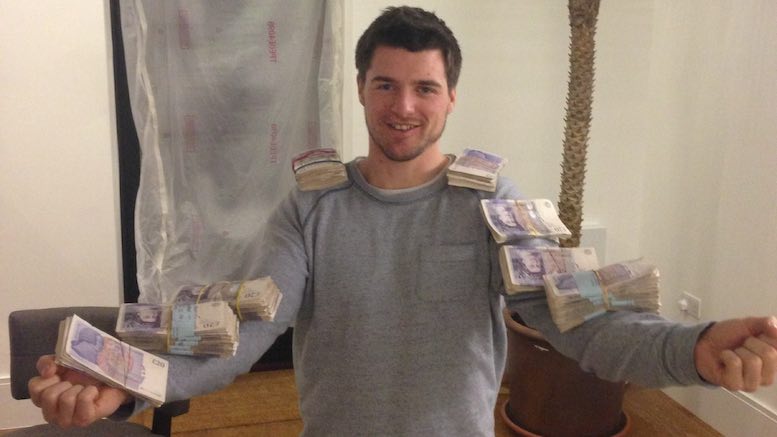 A GBP2.1mn (USD2.8mn) fraud might sound pretty big. You might imagine the gangsters who ran the fraud to be led by a criminal mastermind. But then you look at the photo of the ringleader, Jonathan Boorman, shown above, and think again. Boorman is now serving a prison sentence of 6 years and 4 months, but the Daily Mail reports he previously drove a Lamborghini sports car and rented an apartment which cost GBP12,000 (USD16,000) per month. He also posed for photographs with bundles of 20-pound notes on both arms. Details like those probably did not help Boorman’s defense in court. So rather than concluding that criminals are clever, we must conclude that fraudsters only enjoy success because other people are even more stupid than the criminals are.

Boorman’s pawns were clearly stupid, even though most of them were university students. The version of the story put out by the police does not draw attention to the stupidity of the credit mules that Boorman’s gang recruited, but I will. Imagine somebody offers you GBP50 (USD65) and all you have to do is to let them use your real name and address to start a new phone contract, and then to forward them the really expensive handsets that have been ordered on your behalf. What could go possibly go wrong? More than three hundred students have learned the answer to that question from bitter personal experience. Their credit ratings have been ruined. That serves them right; their judgement is so poor they should not be trusted with credit.

But looking beyond the stupidity and greed of the students, you then have to return to the stupidity and greed of the fraudsters. The credit mules could obviously identify the fraudsters who paid them. The mules posted the phones they received to the office used by the criminals, so they knew their address. Not all the phone contracts were cancelled, so it was only a matter of time before some of those mules would have to deal with the big bills racked up by the fraudsters and their accomplices at a text marketing spam-scam agency. Instead of spending money on fast cars they needed to prepare a getaway to a foreign country in advance of their day of reckoning. The fraudsters did not do that, and they pursued their scheme until they were caught. As a consequence, they have all been relocated to prison cells.

Before we laugh too loudly at the deficits of the criminals and of gullible members of the pubic, we should question how smart the British legal system is. This fraud began in 2013, and the police raided the fraudsters in 2014. It took another three years before the criminals were convicted. Every member of the gang received a prison sentence of not less than two years. If people like these are such a danger to society that they need to be locked up for two years at least, why does it take more than three years to reach that decision?

And how smart are we, to be taking pride in this conviction? A bunch of bozos enticed some other bozos into a bozo scheme which, years later, resulted in them being sentenced to prison for a crime worth GBP2,149,344. That is a precise number for a deception that depended on ordering expensive new handsets from telcos, only to return cheap counterfeit handsets in their place. It took years of effort to put the criminals away, but this crime represents a small fraction of the fraud that telcos endure each year. The UK telco industry generates revenues of roughly GBP40bn each year. If industry estimates are to be believed, Boorman’s GBP2mn caper is worth less than half a percent of the value of fraud endured by British telcos. Meanwhile, internal accounting frauds at telcos like BT can wipe hundreds of millions off the company’s book value, and billions off its share price. So for all the hard work that went into identifying and prosecuting Boorman and his gang, and into warning members of the public who are easily duped, much more money would be saved by countering fraud elsewhere.