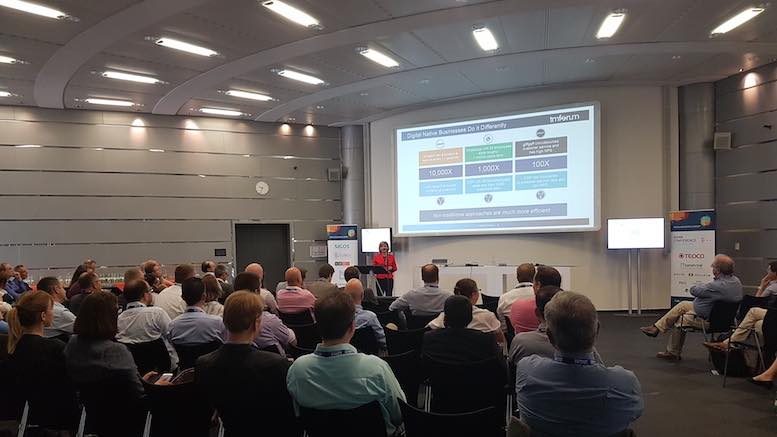 In a little under three months the Risk & Assurance Group (RAG) will run back-to-back conferences in Europe and North America, and the first release of the draft agendas prove the events will draw some of the best-known exponents of telecoms revenue assurance, fraud management, analytics, security and risk.

RAG Bonn, to be hosted at Deutsche Telekom’s head office on June 11th and 12th, will draw star names from around Europe. The newly-published agenda includes:

Other well-liked experts returning by popular demand include Tony Sani, Adam Falus, Sha’ad Hossenbaccus, and the most travelled man in telecoms RAFM, Nixon Wampamba. Gina Pesheva (pictured speaking when Deutsche Telekom last hosted RAG, in 2017) will give the keynote presentation on behalf of the host telco.

Meanwhile, RAG Toronto, to be held at the impressive TELUS Harbour office building on June 19th and 20th, will be graced by some of the pioneers of telecoms risk and assurance work in North America. Though not yet complete, the first draft of the agenda for RAG Toronto features:

Also on the Toronto agenda is Grant Merrill, Director of Revenue Assurance at CenturyLink, Delia Guglielmi, Senior Manager for Fraud Control and Detection at Bell Canada, and Mahesh Thakkar, Director of Revenue Assurance & Fraud Management at Freedom Mobile. Amyn Sarif, TELUS Senior Program Manager for CyberSecurity DevOps, will give a presentation about how to evaluate the return on investment in cybersecurity, and Jacqui Biggart, Manager of Technology Security at TELUS, will serve as the event host.

With so many great speakers from telcos it is little surprise that the agendas also indicate strong backing from multinational vendors including TEOCO, WeDo, iconectiv, SIGOS, Neural Technologies and Subex. An announcement on the full roster of sponsors is expected soon, pending the closure of the final few annual sponsorship deals.

Exciting speakers come to RAG conferences because they want to connect with large, engaged audiences. Leading telcos like TELUS and Deutsche Telekom are willing to host the conferences because it means their teams enjoy a world-class event without needing to leave the office. Top vendors cover all the costs because they want to meet and listen to the many telco professionals who attend for free. Telco employees wanting free registration for RAG Bonn and RAG Toronto can obtain it by simply going online and providing their details. So with two great venues for a Summer trip in either Europe or North America, a superb line-up of expert contributors that will keep growing as more speakers are confirmed, and no admission fee for telco staff, why not secure your place today?