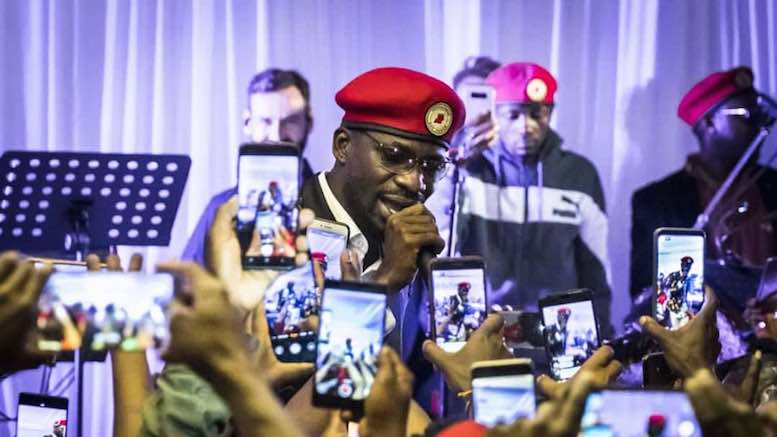 An investigation by the Wall Street Journal has found Huawei staff interfering in the politics of two African democracies by conducting electronic surveillance of political activists. Huawei officials responded to the article by saying they have “never been engaged in ‘hacking’ activities.”

The WSJ investigation found that Huawei engineers deployed Israeli-made spyware in order to infiltrate a WhatsApp chat group used by Robert Kyagulanyi (pictured), a politician and popular musician who uses the stage name Bobi Wine. Ugandan authorities used this intelligence to devise ways to obstruct protests and secure the arrest of Kyagulanyi and dozens of his supporters. Ugandan government spokesman Ofowno Opondo spoke to the BBC to deny the allegations of government surveillance, although his choice of words was comical.

That is false. And in any case, we don’t need Huawei’s help to do so.

Last year Commsrisk reported on protests by Kyagulanyi and his supporters against new mobile money and social media taxes. Museveni later made an embarrassing u-turn by halving the tax on mobile money. The President excused the sudden change with the improbable claim that the original legislation stated the wrong tax rate because of an ‘error’ made during drafting.

Kyagulanyi recently announced he will stand against Museveni in the 2021 Presidential elections, only to find himself charged with the crime of ‘annoying’ Museveni soon afterwards. Kyagulanyi has been a member of parliament for two years, whilst Museveni has been head of the Ugandan government since 1986 and has already said he will seek a sixth Presidential term in the next election.

In Zambia, Huawei staff assisted the government to obtain access to phones and Facebook pages used by bloggers for a news website opposed to President Edgar Lungu. The bloggers were arrested after Huawei employees passed on information about their location to the police. Zambia’s ruling party sought to justify the arrests by asserting it is a crime to use telecoms networks to spread fake news, which begs the question of who impartially decides what opposition politicians are allowed to say.

The WSJ article on Govt spying on political opponents is malicious, we refute it with the contempt it deserves. Zambia is a country of laws with Constitution guarantees citizens right to privacy.
The fight against cyber crime, like world over, is to guard against criminals.

Anyone vaguely familiar with Huawei’s spin will recognize the two separate arguments they deployed to defend themselves from criticism. Firstly, they claimed Huawei lacks the technological capability to do things like this. If one of the world’s three major telecoms network manufacturers does not understand how to intercept or analyze telecoms traffic then it is a wonder they have the competence to build networks in the first place. Then Huawei argued that executives based in China are not responsible for acts they neither approved nor knew about. Huawei has over 300,000 staff worldwide, so this argument is more persuasive. But this also illustrates the folly of believing there is no risk in using Huawei networks, because the Chinese manufacturer is making a habit of saying it cannot be blamed when its employees are caught stealing secrets.

You can read the (paywall protected) WSJ article here.