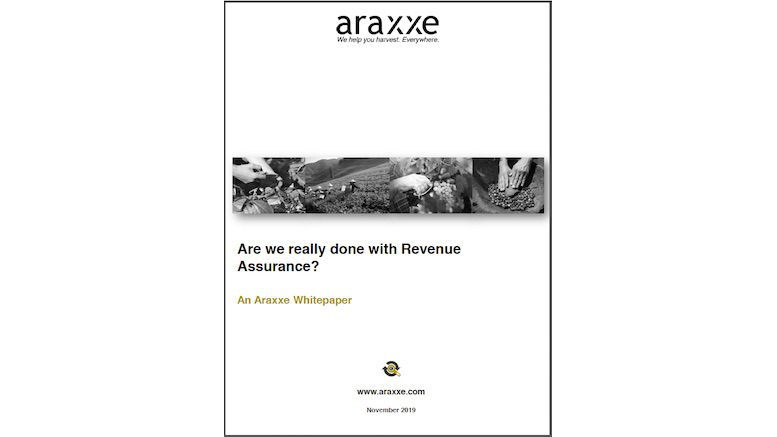 A new white paper by Araxxe reveals that their testing found 3,665 separate instances of incorrect charging on behalf of 61 telco customers during the last three years. That gives an average of 20 mistakes per telco per year!

Araxxe’s paper is entitled “Are We Really Done with Revenue Assurance?” and their unsurprising conclusion is that we have a lot more revenue assurance still to do. They following findings were determined by using test calls to independently compare the services that telcos were actually providing to the amounts they were charging.

Of the 3,665 errors found by Araxxe, 65 percent resulted in the undercharging of customers, whilst the remaining 35 percent caused customers to be overcharged. This is a very important statistic because it is rare to find any business presenting objective data on the ratio between overcharges and undercharges. Some telecoms professionals seek to dismiss overcharging as a negligible risk, whilst journalists naturally focus on the scale and regularity of customer complaints about being overcharged. Araxxe’s statistic is credible and important because it does not underplay the significance of overcharging whilst also providing a useful indicator of the extent of revenue leakages that telcos can be slow to identify. If we think about the number of upheld customer complaints about overcharging, consider the mayhem that would hit call centers if customers were as likely to complain about being undercharged!

Mistakes with Pricing Cause 34% of All Charging Errors

The incorrect implementation of tariff plans was to blame of 34 percent of the charging errors found by Araxxe’s tests, making it the leading cause of inaccurate charging. The next most common problem was the loss of chargeable records, which caused 31 percent of errors.

Applying common sense helps us to identify the relationship between these types of errors and the 2:1 ratio between undercharging and overcharging errors. Two-thirds of all charging errors resulted from these two kinds of failure, but each failure impacts charging differently. From a logical perspective, the mis-application of a tariff is equally likely to cause an undercharge or an overcharge, whilst missing records only ever result in undercharges. This helps to explain why undercharging is more likely than overcharging, but also why RA teams should tackle overcharging as part of an integrated strategy towards addressing all kinds of errors.

Araxxe’s test results found that 68 percent of charging errors occurred when the customer was roaming on another network, and only 32 percent of errors happened to customers on their home network. Test calls are often used to assure services provided whilst roaming, so this discrepancy may be influenced by an unrepresentative skew in Araxxe’s sample. However, the size of the difference suggests that the greater complexity involved in charging customers for roaming does lead to a higher propensity for error.

Looking Forward and Looking Back

The white paper is worth a read by anyone interested in the accuracy of charging for communications services. Some of the statistics suggest telcos will become more accurate without trying. For example, there were many more charging errors for voice services than for SMS or data services, and we know that voice revenues are in decline. On the other hand, Araxxe also found some mistakes that should worry managers responsible for newer business models.

For several years I have been warning about the risk that telcos will suffer serious losses if they do not correctly charge for video content sold on a pay-per-view basis, and Araxxe’s testing found an instance where one video-on-demand provider lost EUR500,000 (USD550,000) because a mediation error caused sales of some particular movies to be filtered out instead of being invoiced to customers. This basic mistake, which affected bills over a six-month period, highlights the reasons why assurance teams should keep applying the same fundamental principles to new revenue streams. Doing this will help RA teams to avoid the obsolescence trap that comes from narrowly defining the work of an RA function as executing a specific series of controls that only apply to particular network technologies and traditional revenue streams.

‘Are We Done with Revenue Assurance?’ can be downloaded from Araxxe’s website after registering your details here.