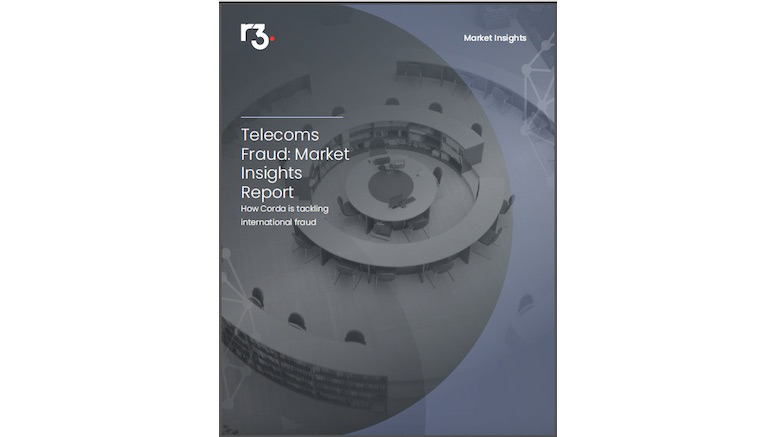 Life is pretty simple: You do some stuff. Most fails. Some works. You do more of what works. If it works big, others quickly copy it. Then you do something else. The trick is in the doing something else. You must take pot shots at today’s star before you are mimicked.

How can you tell if an idea is good? Wait to see if other people copy it. The RAG Wangiri Blockchain is one such idea.

There are some telcos who say this is a bad idea, and they are not going to help. But those are the telcos which say the same thing about every anti-fraud collaboration. On the other hand, over 90 organizations have requested and gained access to the RAG Wangiri Blockchain, including the following:

Infosys, a multinational IT consulting and services business that generates around USD12bn in revenues each year, obtained access to the RAG Wangiri Blockchain in July 2020. You can imagine my reaction when I learned they recently announced the development of their own blockchain for the sharing of wangiri intelligence. In the spirit of sharing, here is a diagram created by Arka Roychowdhury, Principal Consultant in the Blockchain Practice of Infosys. 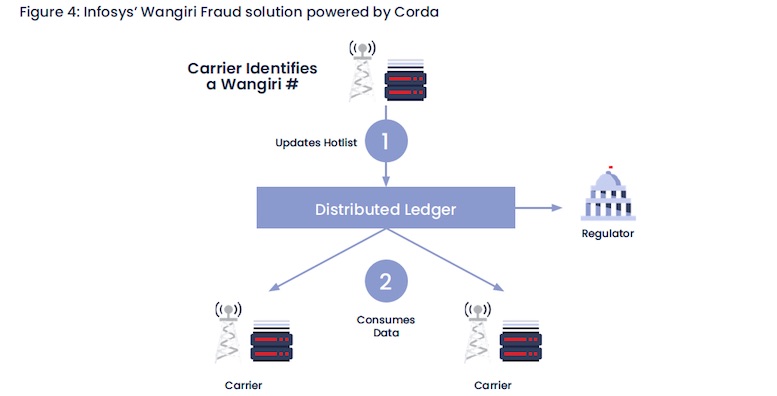 This diagram is taken from a new R3 brochure entitled “Telecoms Fraud: Market Insights Report” (pictured above). R3 is an American business that raised USD112mn to create and market Corda, its own version of blockchain. There are just two examples of Corda being used to tackle telecoms fraud per their very slim brochure. One is from my friends at Subex, and the other is the Infosys copycat version of the RAG Wangiri Blockchain. Roychowdhury observes in the brochure that:

Numerous attempts have been made to enable carriers to share “hotlists” of numbers they used by Wangiri fraudsters more effectively when these are identified.

He honestly wrote that, word for word. Does nobody proofread these documents before they are published?

However, these initiatives have achieved only limited success due to the inherent challenges posed by centralized architectures when seeking to share data externally.

Perhaps he should give some examples of these initiatives. Or maybe this is waffle from somebody who knows nothing about telecoms fraud and is trying to desperately sell a new blockchain ledger by repeating what somebody else told him.

To help telcos tackle Wangiri Fraud, Infosys has developed a solution powered by Corda… The solution comes complete with built-in analytics and supports incentive models to encourage collaborative participation among telcos. It can be integrated with an operator’s internal fraud management system (FMS) or can also work as a stand-alone solution.

People sometimes wonder why I question the commitment of some who claim to support collaboration. The behavior of Infosys is an example of why I question it. Why does a USD12bn business decide they need to ‘encourage collaborative participation among telcos’ long after a tiny nonprofit has already proven it can be done? They do it because the word ‘collaboration’ is coming out of their mouths but their eyes only see dollar bills, and they have neither the imagination nor the guts to try an idea until somebody else has shown it works.

Infosys could have gone about this differently. They could have approached RAG with a view to becoming partners in a collaboration that has already engaged the interest of telcos worldwide. That was the impression we had when they requested access to the RAG Wangiri Blockchain. They could, at least, have been honest in stating their intentions. Infosys instead decided to spend their marketing and development budgets on competing with an existing anti-fraud collaboration, after engaging in low-grade corporate espionage. The R3 brochure does not list any users for the Infosys wangiri blockchain. It is safe to assume there are none. Getting telcos to collaborate is hard enough; they have zero interest in assisting businesses that obviously intend to exploit them.

There is another lesson to be learned here, and it relates to the opening quote from management guru Tom Peters. Nobody ever delivered collaboration by talking about things they would like to do in future. You have to do it now. Collaboration is like swimming or riding a bike. You learn how to do it by actually doing it, not by talking about it. So if you want to become good at it, then you should start immediately. Infosys and R3 are talking about things they hope will happen in future; they may know about technology, but they have no idea how to persuade telcos to collaborate. If they understood collaboration they would know it is not a good idea to screw the people you are trying to emulate, and who already work with the firms who have most enthusiastically supported collaboration thus far.

A lot of people who never previously heard of RAG have noticed the RAG Wangiri Blockchain. Some could have accomplished the same thing. There are both nonprofit associations and commercial businesses that have the technological resources and industry connections to have delivered an identical solution to the RAG Wangiri Blockchain, and then persuaded telcos to use it. But they did not act. If they had acted first, I would have supported them. However, those who offer support cannot always rely on receiving support in turn. That is another reason why collaborative initiatives often fail. I know this from personal experience, and it leads me to have little patience for opinions about collaboration from people who talk as if success is guaranteed.

Collaboration is not a rose garden where happy friendly people hand gifts to anyone who wanders into their vicinity. It is hard work. People do it for profit or because they care about the results. RAG’s philosophy is simple: we target the people who care the most. We find them, and then we reward them. We can reward them by doing everything possible to deliver the results they care about. Many times this approach will still fail. Sometimes it will work. Either way, this ethos represents the one aspect of RAG that I wish people would copy more often.

Please help us to defeat wangiri fraud by joining and contributing to the RAG Wangiri Blockchain if you have not done so already. You can learn more here.