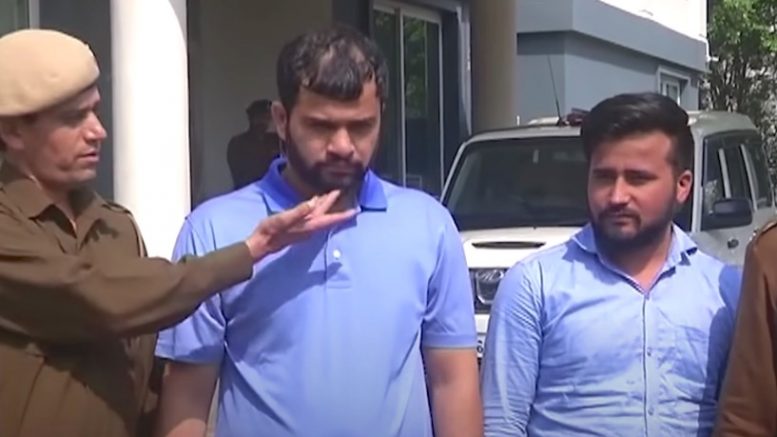 A recent Commsrisk article referenced ‘Operation Chakra’, a series of raids by the Indian police on locations associated with cybercrime including scam call centers that defraud foreigners. But does Indian law enforcement follow up arrests by prosecuting the criminals? That is the question asked by well-known YouTube scambaiter Jim Browning in a new video that follows up the consequences of his most famous sting. In 2020, Browning published coverage from CCTV cameras inside a scam call center he hacked, then shared the intelligence he gathered with BBC documentary makers so they could interview the scammers’ victims. Browning now reaches the shocking conclusion that the Indian authorities made no serious attempt to penalize the masterminds behind the scam operation he unveiled, despite publicizing their arrest.

Per Browning’s research, the CEO of the scam operation, Amit Chauhan (pictured with a policeman lifting his head towards the cameras) was released on INR50,000 (USD600) bail just three weeks after his arrest. Chauhan then set up a new scam operation, with the same business partner and in the same building, whilst he was out on bail. It took a full 18 months before Chauhan’s case was heard in court, but there was no prosecution. As Browning explains:

[Chauhan’s] defense team asked that the charges against him should be dismissed… I am told that the prosecution failed to make a reply against this application so the whole thing seems to have been dismissed.

Chauhan’s scam call center generated revenues of up to half a million dollars each month. This was accomplished by tricking a series of victims into believing their computers had been hacked, then charging them thousands for bogus security services that they did not need and which provided no benefit. Prosecutors could not be bothered to pursue the case, despite Browning obtaining copious evidence of wrongdoing from the call center’s own systems.

To make matters even worse, the scammers then sought to enable further crime by trying to expunge any record of their wrongdoing from the web. Ill-considered rules that give people the ‘right to be forgotten’ are easily exploited by criminals. The scammers applied to have every reference to their scam removed from Google searches, YouTube and news websites. When it comes to law enforcement, it appears lawyers and politicians keep making it difficult for the public to protect themselves whilst they pursue none of the legal reforms needed to effectively deter online criminals.

We can hardly blame the Indian authorities for never taking the trouble to punish scammers who steal from victims in the USA when the US authorities never punish the businesses that facilitate illegal calls. Law enforcement in this arena is broken beyond belief, which is the why the public struggles to comprehend the extent to which public servants are failing them. The people employed to protect the public from scam calls are simply too incompetent, lazy or corrupt to tackle a growing cause of harm to ordinary people everywhere.

Journalists abet the failure of law enforcement by reporting meaningless stories like the arrest of somebody who is later released, or the issuing of a nominal fine that will not be collected in practice. The mainstream press does nothing but rearrange the news releases issued by law enforcement agencies, so they never run follow-up stories that would show how law enforcement is engaged in manipulating public perceptions without ever deterring hardened professional criminals who understand how the legal system really works.

These are the circumstances that lead the public to turn to online vigilantes to save them from pervasive crime. But we should not have to rely on private individuals like Jim Browning to take on the criminals, and they cannot succeed if prosecutors always refuse to levy serious punishments. The only way forward is to use the political system to put pressure on elected officials and the prosecutors they appoint. Public opinion needs to force them to take responsibility for real enforcement of the law instead of playing a game that generates quick and easy headlines, only to later deflect blame by asserting the rise in crime must be the fault of others.

It is not easy to change public opinion, but I need to do it, you need to do it, and everyone in the communications industry needs to do it, because our networks enable these crimes. We are risking the public losing faith in phone services long before they realize the biggest obstacle to justice is the complacency of police and prosecutors.

You can watch Jim Browning’s epilogue on the failure to prosecute Amit Chauhan and his fellow fraudsters, ‘Spying on the Scammers Part 5’, by clicking this link or via the embedded video player below.