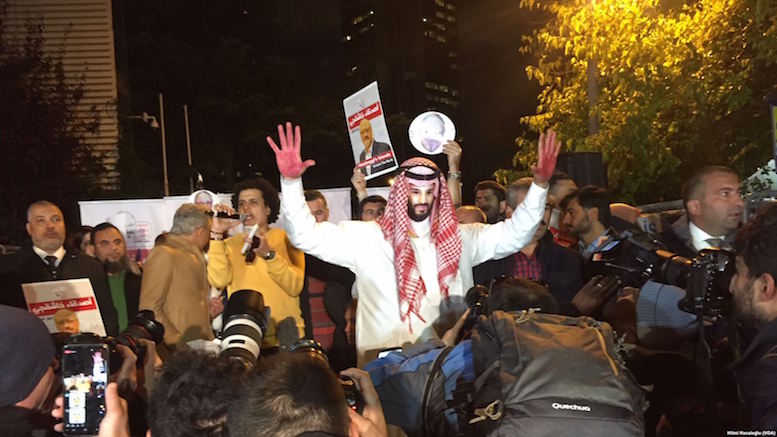 The world has been shocked by the murder of Jamal Khashoggi, a Saudi journalist, power-player and opponent of his country’s ruling regime who was brutally killed by agents of the Saudi government when he visited the Saudi consulate in Istanbul. The response has taken many forms, including protests (like the one pictured above, held outside the consulate), statements of condemnation, and Khashoggi has been named as Time’s ‘Person of the Year’ alongside other journalists who suffered persecution. One positive that may come from the scandal is an increase in public awareness of the spread of spyware to intercept phone communications. CNN reported that Israeli-developed spyware had been used to compromise the WhatsApp messages sent between Khashoggi and a confidant.

In more than 400 WhatsApp messages sent to a fellow Saudi exile in the year before he was killed at the Saudi consulate in Istanbul, Khashoggi describes [Saudi Crown Prince Mohammed] bin Salman — often referred to as MBS — as a “beast,” a “pac-man” who would devour all in his path, even his supporters.

CNN has been granted exclusive access to the correspondence between Khashoggi and Montreal-based activist Omar Abdulaziz.

Abdulaziz on Sunday launched a lawsuit against an Israeli company that invented the software he believes was used to hack his phone.

“The hacking of my phone played a major role in what happened to Jamal, I am really sorry to say,” Abdelaziz told CNN. “The guilt is killing me.”

Abdulaziz first spoke publicly about his contact with Khashoggi last month after researchers at the University of Toronto’s Citizen Lab reported his phone had been hacked by military-grade spyware.

According to Bill Marczak, a research fellow at the Citizen Lab, the software was the invention of an Israeli firm named NSO Group, and deployed at the behest of the Saudi Arabian government.

The CNN article paints a picture of two political activists discussing secret plans to encourage opposition to the Saudi government, then fearing the worst when they were told the Saudi regime had somehow learned of those plans.

Omar Abdulaziz is not the only person to have fallen victim to Saudi spying powered by Israeli tech. Amnesty International has demanded Israel revokes the license of NSO Group after their spyware was found on the phone of a staff member who worked on Saudi campaigns.

NSO Group is also subject to other legal actions. Earlier this year two law suits were filed by a Qatari and several Mexicans, who believe the Israeli surveillance tech was being used by the United Arab Emirates.

The genie is out of the bottle; technology for electronic comms surveillance cannot be un-developed. Some consequences can be curbed by lobbying governments, taking businesses to court, and campaigns that warn people not to install malware. These are palliatives, not a cure. There will always be governments that rationalize the need to spy, and there will always be businesses that sell them the means. Morality is irrelevant; the ruling Arabs who publicly lambast the policies of the Israeli government are happy to buy technology which was developed to monitor Palestinians. It will only be possible to fight fire with fire, by using technology to oppose technology. As the technology for surveillance improves, so must the technology used to protect privacy.