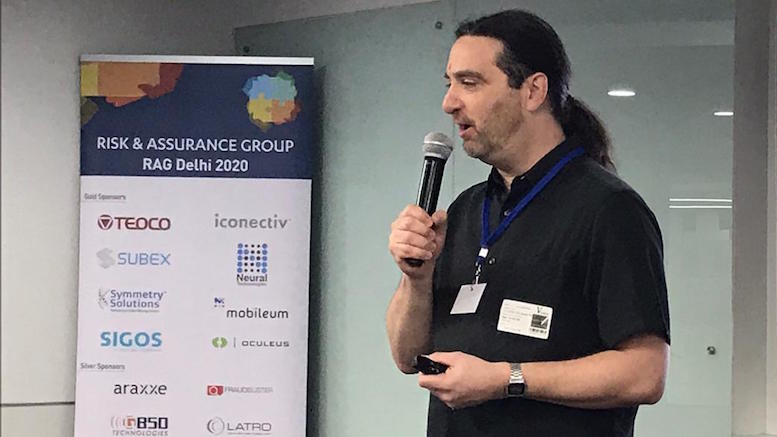 Whilst attending RAG Delhi 2020 (pictured) I was reminded of how our single human race is comprised of many different cultures. It is a generalization, but Indians dislike speaking ill of others. As a consequence, one kind soul I met at RAG Delhi politely asked me to refrain from criticizing people who were not at the conference. He was not the first person to proffer this advice to me, and I admit there are many reasons why I should follow it. But I will not.

To insist on the need for open criticism is inherently confrontational. It gives me no pleasure to admit this essential truth, or to acknowledge that criticizing others doubtless leads to increased criticism of everything I do. But let me illustrate why criticism, and even confrontation, are unavoidable if we wish to do the best job we can for our employers, for our customers, and for our professional community. Prior to RAG Delhi 2020, somebody sent the following message to RAG:

I don’t want to cheating someone (sic), I’m part of telco industry same as you are.

Why you divide us from the telco.

The message was sent by Hamid Karimi, who describes himself as the CEO of CTEG, a consultancy and “solution provider” based in Iran. At first glance, you may sympathize with Karimi, who was enquiring why he had been denied a free seat at RAG Delhi. The reasons for denying his request are straightforward:

Some of you are now glad that Karimi was excluded from the conference, although you are only just learning who he is. You may feel this way because you played by the rules and your business paid for entry to the event, so you would be unhappy to find yourself competing for attention with somebody freeriding on your contribution. Others may still feel RAG should have given Karimi a free seat, because he seems like a nice person. He said he should not be ‘divided’ from telcos, but I disagree. Does that make me divisive?

Let me tell you more about Hamid Karimi. A while ago I wrote about the many LinkedIn profiles associated with Karimi’s business, CTEG. Whilst Karimi’s profile appears genuine, the other CTEG profiles were vague, repetitive, had been created at the same time, and used the photographs of TV actors and singers. Maybe you connected with one of those profiles; perhaps you were drawn to the stunningly attractive people captured in those photos. If you check those profiles now, you will find all the photographs have been removed. Only Hamid Karimi’s photo remains. Perhaps now you are glad you did not meet him at RAG Delhi 2020, or maybe you are still wondering why there were no registrations from the beautiful consultants who work for him. You might be a generous person, believing the photographs were a mistake, or they were only meant to be a temporary filler until he could take real photos of his numerous staff.

So let me tell you some more about Hamid Karimi and CTEG. Their business website displays the logos of several well-known suppliers of RAFM tools and services. The implication is that CTEG partners with those businesses, some of whom are sponsors of RAG. I have not had the time to ask all those firms about their relationship with CTEG, but the ones I spoke with have never heard of CTEG. They had not given permission for their brands to be used this way. So how glad would you be, if you had learned this after you began negotiating with CTEG for the supply of these products and services?

Hamid Karimi is my enemy, and I am his enemy. His way of doing business is contrary to mine, and the two are incompatible. That is why Karimi will never participate in anything run by RAG, if I have any say in the matter. Of the two of us, it only benefits me to be truthful, because building a reputation for providing superior information is how I obtain the advantage in this field of endeavor. Others use different methods.

We should not be shy about the fact that it hurts me to be Hamid Karimi’s enemy. He is a popular person on social media, even after we discount the connections made by his formerly photogenic colleagues. Karimi has 5,455 LinkedIn followers, which is many more than me. I have met ‘digital marketers’ that literally bragged about their social media following but who have far fewer followers than Karimi. So anything negative I say about Karimi could be countered by him saying negative things about me. But I will still say what I am going to say. That is because I seek the respect and camaraderie of those who want the truth. I care less about those who do not distinguish between fact and fiction.

Karimi is not the most popular enemy I have. That distinction goes to Gideon Ikwe, a Nigerian consultant with 30,267 followers on LinkedIn. He is my enemy because he stole intellectual property from others, and shared it on the internet, presumably to attract more followers. I can still remember the names of some of the senior RAFM managers who publicly thanked him for doing this, without stopping to ask if the content he shared actually belonged to him. It galls me that LinkedIn continues to facilitate his unlawful activity, having told me I should sue him in Nigeria if I want him to stop infringing intellectual property. As stubborn as I am, and as much as I feel obliged to police the unlawful actions of some telecoms risk practitioners, I do not believe that I must single-handedly instigate law suits around the world to correct the flaws of our global but often immature profession.

It is not just practitioners in developing countries that receive my criticism. When the Telecommunications UK Fraud Forum (TUFF) infringed intellectual property they were given the same treatment as Gideon Ikwe. Needless to say, they did not like it. Their lawyers threatened to sue me for pointing it out. One of their Board members called me and said I had drawn attention to their unlawful activity in order to gain publicity. He was right, but not in the way he thought. I do believe that if every professional in our community habitually followed a common and reliable source of news about our community then that could be used to highlight, and hence discourage, wrongdoing. Thankfully, TUFF accepted that they had broken the law, reversed their mistake and apologized for their failings. They took their shellacking in the way professionals should. That is why I do not consider them to be my enemies, though I can understand why they may be wary of me.

Perhaps it was inevitable that somebody would mention ‘Papa’ Rob Mattison during RAG Delhi 2020. Over the years I have been advised by several Indians to leave Mattison alone. In contrast, no American professional has ever told me to go easy on the self-appointed Global President of Revenue Assurance, because none of Mattison’s countryfolk have heard of him. Nobody has received more criticism from me than Rob Mattison, and nobody has been so profoundly deaf to my complaints. The number of people doing our kind of work is small, but charlatans thrive when reputations count for nothing, because nobody knows anyone else. In those circumstances, anyone can pretend to be anything. Actual accomplishments become irrelevant; why spend a lifetime mastering one skill, when it takes just a day to write the résumé of somebody who claims to have mastered them all?

The absence of a collective memory is ideal for the charlatan, because it helps them accelerate their progress through life. Unfortunately, it has the opposite effect on our community. Collective endeavors are slowed down by dishonest individuals, because they steal the rewards from the contributors who most deserve them. I believe the absence of a collective memory is crucial to understanding why RAFM has made far less progress than many of us had hoped.

During the conference I received a call from somebody who had wanted to attend, but was unable to do so. But he then offered me some words that were intended to give me comfort. Though he missed the opportunity to learn from RAG, he had engaged Rob Mattison to provide training the following week. Needless to say, this person was not familiar with my critique of Mattison and GRAPA. I relate the story to illustrate why, irrespective of the number of enemies I have already made, there will still be many other professionals who trust the stories that people tell about themselves. We have created no alternative to blind trust, partly because it is impolite to criticize, and partly because it is more profitable to get along with everyone than to admit the need to enforce some division between good and bad.

As far as I know, I am the only person who was ever banned from joining GRAPA. I take that as a sign that my criticisms have merit. It is peculiar that a profession which encompasses methods to identify fraudsters has never found it necessary to check any of the claims made by the people working within it. Our leakages are guesstimates, our quotes are unsourced and our qualifications are whatever Papa Rob says they are.

In a situation like this, only the mediocre can get along with everyone. Anyone who aspires to be better must distance themselves from the practitioners who cannot be trusted. That leads to a necessary contrast, but also to criticism, confrontation, and even conflict. But I can see no alternative, unless I learn to love mediocrity. To do that would mean watching idly as telecoms risk management continues to flounder forward in the haphazard and desultory fashion it has progressed over the last 20 years. And that is why I would be proud to be judged by the calibre of my enemies, as much as I am judged for my friends.

Why LinkedIn Marketing Matters Less Than You Think