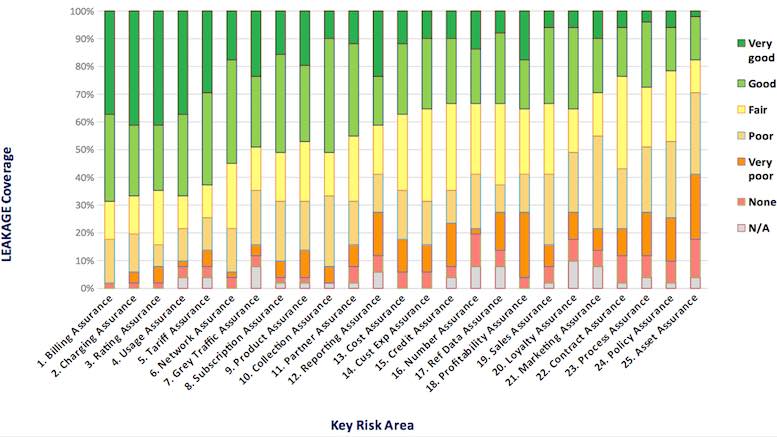 51 businesses completed the survey, which was conducted by the Risk & Assurance Group (RAG) in partnership with Symmetry Solutions. Survey leader Geoff Ibbett is still reviewing the detail of the findings, but his initial coverage graph (see above) shows how telcos rated their own coverage against 25 categories of leakage. The data shows most telcos have limited or zero coverage of many kinds of leaks detailed in the current version of the RAG Leakage Catalog, the telecoms industry’s most comprehensive inventory of revenue and cost leakages.

Most telcos reported high levels of coverage in the areas that have longest been associated with revenue assurance, such as billing accuracy, usage reconciliations, tariff management and rating accuracy. Around 40 percent of telcos reported that they had no gaps in coverage for these core pillars of revenue assurance. However, roughly 20 percent of telcos still consider themselves to have ‘poor’, ‘very poor’ or zero coverage in these fundamental areas.

Industry leaders emphasize the need to broaden the remit of revenue assurance teams so they provide a more extensive form of assurance. This superior role has come to be known as ‘business assurance’. Despite the general agreement on the need to cover a wider variety of revenue and cost leakages, there is no consensus on the leakages that business assurance teams should monitor. The RAG Leakage Catalog offers the best current definition of what might be included because it has been crowdsourced by asking telcos around the world to submit genuine examples of leakage. Based on this ambitious perspective, only a few telcos are covering most of the leakages that the industry has identified.

Fewer than 20 percent of telcos rated themselves as having ‘good’ or ‘very good’ coverage of asset assurance, an area where wasted spending and lost assets can easily be worth millions of dollars each year. Marketing promotions, loyalty benefits, fair usage policies, and compliance with contracts are some of the other areas where many telcos may be losing large amounts of money because insufficient resources have been dedicated to providing assurance.

Geoff Ibbett will issue a report on the survey findings in due course, but this first graph should serve as a wake-up call for many who complacently assumed that the challenges of revenue assurance had all been overcome. In reality, telcos have plugged leaks only when they fall within a narrow definition of revenue assurance. Many other kinds of mistakes and inefficiencies remain unnoticed because nobody is responsible for them.