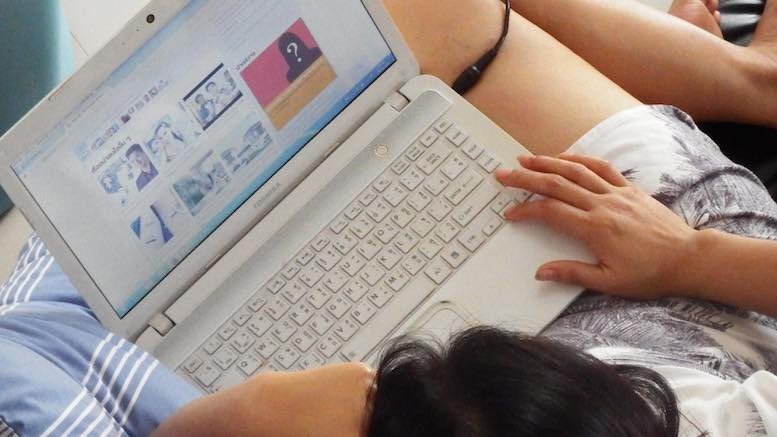 Is unauthorised linking to unlicensed content an act of communication to the public within Article 3(1) of the InfoSoc Directive and, if so, a potential copyright infringement?

Last month the Court of Justice of the European Union (CJEU) addressed this very question in GS Media, C-160/15 and concluded that one must not only consider the classic duo (1) act of communication + (2) to a public, but also “several complementary criteria, which are not autonomous and are interdependent” [para 34]. These, according to the CJEU, include whether the posting of hyperlinks is carried out for profit and whether the person who posts the link has knowledge of the unauthorised character of the content linked to.

A simplified summary of the situation is: 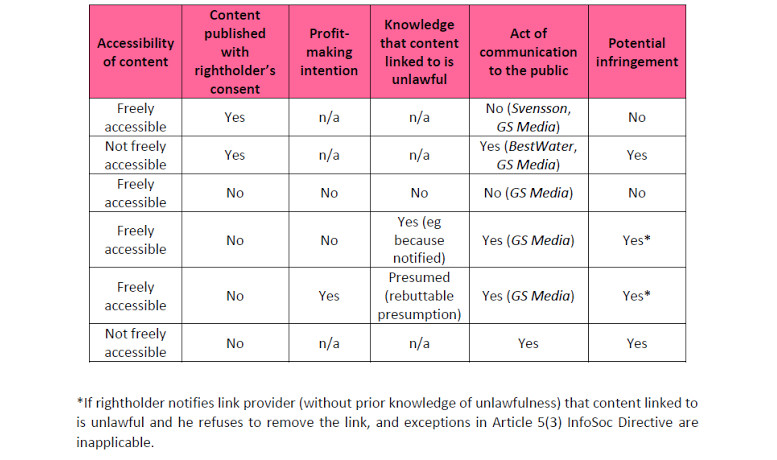 After GS Media, the question has become: how to apply this CJEU judgment in practice?

In what appears to be the first national application of GS Media, the answer comes from Sweden. On 13 October last the Attunda tingsrätt (Attunda District Court) – in the context of small claims proceedings within Regulation 861/2007 – ruled against a Belgian media company for providing a link to a video that had been uploaded onto YouTube (where it is still available) without the permission of the copyright owner/claimant.

Here’s how it went.

Someone (not Ms Jonsson) uploaded the video on YouTube. On 9 January 2012 the YouTube video was embedded on the L’Avenir website run by the defendant, in the context of an article describing the incident.

The claimant had neither authorised the publication of the video on YouTube, nor its embedding in the L’Avenir article.

In her action before the Attunda District Court, Ms Jonsson claimed that L’Avenir had infringed copyright in her video by both embedding it on its website and publishing a frozen still of the video. She sought damages for EUR 1931 against the defendant, as well as award of litigation costs.

The Swedish court stated at the outset that the video is protected by Swedish copyright law, and noted how the circumstance for which the claimant’s video was (and still is) available on YouTube does not mean that no copyright infringement has occurred. This is because the claimant had not authorised the publication of the video on YouTube, nor – apparently – anywhere else on the internet.

Considering whether the provision of an embedded link to content whose publication on a third-party site (ie YouTube) has not been authorised would amount to a copyright infringement, the court noted that there is no Swedish case law regarding the question whether linking can be considered an act of communication to the public. This seems to suggest that, not only was the Svensson Swedish installment eventually settled, but also the C More Swedish proceedings were. Although C More was about the right of making available to the public rather than communication to the public, any decision by Swedish courts could have arguably provided some guidance.

This said, the court referred to the InfoSoc Directive and relevant CJEU case law on linking, notably Svensson and… GS Media.

In relation to the latter the court recalled the presumption [iuris tantum, ie rebuttable] that the CJEU discussed at para 51 of the decision:

when the posting of hyperlinks is carried out for profit, it can be expected that the person who posted such a link carries out the necessary checks to ensure that the work concerned is not illegally published on the website to which those hyperlinks lead, so that it must be presumed that that posting has occurred with the full knowledge of the protected nature of that work and the possible lack of consent to publication on the internet by the copyright holder. In such circumstances, and in so far as that rebuttable presumption is not rebutted, the act of posting a hyperlink to a work which was illegally placed on the internet constitutes a ‘communication to the public’ within the meaning of Article 3(1) of Directive 2001/29.

According to the court, it was “obvious” that L’Avenir had published the link to the claimant’s YouTube video with the intention of pursuing a profit (yet the court did not really explain what evidence supported the conclusion that in this case the defendant had a profit-making intention). According to the court, L’Avenir had not been able to demonstrate that it had no knowledge of the unlicensed character of the video embedded on its website. Hence, L’Avenir was found to have infringed the claimant’s copyright by linking to the YouTube video without Ms Jonsson’s permission.

Turning to the issue of the reproduction of a frozen still (you click on it, and the embedded video can be played) from the claimant’s video on the L’Avenir website, the court ruled that this amounted to an infringement of copyright for reproducing part of her work. When reading the judgment, I was a bit surprised not to see any discussion of whether reproducing a single frame from a video could be regarded as the reproduction of a protectable, ie sufficiently original, part of a work (the whole video in this case) in at least an Infopaq sense.

The court also ruled that, by failing to acknowledge the name of author of the video and frozen still, the defendant had also infringed the claimant’s moral right of attribution pursuant to section 3 of the Swedish Copyright Act.

The judgment can now be appealed, and it will be interesting to see whether L’Avenir decides to do so. Overall, the judgment seems to adopt a fairly strict interpretation of GS Media.

First, it is unclear in what sense the defendant published the link to the claimant’s work to pursue a profit. Although in favour of the Swedish court’s approach there is the fact that the CJEU judgment is very unclear on this point as well, it might appear that getting the label “profit-making intention” is VERY easy and – with it – the presumption of knowledge and… prima facie liability.

Secondly, the judgment does not contain any discussion of whether one or more copyright exceptions would apply to this case (news reporting? quotation? criticism/review?). Yet, the CJEU in GS Media said that such considerations MUST be undertaken.

The latter point leads to a final question. On the one hand, it may seem that link providers are seen and treated somewhat with suspicion: profit-making objectives may be often considered present, and – with them – the duty to make sure links are being provided to licensed sources. On the other hand, copyright owners seem to enjoy a more favourable treatment: in this case, it was not even required to discuss whether the claimant had notified the defendant about the unlicensed nature of the video linked to or even attempted to have the video taken down by YouTube (note: YouTube, not a prima facie ‘rogue’ website).

But do copyright owners have any duty to police what use is being made of their works, or can they just expect others to behave in a way that is respectful of their rights? In this sense, an analogy with trade mark law (and ‘genericide’) can be drawn. In his Opinion in Backaldrin Österreich The Kornspitz Company GmbH, C-409/12, Advocate General Cruz Villalón had held the view that the owner of a trade mark is required to be “vigilant with regard to the protection of his trade mark” (para 83). Can the same be said also for copyright owners, or does such duty of vigilance only apply to third parties, including link providers?