‘Curiouser and curiouser!’ cried Alice (she was so much surprised, that for the moment she quite forgot how to speak good English)

Alice in Wonderland by Lewis Carroll

If Ofcom was a character in a Lewis Carroll story, it would be the Mad Hatter. No matter how insane the existing logic behind the regulations that are meant to protect UK customers from overbilling, Ofcom seems intent on making them insanier and insanier. They were not satisfied with taking away the mandatory measurement of bill accuracy, and simultaneously arguing it was a reduction in the regulatory burden that would guarantee bills will be more accurate than before. They launched unprecedented investigations into compliance with the rules, and seeming failures to comply with them, but have followed up with an idea to:

…assist customers for whom the accuracy of billing is an important criteria when comparing CPs [Communication Providers] or seeking information about their CPs’ billing.

Because, obviously, the regulator thinks there must be some other customers who do not give a damn if they are charged the right amount.

So what is the idea? Putting a logo on the customer’s bill, to say it has been audited. So if you were one of those Vodafone customers who recently complained about your bill, you can gain the extra comfort of seeing a distinctive Ofcom-designed logo at the top of the bill, confirming that Vodafone’s bills have been audited by the same people for well over a decade, and they never found any of the mistakes you just did. Hoorah!

I think this is a terrible idea, but I hope they do it. The Ofcom scheme for delusional promises about billing accuracy has always been divorced from the number of complaints made by customers, and the value of credits they receive. The only thing that saved customers from spotting the anomaly is they had no idea they were being ‘protected’ by those audits. If they learned about those audits, they might get righteously angry at Ofcom, as well as at the telcos who messed up their bills.

Nothing has ever stopped UK telcos from telling their customers that their bills have been audited. The reason that nobody bothers is because telling the customers about an extremely unconvincing audit is more trouble than it is worth. Which of the following would make you more angry: noticing that your bill was wrong; or noticing that your bill was wrong after being told there is no need to check your bill because somebody else has checked it first?

One sane British telco tried to speak sense to the Mad Hatter:

One CP – Three – indicated that it was satisfied with the general awareness of the Metering and Billing Scheme and did not feel customer awareness was currently a concern.

In other words: nobody cares about Ofcom’s Metering and Billing scheme, and that is fine by them!

But we are looking through the regulator’s looking glass now, and somebody at that regulator feels real problems can be addressed by making work for a lame graphic designer. Their task is to create a logo for a penny-pinching pseudo-audit which is so totally insignificant compared to any important regulations that literally no telco cares enough to lobby for its reform.

The proposed logos are pictured above. They are as unashamedly misleading as the regulations. For a start, if you write a sequence of words like: “billing system approved Ofcom” then most people will assume that means “billing system approved by Ofcom”. Which would be completely wrong. Because Ofcom neither audits nor approves anything. They just wrote the rules, whilst others do the actual auditing and approving. It also makes you think the billing system was approved. Which it is not. Any and every system should be checked, as necessary to validate the amount that ends up being charged to the customer. And the billing system could be wrong in lots of ways – for example, by getting your name wrong – which are not covered by the audit.

In addition, these four logos suggest there are four simple and basic types of approval, whilst the truth is that the scope of each approval is defined so specifically and so pedantically that the wording of an actual approval document looks like something written by the Mad Hatter’s lawyer cousin, after prolonged negotiation with the March Hare.

But please write to Ofcom and tell them you love the idea of logos for accurate bills. Here is the proposal, if you want to read more before you do. I recommend just one suggestion, that would turn this tea party upside down, and give Ofcom a taste of their own psychiatric medicine. There should be just one logo, and it should look like this: 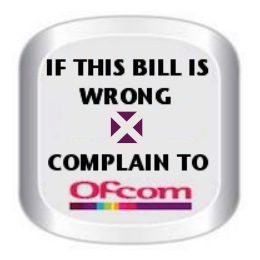 The ‘Amazing’ Correlation that Reveals the Flaw in US Robocalling Rules