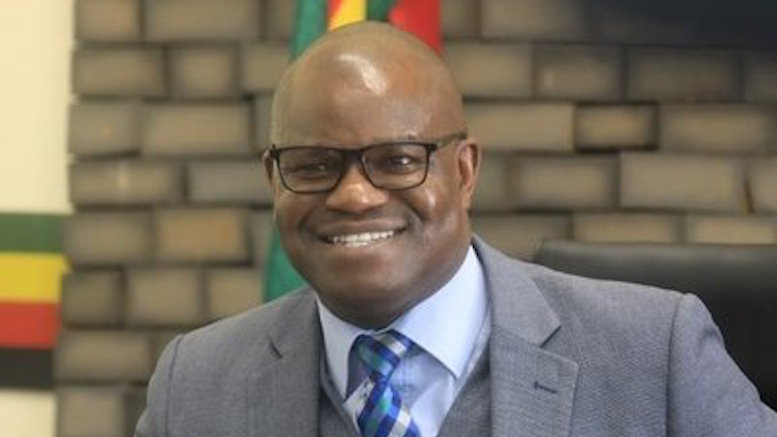 The economic crisis faced by Zimbabwe has taken a new turn as the government’s attempt to suspend mobile money services was rebuffed by the country’s biggest provider, Ecocash, a spin-off from mobile operator Econet Wireless. The government’s intention is to increase control of Zimbabwe’s national currency in order to tame worsening inflation. They had earlier accused mobile money providers of ‘conspiring’ with the Zimbabwe Stock Exchange to sabotage the economy.

The Financial Times reports that the administration of President Emmerson Mnangagwa had singled out Ecocash for special criticism:

Mr Mnangagwa’s government said that it possessed “impeccable intelligence which constitutes a prima facie case whereby the phone-based mobile money systems of Zimbabwe are conspiring, with the help of the Zimbabwe Stock Exchange, either deliberately or inadvertently, in illicit activities that are sabotaging the economy”.

“Ecocash, in particular, is acting as the centre pivot of the galloping black market exchange rate and therefore fuelling the incessant price hikes of goods and services that are bedevilling the economy and causing untold hardship to the people of Zimbabwe,” the government said.

Secretary for Information Nick Mangwana (pictured) took to television to claim that mobile phone companies were guilty of the “fraudulent generation of money”. He also said, “investigations have discovered… transactions which actually create money, where people just digitally add money to accounts” and that phone companies were to blame for “money running riot”.


Ecocash responded by assuring customers that their service would continue because the decision to interrupt mobile money could only come from the central bank, not the President’s administration. 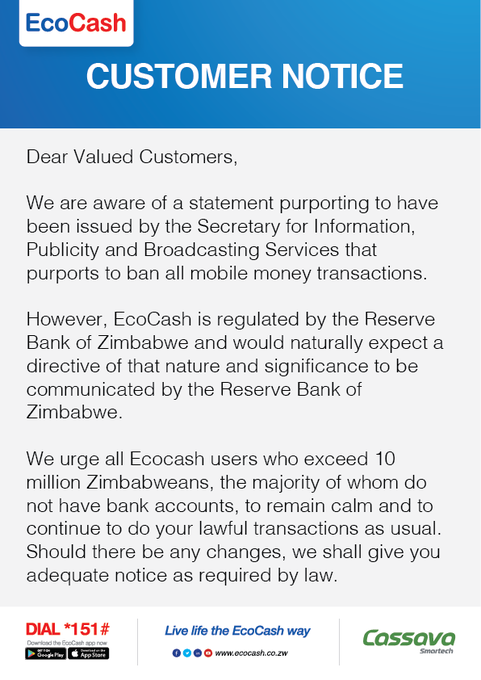 Mangwana then took to Twitter on Saturday to share a photograph of a letter from the central bank’s Governor, saying mobile money agents are immediately prohibited from facilitating mobile financial transactions. The letter also says merchant transactions are suspended except for receiving payments and paying utilities up to ZWD5000 (USD13.82) per day.

The RBZ says
a) All mobile money agents are suspended from facilitating mobile financial transactions with immediate effect
b)All merchant transactions are suspended except for receiving payments and paying utilities which is limited to ZW$5000 per day. pic.twitter.com/NgQQ8iUMPf

Inflation in Zimbabwe is currently running at around 800 percent due to the plummeting value of the new Zimbabwean dollar, which was introduced in 2019. Before the adoption of the new national currency, Zimbabwe had relied on the domestic circulation of multiple foreign currencies, including the South African rand, British pound and Indian rupee. Zimbabwe legalized the use of foreign currencies for domestic transactions in 2009, as it proved to be the only way they could stop runwaway hyperinflation. This led to the withdrawal of the previous Zimbabwean dollar from circulation. Ordinary Zimbabweans find it difficult to obtain the latest form of cash because relatively few notes have been printed, forcing them to depend on mobile money for basic payments.

Ecocash is the dominant mobile money provider in Zimbabwe, with 10 million users amongst a country of 14 million people and over 99 percent of the mobile money market by transaction value. Most Ecocash customers have no conventional bank account, and poor access to cash and banking services has driven the adoption of mobile money across the country. Zimbabwe’s central bank reported that mobile money was used for 84.8 percent of all transactions and 22.6 percent of the total value of transactions during the last quarter of 2019. It is difficult to imagine the scale of the impact on everyday lives if Ecocash services were suspended for any length of time.

Bloomberg reports that the government has also made ominous threats to ‘investigate’ mobile money providers.

The suspension of monetary transactions by companies including Econet Wireless Ltd. unit Ecocash will “facilitate intrusive investigations, leading to the arrest and prosecution of offenders,” the Ministry of Information said in a statement…

They also warned that services would be suspended for as long as it takes to force providers back to their ‘original purpose’.

The measures will remain in place until mobile-money platforms have been “reformed to their original purpose and all the current phantom rates of exchange have converged into a genuine rate of exchange that is determined by market forces under the Foreign Currency Auction system,” it said.

The problem with this approach is that the loss of faith in Zimbabwe’s currency has not been prompted by service providers allowing money to flow freely between their customers, but by Zimbabwe’s administrators trying to rig exchange rates whilst printing money to support state enterprises and manufacture artificial growth. Earlier this year the International Monetary Fund (IMF) ended the monitoring of economic reforms vital to encouraging new funding for Zimbabwe after they discovered the central bank had repeatedly printed money. The IMF also warned Zimbabwe about printing money that was given to a company controlled by an ally of President Mnangagwa just a few months after the new currency was introduced. The new Zimbabwean dollar has lost almost all its value during its first year of use, and the intention to peg its value to the US dollar had to be abandoned as the exchange rate on the black market was four times worse than the official rate.

Governments sometimes try to use the law to overrule economic realities. Zimbabwe’s economy is in a mess, with the World Bank estimating it could contract 10 percent this year. In such circumstances, it will be tempting to order people to act as if money has a certain value, even if it does not have that value because the people rely on imports worth much more to them than the true value of the country’s exports. Whilst there are many benefits to shifting money from the physical to the electronic realm, including prevention of crime and improved consistency in the collection of taxes, there is the risk that governments will try to control everyone’s electronic wallet, and determine the price of everything. This is what is happening in Zimbabwe.

Readers in other countries may think the problems of Zimbabwe are not relevant to them. But we should all beware. Many governments are now actively accelerating the transition from cash to electronic payments. This is because digital transactions give governments greater visibility and control of both the economy and many other aspects of life. Zimbabwe has extremely severe economic problems, but many countries will have to cope with a mountain of debt accumulated in response to coronavirus, whilst tackling other expensive challenges. They will do this amidst an uncertain environment for trade, and facing the worrying prospect of a new cold war. Zimbabwe’s politicians will not be the only ones tempted to impose their version of the truth by controlling what ordinary people can do with their networked devices.