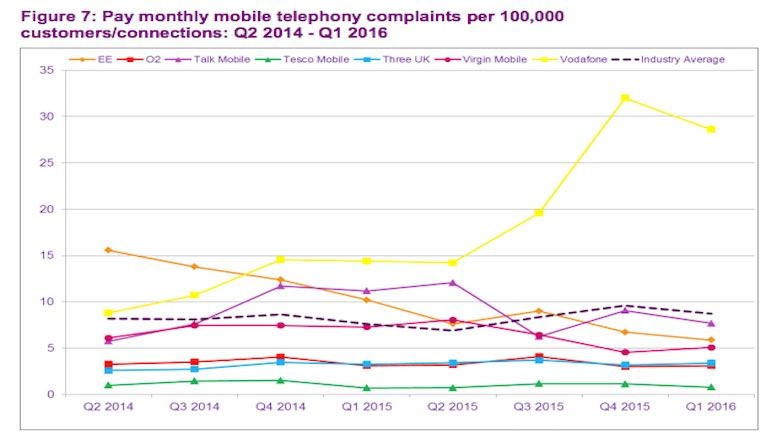 It is now boring to comment on the billing problems of Vodafone UK, and their inability to respond to all the complaints made by their postpaid mobile customers. The issues have dragged on for over 18 months, but neither Vodafone nor UK regulator Ofcom has communicated any serious plan to deal with them. So it comes as no surprise that the new quarterly update of complaints received by Ofcom has shown:

Just look at the graph above. You do not need to be a data scientist to see which telco has screwed up and continues to screw up. To be fair, the figures for the last quarter show a slight reduction on the number of complaints made by Vodafone customers during the quarter before. That means Vodafone’s last quarter is only the second worst quarter on record.

Commsrisk has already reported on Vodafone’s problems. There is nothing new to report – because nobody is taking worthwhile action to address those problems. The communication strategy of both Vodafone and Ofcom is to ignore these problems and to hope most of the public never become aware of them.

The problem with outrage is that nobody can stay outraged forever. They certainly cannot stay outraged longer than it takes Vodafone and Ofcom to take meaningful action to protect customers. However, some of the Vodafone customers who have been lodging these complaints may feel differently.

Why waste time and (digital) ink repeating the same story again? This is a travesty that should anger any professional who has worked hard to ensure customers are charged accurately. All that is left to document is how appallingly long it takes Vodafone to put things right.

The only good thing that comes from this shambles is that all UK telcos have seen the truth about their big-talking but ineffectual regulator. Ofcom will never be in a position to penalize another telco for inaccurate billing. Everybody now knows what Vodafone has known all along: when it comes to billing accuracy regulations, the UK regulator is a paper tiger. Ofcom may boast about how it protects consumers from inaccurate billing, but UK telcos are now conscious that there is no conceivable situation that would lead Ofcom to penalize them for inaccurate bills.

How could Ofcom levy penalties against any other telco, when they ran an eight-month ‘investigation’ into Vodafone’s billing woes and concluded no action was necessary? The UK regulator has stuck to that ludicrous position even though Vodafone complaints subsequently rose to being three times higher than the next worst mobile provider, prompting the UK media to lambast Vodafone and call for regulatory punishment.

I am glad so many honest hard-working assurance professionals strive to ensure their telcos deliver accurate bills every day, to every customer. These professionals are the front line in the battle against error; there are too few standing behind them, lending their support. The UK regulator likes to take credit for accurate telco bills, but this Vodafone fiasco proves what an irrelevance it truly is.