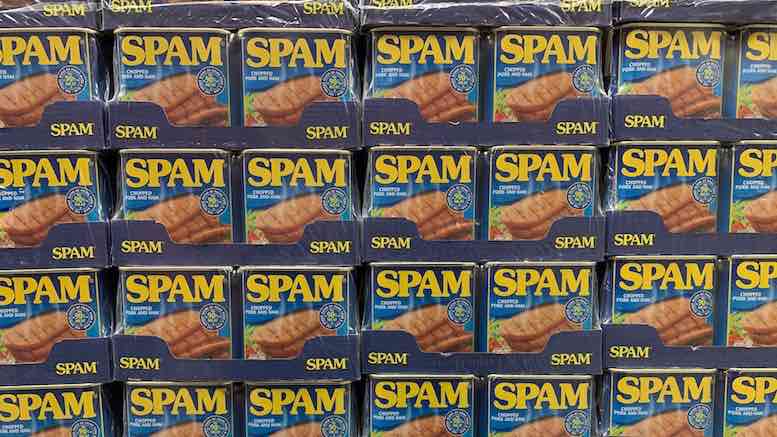 Do you ever have bad spam days, when it seems the spammers are using every channel to hound you? Last week I had an especially bad spam day.

I suppose I should be flattered that my LinkedIn activity now generates enough interest to attract a spammer hoping to sell to the readers of my posts a… [checks notes]… data integrity blockchain!? There was strong evidence that ‘Nurul BC, CEO of Spozom’ was a spammer. Even the name of the company made me think of spam. Perhaps it was originally called Spazam before they realized how that sounds.

Nurul BC’s LinkedIn photo looks just like movie star Emma Stone, who won the Best Actress Oscar in 2017 for her role in La La Land. Either Nurul BC so adores his Hollywood doppelgänger that he possesses the same black lace dress that Stone wore at the 2015 Cannes Film Festival, or else he just copied Stone’s photo and LinkedIn does not bother with even the most cursory checks for these things.

My suspicions that Nurul BC is not really a look-a-like for Emma Stone were confirmed by his LinkedIn profile including the URL of an Upwork account in the name of Nurul Islam. I observe Nurul is a man, although these days you are not supposed to judge a person’s gender except by reading their list of preferred pronouns. However, I guess Nurul identifies as a bloke because he did not bother to share his pronouns but he instead shared a different photo where his jawline is sporting week-old stubble.

Nurul’s Upwork profile clarifies the services he most likes to offer:

I guess you might call this the résumé of a full-time spammer. But why would any reputable business employ the services of a man like this? Specifically, I question why the developers of the Libonomy Blockchain decided that spam would be the best way to market a blockchain that promises to…

…introduce more transparency, equality and fairness in the world.

In the spirit of transparency I checked their details and found Libonomy is led by three Swedes whose website displays far too many photos of them but not much real information. A quick check of the UK’s corporate records informed me that the owner of Libonomy lives in Derbyshire, Northern England, whilst Libonomy’s office address in London matches one of those company secretarial businesses that also serves as the home of several thousand other companies. Whilst Libonomy may lack an office, start-up capital, or a coherent business plan, they do not lack ambition.

Our blockchain and its cryptocurrency will empower billions of people and ensure an easy global payment for everyone.

Some other suggested use cases for blockchain focus on validating identities and preventing fraud, but neither were mentioned by Libonomy’s sales pitch. I wonder why?