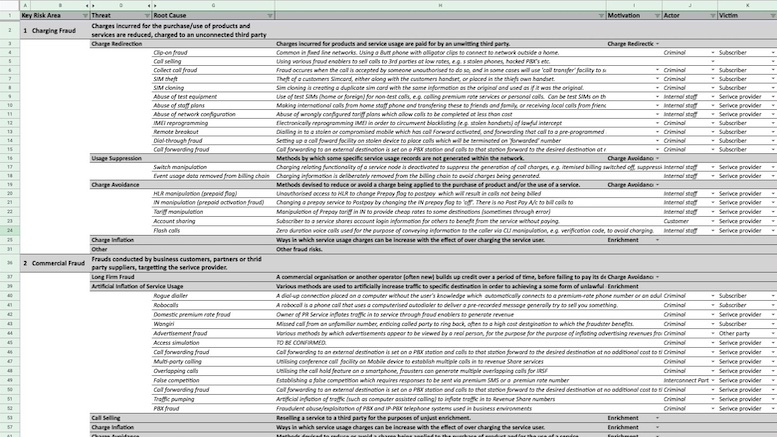 Do you need an extensive list of all the frauds that comms providers have to deal with? Do you want some way to explain to executive management the relationship between the frauds that are tackled by your organization’s current controls and all the other fraud risks that remain unmitigated? Do you already have your own compendium of frauds, but want to check its completeness by comparing it to an inventory assembled by a team of experienced anti-fraud practitioners situated around the world? Then you want the all-new RAG Fraud Catalog.

Geoff Ibbett of Symmetry Solutions has spent the last year engaging with fraud experts and extracting their knowledge to compile a fraud catalog on behalf of the Risk & Assurance Group (RAG). Version 0.1 of the catalog was released just in time for RAG’s Sydney conference, held a few weeks ago. You can read the catalog, you can download it, you can review it, and you can tell us about frauds that should be added to it. The only mistaken response would be to ignore it.

Geoff has already enjoyed tremendous success as the curator of the RAG Revenue and Cost Leakage Catalog, the largest inventory for business assurance professionals. Earlier this year RAG published version 5 of that catalog, illustrating how many telcos have adopted it in practice and how the inventory keeps growing. Now we expect the Fraud Catalog to grow even more rapidly. There has already been a tremendously encouraging response from the telco professionals who saw the catalog’s unveiling in Sydney and from others who have downloaded the catalog after it was mentioned in RAG’s monthly newsletter. The webpage for the Fraud Catalog has suddenly become the most visited page on the RAG website by a large margin.

The excerpt shown above represents only a small fraction of the entire Fraud Catalog. There are hundreds of risks organized under twelve categories of crime:

The catalog also identifies who are the victims for each type of crime and which kinds of actors are responsible for committing them, as well as documenting the root causes of these crimes.

There are two reasons why I expect the RAG Fraud Catalog will soon become the most extensive and most commonly used inventory of fraud risks faced by comms providers. First, it is made available free of charge. Anybody can download and use the catalog, without needing to pay any fees for the document or to become a member of RAG. That will make the catalog accessible to the maximum number of anti-fraud professionals, and not just those who work for telcos but also in other organizations like banks and universities. The only conditions are that: the Fraud Catalog cannot be resold for profit; everybody should provide feedback to our common version instead of creating their own separate versions; and copies that are circulated should give credit to Geoff and RAG.

The second reason to expect success is Geoff Ibbett. He has a unique gift for working with all types of people and then synthesizing their contributions into a consistent whole. Geoff is also exceptionally diligent, as he has shown many times in his career. It took me a while to persuade Geoff to create a fraud companion to his business assurance catalog, but he has made extraordinary progress since he set his mind to the task. There is nobody in the telecoms sector who is more dedicated to solving problems by bringing together the knowledge of people working all around the world.

In case you have still not clicked one of the links given above, then you should click here for the RAG Fraud Catalog.