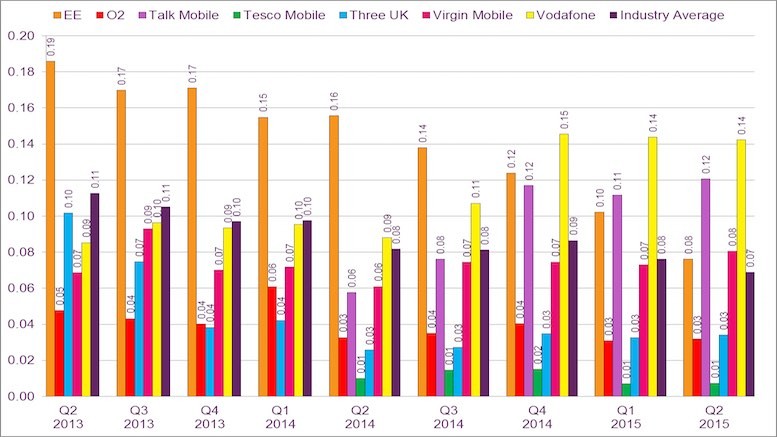 Previously we reported how problems with Vodafone UK monthly bills were generating an unusually high number of complaints. Another quarter has passed and official data from Ofcom, the UK regulator, shows no improvement whatsoever.

Between April and June, Ofcom received 0.14 complaints per every 1,000 Vodafone postpaid mobile customers, double the industry average of 0.07 (see graph above). An exceptionally high 34 percent of those complaints related to billing, pricing and charges.

There has been no reduction in the number of complaints about Vodafone UK postpaid mobile services compared to the previous quarter, which was also well above the UK industry average. 33 percent of complaints received between January and March were also to do with billing, pricing and charges.

In short, the total number of complaints has not fallen, and a mind-boggling third of all complaints are from customers who dispute what they have been charged. Vodafone UK’s mobile contract customers have now submitted more than double the billing complaints of their rivals for 9 months in a row.

The public have a right to question the action being taken by Vodafone and Ofcom. Both telco and regulator know there are serious problems with the accuracy of Vodafone bills, leading to a prolonged wave of criticism from dissatisfied customers. Ofcom’s attitude is especially perplexing. What signal is sent to other telcos when Ofcom routinely publishes stats to boost transparency, but then does nothing about one operator whose stats are much worse than the others?

The UK regulator has been officially ‘investigating’ the accuracy of Vodafone bills since June 11th. Has Ofcom learned nothing in the three months that have passed since then? How long does it take to examine some bills and see if they were right or wrong? Incredibly, Ofcom has not yet issued any public update on the progress of their investigation. Meanwhile, customers have continued to suffer, and complain.

The UK’s approach to billing accuracy is completely broken. On the one hand, we get some transparency around complaints data that tells us customers are unhappy, and the performance of some telcos is not what it should be. On the other hand, we have an outsourced billing accuracy audit regime that supposedly prevents this kind of breakdown of customer confidence because it demands the continuous improvement of billing accuracy. One of these regulatory activities is failing, and it does not take a genius to determine which one. Meanwhile, the regulator trolls out stats but refuses to tell the public what substantive action it takes to protect them, even when supposedly ‘investigating’ if one telco issues inaccurate bills.

Once again, the UK regulator has shown it is incapable of putting its own house in order. They cannot reconcile the claims they make about customer protection with the actual results delivered. And whenever the discrepancy is so obvious that it leads to a flood of complaints, Ofcom always responds in the same way: by saying nothing, and waiting for the problem to go away.