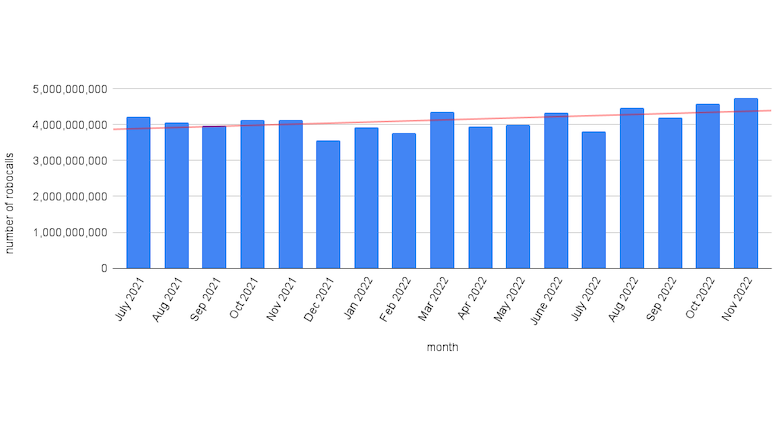 Americans received more robocalls in November than during any previous month of the year, reports the YouMail Robocall Index. The tally of 4,746,075,500 robocalls was the highest total for any month since the FCC mandated the use of STIR/SHAKEN, the cornerstone of the US strategy for reducing robocalls. The trend line, as shown above in red, indicates a steady worsening of the situation in the USA since the adoption of STIR/SHAKEN. This contradicts assertions that have sought to paint a rosy picture of robocalls being progressively reduced as a result of the methods advocated by the FCC and most US experts.

YouMail’s Robocall Index is the most reliable measure of nuisance calls received by US phones. That does not mean we should consider it infallible, because mistakes or bias can influence the accuracy of any statistic. It will always be tremendously difficult to produce reliable measures relating to telecoms fraud, anomalies in the processing of large volumes of data, or the fallibility of complex systems. The task is so hard that most people prefer to advance their careers by making absolutely no effort to tackle the challenge of measuring performance; it is easier to depend on somebody else to perform the task. This often leads to too much reliance being placed on too few sources of information, with the result that there are not enough independent measures to usefully check them against each other.

I noticed during the writing of this article that YouMail had revised their robocall figure for October, which originally reported 5,476,937,400 robocalls but was later amended to 4,572,631,800, a reduction of over 900 million. When asked to explain why the numbers were so different, YouMail graciously admitted to a double-counting error for some types of calls, and promised they had revamped their process to prevent this occurring again. It gives me confidence when professionals admit they are not perfect whilst explaining what they are doing to improve. So whilst a mistake was made, YouMail’s way of dealing with questions about the mistake stills leads me to conclude that the Robocall Index is the most trustworthy measure of the number of robocalls being received by Americans.

The measurement challenge is so great that we should be especially wary of anyone who is desperate to see whichever trends they were hoping to see. They are not checking the process for compiling the numbers they quote. They are not looking for other data that might conflict with their conclusions. And they are certainly not willing to admit that the difference between two numbers might be entirely caused by an innocent error. What matters are the trends over time, where figures are calculated using consistent methods. This gives an insight into the underlying truth that is more reliable than any specific figure derived from a single point in time.

It is to the shame of the communications industry that so many are willing to make misleading statements about the quality of information produced by machines whilst simultaneously claiming a need for increased investment in improved machines that will analyze, process and make decisions based on data. They are right about the need for investment, but liars cannot be trusted to spend that money wisely. That is why I often find myself needing to play the role of professional skeptic, to weigh against the credulity of people who choose to believe what they want to believe. But it is not contrary to observe the worsening trends in US robocalls, because the most reliable metrics do indicate the situation has deteriorated over the course of this year, even though many people have biased reasons to insist the opposite is true.