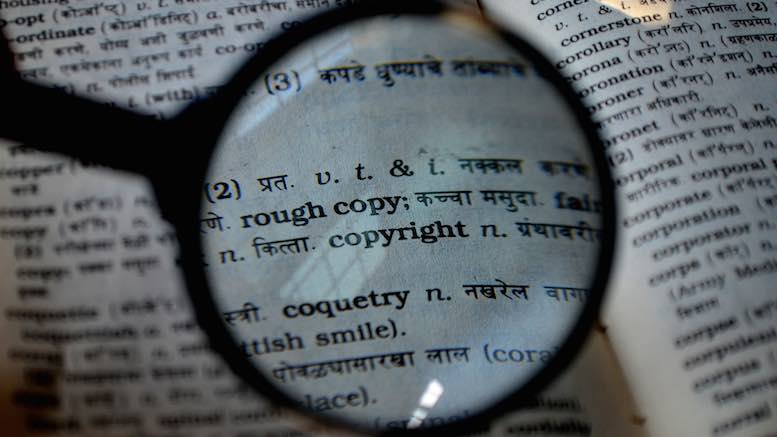 The practice of taking someone else’s work or ideas and passing them off as one’s own.

I want you to look at two diagrams, and see if you spot any similarities. The first is from a slide pack shared on LinkedIn by somebody called Gideon Ikwe. The pack is called ‘Telecom Assurance 101’ and has been seen 11,206 times since he shared it on July 9th, 2015. 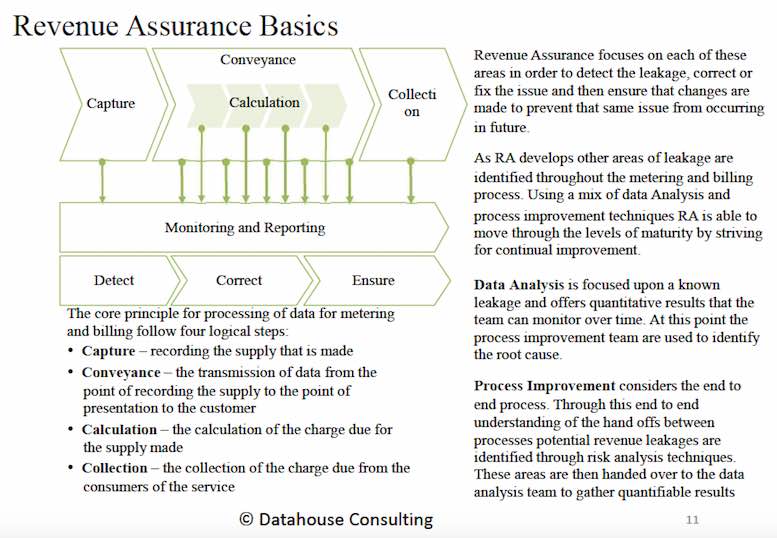 Now look at the following diagram. It was created in 2005, a whole ten years before the slide above was posted to LinkedIn. The diagram was created by KPMG for Cable & Wireless. 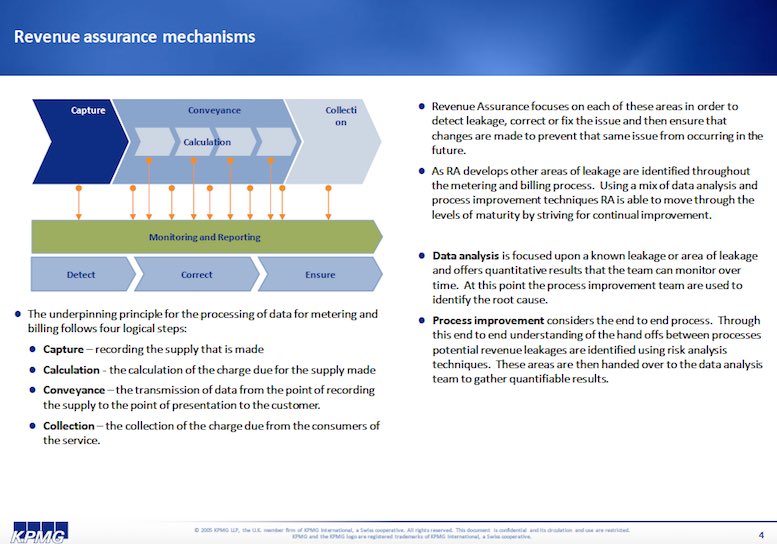 The only major difference between these diagrams is the copyright notice attached to them. The one shared by Gideon Ikwe says it is the copyright of his business, Datahouse Consulting. That is an obvious and outrageous lie. Even a child knows the difference between drawing something original and copying somebody else’s work, so I can see no good reason for Gideon Ikwe to pass off this diagram, or the associated text, as his copyright. The decision to take credit for this work is especially egregious because Gideon Ikwe sometimes cites the sources of other work he copied for his gargantuan pack of ripped-off material. There can be no argument: Gideon Ikwe is a plagiarist, copying other people’s work and passing it off as his own.

The second diagram is also inaccurate. The notice in fine print says the copyright belongs to KPMG, but that is not true. However, I cannot complain that KPMG used a template with a pro forma copyright notice on it, because this slide was created by them, under my supervision, to demonstrate the possible content of a Cable & Wireless training course that was never completed. It was never meant to be shared publicly… and yet it is now all over the internet, thanks to the efforts of Gideon Ikwe and people like him.

The actual copyright of this diagram belongs to Cable & Wireless, as they contracted KPMG to develop the material for them. It certainly does not belong to KPMG, because even if their consultants typed the words into Powerpoint, they cannot assume copyright for words that I originally wrote and sent to them. To be clear, the copyright is not mine either – when creating work as part of paid employment, the copyright belongs to the employer, not the employee. So although I wrote these words, they belong to Cable & Wireless, and the businesses that bought their company and assets.

I can take credit for the ideas. Development of the 4 C’s model began when I was at T-Mobile UK, and continued when I moved to Cable & Wireless Group. It originally began as the ‘MCC’ model, standing for metering, conveyance and calculation, as documented at T-Mobile to explain how we complied with the UK’s metering and billing (M&B) accuracy regulations. Later, whilst at C&W, I realized that we needed to extend the model to deal with the collection of payment too, which was outside of the scope of the M&B regulations but still an important source of leakage. It was then that I noticed the model would sound sexier if every word started with a ‘C’, especially as it was going to be shared outside of the UK, meaning there was no need to echo the regulator’s use of the word ‘metering’. If you want to see a later and more complete iteration of the 4 C’s model, you can buy my book. Or you can get an inferior version for free from ‘Datahouse Consulting’, then pay a scumbag a hefty day rate to come into your telco and explain it to you. After all, he is an expert at copy-paste, so must know what he is talking about…

Many other slides in Gideon Ikwe’s pack look like they have been stolen from other people. Slide 6 of the pack shows a reworking of the COSO Cube for revenue assurance, and I remember that Morisso Taieb also developed a version of the COSO Cube when he was working for Bezeq. Morisso’s diagram would have been much more colorful, which makes me wonder if Gideon Ikwe turned every diagram green to make it less obvious that they all came from lots of different sources. Slide 45, in contrast, is a rip-off of the TM Forum’s RA Maturity Model, not that Gideon Ikwe can even be bothered to cite such a well-known source. But part of the problem is that organizations like the TMF became stupidly greedy about charging people for access to content like this, whilst being pathetically lazy when copyright was abused. They might as well tell people not to join the TMF because it is so easy, and much cheaper, to steal from them instead.

Our discipline is plagued by plagiarism. The get-rich-quick clowns may pretend they are doing the world a favor, but they have destroyed all the incentive to develop and share improved revenue assurance practices. Hence several thousand people may want to thank Gideon Ikwe for sharing work that is over ten years old.

As we continue along this trajectory, it should be no surprise that awards for ‘industry leading’ RA projects are now being won by telcos in countries with such poor internet connections that they struggle to visit this website. This work can be considered ‘leading’ because so few have gone beyond what were the leading revenue assurance practices in 2005. Those few telcos that have moved forward lack any incentive to tell the rest of the world. Their improvements lead to better profits and happier customers, but they have no reason to share their work more widely, not least because the likeliest outcome is that some nincompoop will try to take credit for ideas they copied, or some business will enter themselves for a meaningless award that is handed out by people who know almost nothing about revenue assurance.

There are only two paths ahead. Either we continue to walk into the swamp of intellectual theft and recycling of old ideas, until everybody in revenue assurance deserves to be fired for doing work that is hopelessly out of date, or we reward people who innovate. There is no third option.

I know of one reason to be optimistic. If the Risk & Assurance Group (RAG) succeeds in compiling a decent library, this will ensure credit goes to the people who deserve it, not to scumbags like Gideon Ikwe. The material will be shared for free, but the copyright will remain with the donor, taking away many of the motives for theft whilst restoring the incentive for publicizing good work. And I know RAG will do what other organizations have been too weak to do, by banning individuals guilty of infringing intellectual property rights. The RAG Committee recently barred a high-profile member of the RA community because of his track record of abetting intellectual property abuse. If the RAG library can gain traction, and if we have the courage to shun the Gideon Ikwes of this world, our community might refocus on making real progress.