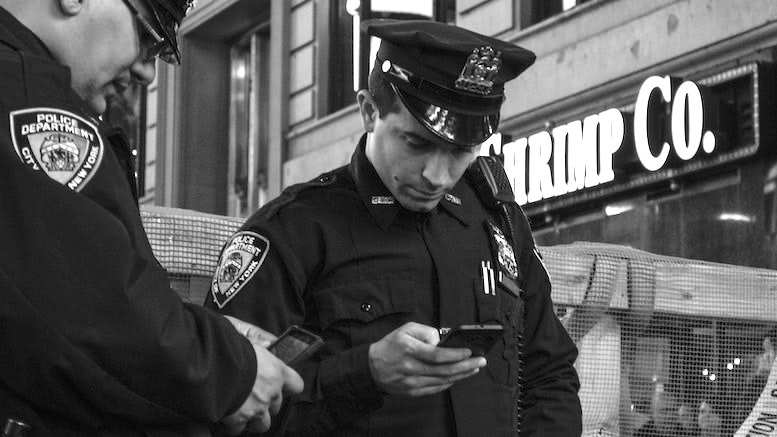 Last week The Associated Press ran a story about US police forces using a tool called Fog Reveal to monitor the movements of 250 million mobile phones. Fog Data Science LLC, the suppliers of Fog Reveal, is a business that aggregates data collected from phone apps, with a specific interest in the phone’s location. This can be used by the police to track the movement of suspects, though it also results in Fog Data Science being described as ‘dangerous’ by the Electronic Frontier Foundation (EFF). Vice followed up the story by publishing the user manual for Fog Reveal so we can all be amazed at how easy it is for average cops to perform mass surveillance without troubling a court for a warrant. But why would we find this amazing? The law is the law, and nobody passed a law to explicitly prohibit this from happening. Apps are apps and we know they are used to collect excessive amounts of data. Police are the police; they get paid to solve crimes. Revealing the widespread use of Fog Reveal may reflect a significant investigation by journalists, but it should come as no surprise that phone data is used like this.

We have long known the majority of the US population will exchange their privacy for the momentary diversion of a TikTok or because they hope a hottie will swipe right on their Tinder profile. If you give the public a more serious reason to monitor them, like determining who they have come into contact with during a pandemic, then most societies acquiesce to the use of their phones for mass surveillance and the minority of individuals who resist are treated with scorn. And when it comes to a clash between policing and privacy, we know the views of the majority. To illustrate, what follows is an excerpt from episode 9 of season 3 of The Wire, the best crime drama in the history of television.

Telco Executive: It can’t be done.
Detective Cedric Daniels: Excuse me?
Executive: The activation information you’re gonna want is not accessible until it goes to billing and that takes a few days, sometimes a week or more. But more than that, we have dozens of law enforcement inquiries every month. We get to them in the order received and currently the turnaround’s 30 days.
Daniels: 30 days?
Assistant State’s Attorney Rhonda Pearlman: Let me understand something. Your company is in business selling disposable cell phones to people who don’t have to give subscriber information at the time of purchase, correct?
Executive: Correct.
Pearlman: They buy these phones and as far as you’re concerned they use them anonymously, pre-paying for their minutes.
Executive: From the retailers, yes.
Pearlman: And while they’re using these phones anonymously for whatever purpose, they can’t be monitored by law enforcement because your company can’t react within a month to a court order for a wiretap?
Executive: We do the best we can.
Daniels: This is bullshit. You’re selling a phone that you know is effective for drug trafficking.
Executive: Lieutenant, our prepaid inventory is there for young people, college students and such, people who can’t afford a permanent cell phone plan.
Pearlman: What college student can’t afford a cell phone? They can afford the fucking college, they can afford the phone that goes with it.
Executive: I resent the suggestion.
Pearlman: Just so I’m clear, you’re telling me that even if by some miracle we are able to get up on a drug dealer’s disposable cell phone in time to catch him talking, you’re gonna take a month to activate our tap.
Executive: If you have a problem with that, your office can contact our general counsel. That’s all I can say.
Pearlman: How about this? How abut the State’s attorney calls a press conference on the courthouse steps to declare that Bay Wireless is in league with violent drug traffickers in the city, preventing their apprehension and arrest by law enforcement?
Executive: Four to five days turnaround. Best we can do.

That episode of The Wire was first aired on November 21, 2004, but apart from the emergence of a fringe political movement that demands the defunding of police there is little reason to believe the attitudes of Americans have changed much. The show’s writer, David Simon, was a police reporter, giving him a solid grounding in police procedure, though he obviously lacked a realistic sense of the effort made by telcos to assist the police. The Wire is fairly typical of US fiction according more respect to criminals than to the employees of phone companies. Drug dealers and murderers are presented as well-rounded individuals, some of whom are smart, ambitious and morally principled in their own way. Telcos, in contrast, are generally presented as grasping businesses run by sleazy people. The Wire portrays the fictional Bay Wireless as obstructing the efforts of hard-working police detectives until they eventually, reluctantly, hand over personal data they should have provided willingly.

This corrosive portrayal of telcos as obstacles to justice rests upon the more basic caricature of businesses only caring about profit, despite the fact that the people who work for a business are no different to people working anywhere else. This encourages cynicism about the extent to which profit is being made by accumulating and selling data about consumers. We should not be shy of the fact that some people in business are immoral, but the use of Fog Reveal by police forces shows how taxpayers’ money is incentivizing abusive business models. The vast majority of businesses work within the framework provided by law. When law enforcement agencies can successfully work around rules designed to prevent unjustified surveillance then society should question why legislators allow them to behave like this. The sad truth is that the answer is usually related to the fact that voters chose to elect those legislators, often because they share a value system that disregards privacy whenever it is not considered expedient.

It is likely that the use of Fog Reveal will prompt a fight about whether it represents a violation of the USA’s constitutional laws. The EFF and others argue that it violates the Fourth Amendment, which protects Americans from unreasonable searches and seizures. The Fourth Amendment has already been interpreted as prohibiting the mass seizure of location data from telcos, so the EFF believes this should also apply to the police purchasing personal data from brokers. The EFF also argues that using Fog Reveal to track the movements of people not accused of a crime is an infringement of the First Amendment right to free assembly. But perhaps the EFF’s strongest argument is that the Electronic Communications Privacy Act (ECPA) passed by the state of California is being broken when data is purchased without obtaining a warrant from a court.

Whilst the EFF and most US lawyers start by focusing on the US constitution, my thought process begins somewhere else. California’s ECPA shows it perfectly possible to pass specific laws that clearly articulate the extent and the limits of freedom in today’s world. It is not necessary to keep going back and reconsidering the words of people who lived 200 years before the first mobile phone call. The framers of the US constitution may have been astoundingly intelligent people with unusual foresight, but we should not expect them to have anticipated every eventuality. New laws can be passed today, and these laws can save a lot of time and trouble involved in interpreting the constitution, as illustrated by California passing the ECPA in 2016. The privacy problems faced by US citizens do not stem from the supposed greed of telcos or other businesses, or from the cost-cutting, time-saving instincts of police forces, or even from the casual way phone users hand over their data. It stems from a broken political process that refuses to pass and enforce the simple, consistent national laws that everybody needs in order to have a straightforward understanding of what is allowed and what is forbidden.

I like my privacy. You might like your privacy. But the truth is that we are in a minority. Liking privacy is different to liking ice cream or wanting other people to like you. Privacy will never be a source of instant gratification although we live in societies where most people want instant gratification every day. Many obtain such gratification through an app on their phone, which is why they give away their data with so little concern for how it will be used. To like privacy requires the imagination to think ahead to the potential consequences if privacies are violated. The same discipline is required when devising a system of laws. The law needs to change from time to time, sometimes in response to technological progress, but we all benefit if emotional arguments about whether something is right or wrong in a particular instance are sublimated into a consistent series of rules that we all know how to follow in practice.

Those of us who live in democracies can show how much we care about privacy by preferring legislators who will protect privacy even when it conflicts with other goals, such as reducing the cost of policing. We should vote for legislators who will stop mucking around and will push for meaningful privacy laws at a national level. They can be difficult to find in the USA, which also means privacy advocates should actively encourage better candidates to compete in elections. This would deliver greater long-term benefits than engaging in endless niggling arguments about how to interpret constitutional law. There is a price to be paid when pursuing changes to the law, and lovers of privacy will be conscious that they will not win every legislative battle. But in some cases it seems that we are not even trying to compete.