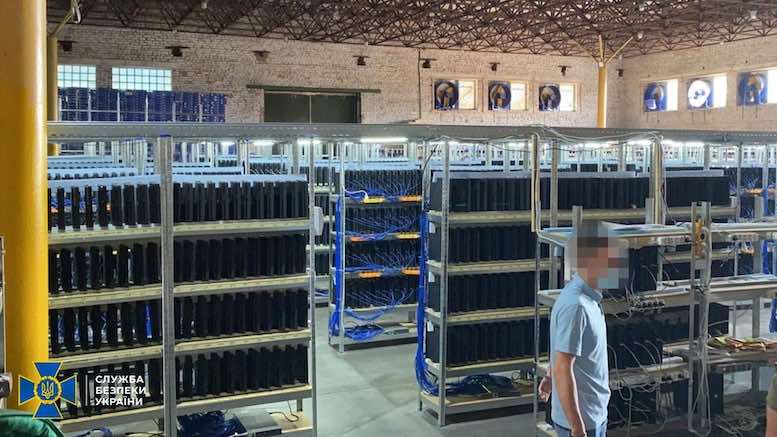 An investigation by the Security Service of Ukraine (SBU) into the theft of electricity uncovered a warehouse where 3,800 consoles were robotically playing games to earn in-game currency reports Delo (in Ukrainian). The SBU, which is Ukraine’s leading counterintelligence agency, had expected to bust a cryptocurrency mining farm but instead discovered rack after rack of Sony Playstation 4 (PS4) video game consoles (pictured). The consoles were continuously playing FIFA 21, the football simulation by Electronic Arts (EA), in order to earn the in-game currency.

The ‘ultimate team’ component of FIFA 21 allows players to engage in transactions to obtain legendary footballers for their virtual teams. One method involves using ordinary money to gamble on buying a loot box with unknown contents, although there is only a tiny probability of a loot box containing one of the most desirable footballers. The alternative method delivers more predictable results to users because it involves spending an in-game currency called FUT coins during in-game auctions for specified footballers. The best footballers are highly prized as they will give an advantage during online player-vs-player games, but users must devote many repetitive hours to playing FIFA 21 to earn more FUT coins, leading to the creation of a black market for the coins. All black market trading in FUT coins is prohibited by EA. However, users who turn to the black market may find themselves spending approximately USD50 to buy enough FUT coins to then obtain Barcelona and Argentina star Lionel Messi during an in-game auction.

I wrote about the risks surrounding currencies and transactions within video games for one of the first articles on this website, published almost 15 years ago. It does not matter if a currency is ‘real’ because it has value so long as real people behave like it has value. That then leads to risk, whether it is a leakage-style mistake affecting the amounts in online wallets, thus causing losses for the game makers or their customers, or the risk that the game currency is subject to frauds and other unlawful enterprises. The skills gained by risk professionals working to secure more orthodox transactions for networked businesses can equally well be applied to the context of video game currencies.

This Ukrainian operation was discovered because of fraudulent accounting for the electricity used to power the PS4s, but EA also suffers financial losses because the black market suppliers of FUT coins are effectively competing with EA’s loot box sales. In addition to the financial leakage, this kind of fraud is bad for honest customers who may question why they should stick to the rules after losing to online players that cheated to obtain a superior team. A smart operation should not find it difficult to identify the inhuman behavioral patterns manifest when thousands of robots all accrue in-game currency in exactly the same way. It has been many years since the first signs of problems with video games that have their own currencies, during which time the video gaming industry has grown to be worth more than USD300bn per annum globally. That fraudsters continue to exploit in-game currencies is confirmation that games manufacturers are still not taking the associated losses seriously.