This week talkRA experimented with its first opinion poll. Not knowing how popular it would be, I had no idea how long to leave the poll running. The response was astounding. The poll has been closed already, because it reached the limit of the votes allowed by my freebie polling account. In fact, we reached the limit yesterday, within less than 72 hours of the poll going live!

The question was whether revenue assurance and fraud management should be combined in a single department; delivered by two separate functions; or if this was a stupid question, because the right approach depends on the specific circumstances of the telco. ‘Stupid question’ was the clear winner. 45% felt that the appropriateness of combining the RA and Fraud Departments would vary between telcos. The other votes were evenly split, with equal numbers favouring combined and separate departments. To make it look more official, here is the chart… 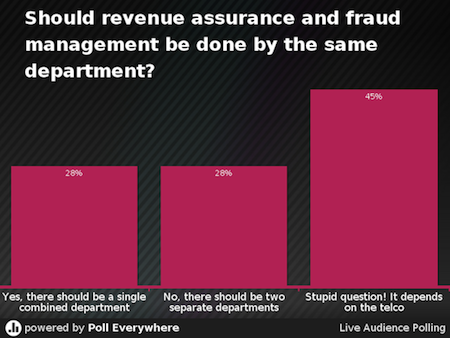 What have I learned? Arguments about the benefits and disadvantages of combining revenue assurance and fraud management continue to split opinion in the industry. On the other hand, many have a pragmatic attitude, willing to believe that the best approach in telco A may not be suitable for telco B.

Also, I learned that when we do polls, we should aim to run them for a short and well-defined period. And I learned not to ask stupid questions in future!

Given the response to this poll, talkRA will be doing more in future. And as you seem really keen to respond to surveys, feel free to suggest questions that you would like to ask the community.