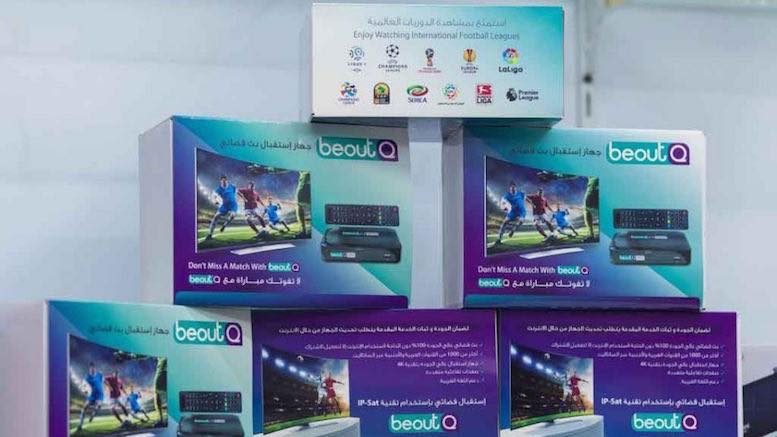 Regular readers know that sports fans in Saudi Arabia and a few other Gulf countries have been watching beoutQ, a popular pirate television service that simply re-streams the live sports coverage broadcast by Qatar’s beIN Sports. The beoutQ service can be watched via the internet, and the Qatari authorities also allege beoutQ is transmitted via the satellites of Arabsat, the Saudi-based Arab Satellite Communications Organization. There has been no response to previous Qatari complaints, with the consequence that world football governing body FIFA also threatened to sue over the piracy of World Cup games. Now the Qataris have taken the next formal step available via the World Trade Organization (WTO) by demanding dispute consultations with Saudi Arabia over the infringement of the intellectual property of beIN Sports and the various rightsholders for the sports they broadcast. The WTO announcement states that “the request was circulated to WTO members on 4 October”, though no dispute panel has yet been established.

For a more detailed recap of the piracy accusations, here is an extract from Qatar’s WTO filing:

Despite extensive evidence of involvement of Saudi nationals, entities and facilities in the distribution of beoutQ throughout Saudi Arabia (and beyond), the Saudi authorities have refused to take any effective action against beoutQ. Instead, the Government of Saudi Arabia (including both the central and municipal governments) has supported beoutQ, including by denouncing beIN’s requests to investigate and prevent the pirate’s unauthorized broadcasts, and by promoting public gatherings with screenings of beoutQ’s unauthorized broadcasts.

The Saudi authorities’ support of beoutQ has also taken the form of restrictions on, or other acts or omission that frustrate, beIN’s ability to pursue civil actions before the Saudi courts. Through a variety of means, including by preventing independent Saudi legal counsel from representing beIN in Saudi courts, the Saudi authorities have prevented beIN from accessing enforcement procedures against infringement of its intellectual property rights.

The copyrighted materials captured by beoutQ’s unauthorized broadcasts encompass not only works created by beIN itself, but also works created by content providers from around the world, including the United States, the European Union and its Member States, and Switzerland, which have provided exclusive licenses to beIN for the Saudi Arabian market.

This extraordinary instance of wholescale international piracy stemmed from the regional diplomatic crisis that began in June 2017 when Saudi Arabia and some other countries decided to break diplomatic relations with Qatar. Ordinary Saudis do not enjoy as many entertainment options as residents of other countries, and they are passionate about watching sports, taking a special interest in major football competitions like the World Cup and English Premier League. One of the reasons for the Saudi embargo of Qatar is the editorial policy of Qatar’s Al Jazeera news channels, making it politically necessary to also block beIN Sports, a subsidiary of the Al Jazeera Media Network. However, blocking sports TV would be unpopular with fans, so the piracy of Arab-language international sports coverage doubtless proved to be an attractive workaround.

It is unclear who owns beoutQ or where it is based, though the broadcaster is widely available in Saudi Arabia. Following accusations of piracy of beIN content in Saudi Arabia, a Saudi official said in June the kingdom had confiscated about 12,000 pirating devices from the market.

There is no doubt that TV piracy on this scale is worth huge amounts of money. In concert with the Qatari government’s escalation at the WTO, the beIN Media Group announced they are seeking over USD1bn in compensation.

…beIN Corporation (beIN), today launched an international investment arbitration against the Kingdom of Saudi Arabia for damages totalling more than US$1 billion, having been unlawfully driven out of the Saudi market and subjected to what has been described as the most widespread piracy of sports broadcasting that the world has ever seen. The landmark case is the only known investment arbitration ever to be brought in connection with State-supported illegal broadcast piracy. The arbitration is being commenced following universal public condemnation of the Saudi-based pirate TV channel beoutQ which – in tandem with Riyadh-based satellite provider Arabsat – has orchestrated a plague of piracy on world sports and entertainment over the past year.

beIN asserted that the use of satellites for piracy had been proven by independent experts.

Earlier this year, for the first time in more than 10 years, the US Government placed Saudi Arabia on its 2018 Special 301 Watch List, noting concerns over the deteriorating environment for the protection of intellectual property. Pressure intensified further on Saudi Arabia in August when three of the world’s leading digital security, media solutions and technology companies, Cisco Systems, NAGRA and Overon, independently and definitively confirmed that beoutQ is being distributed on the Riyadh-based satellite provider Arabsat…

To further gain public sympathy beIN even created an ‘infographic’ showing a comprehensive timeline for the TV piracy (downloadable from here) but it is so detailed you need to zoom in to follow it!

Tensions are running high and the language is hyperbolic, but the Qataris may be correct to assert that this is the biggest case of sports TV piracy ever. National pride is at stake, as well as a lot of money. The outcome will establish some important precedents for the valuation of intellectual property distributed by 21st century networks. And the WTO may find this to be one of the most vexing trade disputes they have yet had to deal with.