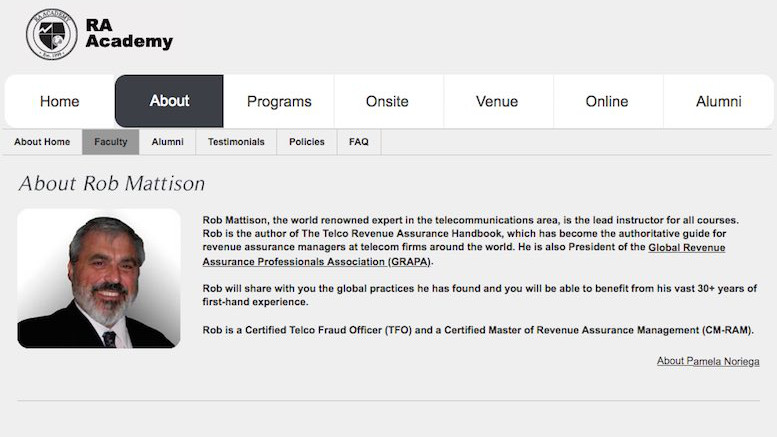 Longstanding readers know what I think about ‘Papa’ Rob Mattison, the man who announced in 2007 that he was the President of a supposedly global association that nobody had previously heard of, and which was variously run by members of his family, a local school student, a gym teacher and a charity fundraiser. Over the years he trained many students by telling them what he thought about stuff whilst asserting that his courses had been ‘ratified’ by nameless telcos, and reflected industry ‘standards’, although he exclusively owned all the copyrights. Who could argue with the man who called himself President, even if he bestowed that position on himself? But now it seems the President of the Global Revenue Assurance Professional’s Association (GRAPA) is no longer claiming to be the President of GRAPA. A co-conspirator forwarded the following message he received from Mattison through LinkedIn, showing that the ex-President has dropped his grandiose title and is now just presenting himself as an “executive consultant”.

Further investigation reveals that Mattison has not just resigned from the role of President. Mattison’s LinkedIn profile now makes it look like he was never the President of GRAPA. Is that because he pretended he had been appointed by the acclaim of his peers, when the reality is that nobody else could be appointed President because Mattison owned GRAPA? The snippet shown below implies Mattison never called himself anything other than a ‘specialist’.

The problem with lying a lot, whilst also promoting yourself a lot, is that when you change your lies it is easy for others to highlight the deception by observing all the inconsistencies in your lies. For example, the RA Academy, another name for GRAPA and Mattison’s training/consulting business, lists Mattison as a ‘faculty member’ (pictured above), saying he…

This is no accident. The WHOIS search for the owner of RA Academy website confirms it belongs to XiT, another of Mattison’s business fronts.

Finding evidence to mock this buffoon is easy because he created so many websites to boost his search ranking and used so many social media platforms to find new students. Although Mattison ultimately failed in his attempt to spam Wikipedia, he stooped so low that he once listed GRAPA in a free online dictionary, which then cited examples of the use of the word from so-called ‘periodicals’ that were actually his websites… and most of the quotes also refer to Mattison as being President of GRAPA! However, if you google “Rob Mattison GRAPA President” you will find a lot of his old websites are now defunct, and have been taken over by criminals trying to trick you into downloading malware. That is not a good advert for a man who trains people in cybersecurity.

Mattison was so relentless at using the internet to promote himself that he even created a second LinkedIn profile for himself. Perhaps he forgot to delete it, but can you guess what title he gave himself there?

Though Mattison could theoretically spend ages rewriting all his old websites and old social media profiles to hide the truth, if his boast of training thousands of people is correct, then all those students will remember they were trained by the President of GRAPA. And even if Mattison exaggerated the number of people he trained, there are still plenty of websites that Mattison cannot edit because he persuaded other people to refer to him as the President of GRAPA, including:

All those press releases about GRAPA boasted about President Rob Mattison running a genuine association with thousands of professional members around the world. It is comical to see that Mattison is now trying to rewrite his career history before attempting to connect with total strangers via LinkedIn.

Apologies to any students who received training from Rob Mattison and GRAPA, but if your former President is now pretending he was never your President, what does that say about the value of those training certificates you bought from him?