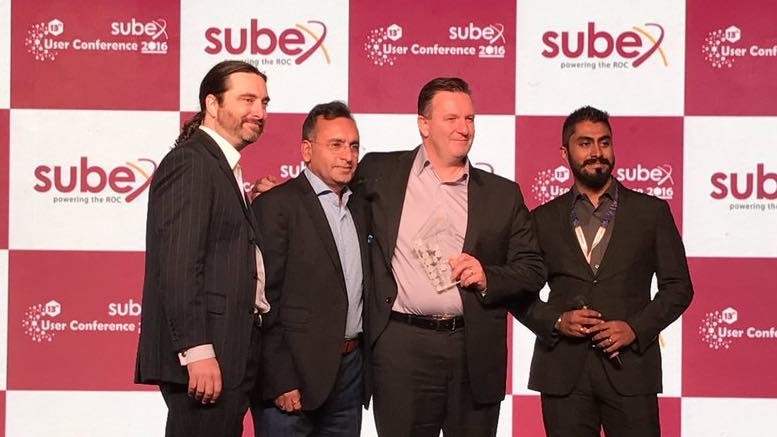 Subex are sponsors of the annual excellence awards for revenue assurance and fraud management, and the 2016 winners were announced at the Subex User Conference last week. The victors were:

The awards were decided by an independent panel of expert judges, including Mark Broom of Orange Group, Suzanne Hodges of Time Warner Cable, and Dan Baker of Black Swan. The fourth and final member of the panel was some chump who happens to edit Commsrisk.

I found it telling that a panel composed of two Americans and two Brits decided to pick winners from Africa and the Middle East. For RAFM it is no longer true to suggest that West must always best. We are witnessing a change in leadership as the most advanced risk and assurance work is increasingly performed in markets where telcos have to deal with intense competition whilst rolling out a plethora of non-traditional services using new technologies supported by minimal budgets.

Tony Sani (pictured above, second from the right) beat high-profile competition for his prize, including a shortlisted nomination for Bernice DeMarco of BT Group, the champion and host of this year’s Risk & Assurance Group Summer Conference. His victory was secured thanks to two MTN management initiatives that have already influenced other telcos and are likely to have a lasting impact on our discipline. These are:

The inspiring nature of the MTN Group RAFM education program was underlined when Subex CEO Surjeet Singh (pictured above, second from the left) promised his company would make a substantial financial contribution to any body which could repeat MTN’s success by improving the quality of training available to RAFM practitioners.

Accepting the innovation award on behalf of Kuwaiti operator Viva, Financial Control Director Sai Devata explained how Viva’s team had extended the scope and work of RAFM in several directions simultaneously. They had widened their responsibility to embrace new areas like inventory management and commission payments. They had also upgraded automated systems whilst outsourcing some of the work in order to access the best skills available on the market.

These were impressive winners. Viva Kuwait’s ambitious reformation of their assurance work has raised the bar for other telcos, whilst Tony Sani’s contribution will impact our discipline in ways that we will struggle to quantify for years to come. They deserve the recognition that comes with these awards for RAFM excellence.