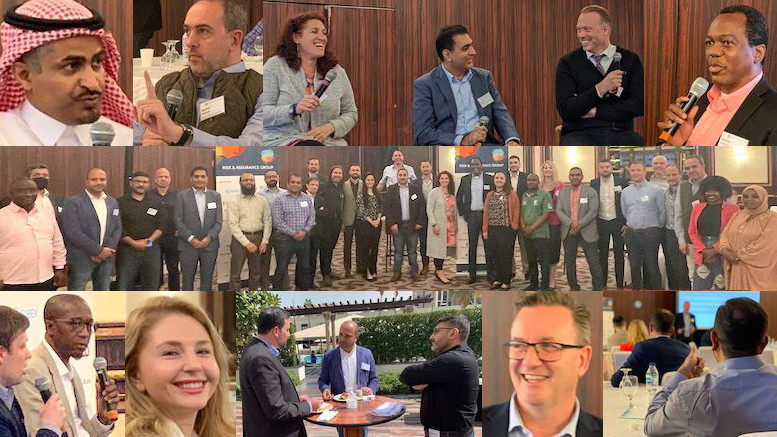 I never like to ask attendees of conferences to congregate for group photos because there is never a good time to take them. The audience is typically largest during the first morning, but you also want to make a brisk start with delivering all the content that has been scheduled. To begin with slack timekeeping is rude to all the speakers who come later. The priority at conferences organized by the Risk & Assurance Group (RAG) is to devote as much time as possible to hearing voices, in the forms of questions from the audience and answers from the speakers. This goal is not helped by lining people up just so a photographer can see their faces. As typical of RAG, we reached the end of last week’s Dubai conference without making any effort to arrange a group photo, at which point the remaining attendees rebelled and demanded that one be taken! The audience is always right, and you can see the results above.

With a final tally of 64 participants, RAG Dubai was not the biggest conference that RAG has ever organized. However, the presence of managers from Batelco, Comores Telecom, Du, Etisalat, Expresso Telecom, Red Bull Mobile Saudi, Go, Omantel, PMCL Jazz, Salam, STC, Telekom Networks Malawi and Zain Bahrain showed the strength of demand for in-person conferences. Not everyone feels the same way about the relaxation of pandemic restrictions, but more than half of RAG’s natural audience want to meet in person again. This was emphasized throughout RAG Dubai, with numerous people openly saying how glad they were to be at a proper conference after the long hiatus. Though the number of attendees was 40 percent lower than we attracted to RAG Bahrain 2019, the extent of social media activity during and after the conference reached unprecedented heights. Here are just a few examples of comments posted online by attendees and non-attendees.

“Good to see people getting back together like old times”

“thank you for the wonderful conference”

“Looking forward to the next f2f conference, I missed a good one here”

“A great learning day spent with talented Telecom professionals… Thanks to all organizers, speakers and coordinators…”

“Keep up the good work”

“RAG Dubai 2022!! It was an immense pleasure to share thoughts with the Market Leaders.”

The message is clear. As with the taking of the group photo, RAG will defer to the will of the majority by returning to a normalized program of physical conferences across all continents as soon as local laws permit.

Mobile World Congress begins next week, and I suspect this will serve as the threshold for returning to conventional in-person conferences across the telecoms industry. Telecoms bosses have imposed bans on travel and meetings in the name of employee safety but that will start to ring false after they risk flying half way around the world to be in the same venue as 50,000 other people. In some ways the world would be better if all business was conducted online, but if this objective cannot be realized by telecoms executives or governments negotiating climate change agreements then it is unlikely to be realized by anyone else. Some readers would prefer all conferences to be exclusively online, but as I discussed in another article, RAG cannot succeed by attempting to force everybody to use only one mode to share content and foster engagement. Professionals who want to shift more content online have my utmost respect – this website dates back to a time when arranging a conference call could be a hassle. However, RAG will lead the community whilst remaining in step with it. That means planning for the broadcast of a fourth season of RAG TV after the completion of RAG’s next in-person conference, to be held at the University of New Orleans on April 5 and 6.

Such strong demand for the return of in-person conferences leaves me baffled by rivals that still have not announced their next face-to-face meeting. The social media accounts of some of the staff of these associations shows them happily visiting exotic locations for holidays, so they must have received their vaccinations and stopped fearing the spread of disease. Given that COVID-19 first started interfering with conferences in February 2020, how can those associations afford to pay the salaries needed to fund lavish lifestyles when their only work appears to be arranging an occasional phone or video call? It has always been the case that some profited by deliberately confusing small cliques with global communities. There were already signs that groups like these were suffering falling attendance before the pandemic struck. Travel bans and lockdown restrictions have helped them to disguise their problems, which perhaps explains the reluctance to schedule new in-person events. It suits me if they continue to behave like arranging a few YouTube streams is a full-time job. This represents terrible value for the members that pay their wages but spares me any competition for all those professionals eagerly wanting to return to face-to-face networking.

RAG prevailed in Dubai, as demonstrated by the number of individuals calling for us to return to the region in 2023. However, our next mission is to take New Orleans. Victory in the USA is now essential; there are some serious issues that require genuine debate and compromise of a kind that will never be achieved online. Now is not a good time for telco risk, security, fraud and assurance professionals to be divided, though it is difficult to come together to tackle issues like robocalls and the spike in frauds targeted at consumers. Too much reliance is placed on regulators who are tasked to impose a consensus on all telcos. The result is that numerous telcos have become increasingly vocal and agitated about the flaws in the methods being forced upon them. We need to bring together leaders in the US and Canada with their peers from telcos overseas, so they can find workable solutions that everyone is willing to accept. RAG has to do this because others lack the ambition to bring a wide enough range of people together. Otherwise there is a danger that necessary dialogue degenerates into nothing more than the conversations held by cliques who are never forced to leave the comfort of their online bubbles. It grates to repeatedly hear some individuals boasting of their ‘international’ organizations formulating a ‘global’ plan to reduce robocalls when they sit on bodies that do not include a single Asian, African, European or Latin American.

RAG’s last visit to the USA included a grand panel of many of the architects of the country’s current anti-robocalling strategy. That was a hard-hitting session, but we let the global community down by not involving enough voices from risk and fraud managers working for foreign telcos. I intend to correct that mistake with a follow-up panel that initiates a vital conversation about what it is fair for the US to demand from foreign telcos versus the point at which US-imposed burdens becomes untenable costs for consumers in foreign countries who will receive no benefit. It would be an understatement to say this conversation will be difficult. But with some US-based associations simply not knowing how to engage with foreign telcos, and some vendors making the mistake of thinking they only need to wait for the US government to impose its will on foreign regulators, now is not the time for telco fraud, risk and security managers to remain silent. Wherever you are from, if you can join us at RAG New Orleans on April 5 and 6 then I recommend you do.