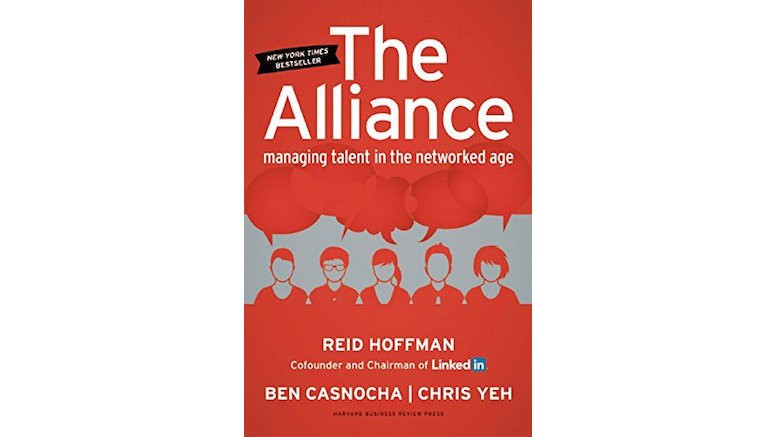 If you like big ideas from a hi-tech guru, Reid Hoffman is your man. From his involvement in PayPal to co-founding LinkedIn, Hoffman has become the apotheosis of our networked future. How much so, and where his vision may take us, was described by Nicholas Lemann in a piece about Hoffman, entitled “The Network Man”, which appeared in The New Yorker. Hoffman believes networks will be the central organizing feature of our social fabric. His book, The Alliance (pictured) is a best seller. Figures from President Obama downwards seek his counsel. Whether we should be giving Hoffman a Facebook “Like” or “Dislike” for his vision, his thinking is worthy of further attention.

Hoffman’s view of the current moment in transition goes something like this. For the first two-thirds of the 20th century, economic life was centered on organizations, most notably the corporation, government bodies and labour unions. For the middle class, the payback was a secure job, health and a pension. It was about Main Street and not about Wall Street. But beginning in the 1970s, wages stagnated for many employees, corporations became more and more the handmaidens of financial engineering, and Wall Street began to take on an oversized place in the economy, with too many of the benefits going only to a select few. Inequality replaced security as the defining characteristic of the work place. For Reid, the solution rests with networks. In the words of Lemann:

Hoffman is convinced that we can fix the problem through Internet-enabled networks. Work is already becoming more temporary, sporadic, and informal, and this change should be embraced. Many more people will become entrepreneurial, if not entrepreneurs. The keeper of your career will be not your employer but your personal network — so you’d better put a lot of effort into making it as extensive and as vital as possible. A twenty-first-century version of William H. Whyte’s memorably titled 1956 book “The Organization Man” would, by Hoffman’s logic, be called “The Network Man,” and this virtual structure would define the age as fully as the big corporation defined the earlier age.

Lemann describes Hoffman as the Ubernode, “the world’s most networked person.” Not surprisingly, Hoffman views LinkedIn as “the enabling device for the emerging era.” Among those who attentively listen, in addition to President Obama, are the likes of George Osborne, the UK Chancellor of the Exchequer, and Ban Ki-moon, the Secretary-General of the United Nations. Hoffman is a bona fide guru with a bold view about the world of work and employment and how the re-empowerment of the middle class will be refashioned by this vision of the role of the network. But the article itself raises doubts, emanating from Silicon Valley itself, over whether Reid’s vision will come to pass and the middle class will thereby regain its “fair share”. The following is representative of the skeptical view held by some. Thus, Joe Kraus, who works for Google’s venture-capital division and who is a long-time friend of Hoffman, told Lemann:

My instinct is that creating the valley elsewhere hasn’t been successful. It would be presumptuous to say, ‘Of course it will work elsewhere.’ I just don’t know.

More pessimistic is the view held by John Lilly, a partner of Hoffman at the well-known investment fund, Greylock Partners:

I’m more lefty than your typical Silicon Valley guy. I believe actions have consequences, and shit like that. Clearly, wealth is becoming more concentrated, and the network takes a larger and larger share.

He (Lilly) suspects that the twentieth century was an anomaly. ‘There was no middle class, then there was a middle class, now we’re back where we started—it’s hollowed out. I don’t see where the middle class is going to come from. You’ll start seeing more conversation about a guaranteed income.’

Mike Maples, the well-known co-founder of VC fund Floodgate, also expressed doubts. Maples recounts that in his meeting with Glenn Beck, a prominent conservative talk-show host, he was surprised to find that:

Beck was concerned about how his audience would be affected by the economic future that Maples was describing. He said, ‘What do you say to a guy like me? How do you answer the argument that there are forty million people in red states who are going to get displaced?’

Lemann paints a picture which, if not dystopian, is hardly upbeat. He writes:

Hoffman’s new world of online platforms, marketplaces, and networks produces companies that emerge from the brutal competition among startups as big top-down organizations with quasi-monopoly status: Amazon in retailing, Facebook in social networking, Google in search, LinkedIn in business networking. Once network effects really kick in, they create a powerful barrier to entry for potential rivals: the more effort you’ve put into your identity on Facebook or LinkedIn or YouTube, the more difficult it becomes for you to switch to a competitor. One of Peter Thiel’s favorite bad-boy notions is that competition is “antipodal to capitalism”: once a company becomes successful, it should try to establish a monopoly position, so that it can charge the kind of prices and make the kind of profits that are available only to companies without meaningful competitors.

Perhaps one class of people will live inside big companies, and a larger class will be part of a looser networked community. The more sincerely you believe that a better world is emerging from this process — a world of rapid improvement in the lives of billions of people — the more wholeheartedly you can work to hasten its advent. It’s hard to imagine that there could be a truer believer than Reid Hoffman.

Or perhaps such claims simply distort the notion of “community”. When is “a looser networked community” no community at all, but merely a lot of people desperately trying to make ends meet?

And then there is intellectual property or, more accurately, the absence of any reference to it, in Lemann’s piece. For Hoffman, at the end of the day, the intangible asset that really matters is the network. If so, perhaps, as a value proposition, networks will become the new intellectual property.

This article was originally posted on the IPKat by Neil Wilkof. It has been reproduced under a Creative Commons CC BY 2.0 UK Licence.

Swipe Left to Sue Robocallers: Is This App a Scam?